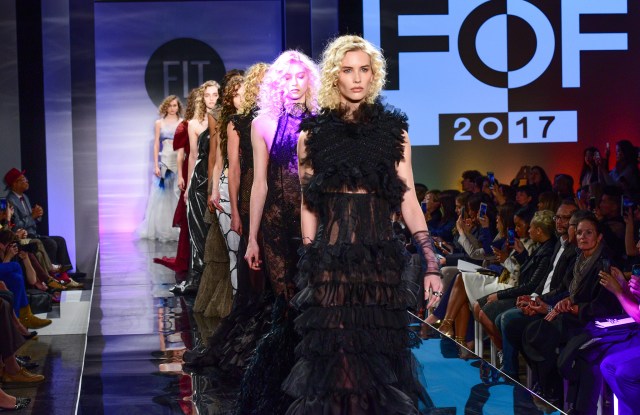 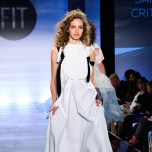 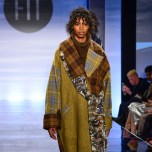 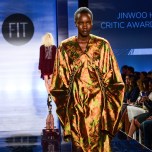 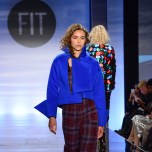 NEW YORK — With an emphasis on innovation, The Fashion Institute of Technology presented “The Future of Fashion” runway show Monday night showcasing the work of its graduating fashion design students.

Dedicated to FIT alumnus Calvin Klein, the show was presented by Calvin Klein Inc. and the Calvin Klein Family Foundation, which supports FIT’s School of Art and Design and the BFA program.

Among those in the audience were John and Laura Pomerantz; Stefan Larsson, who came with his 10-year-old daughter; Ken Downing, senior vice president, fashion director of Neiman Marcus; Sophie Theallet; Chris Gelinas; Jill Granoff; Dennis Basso; Fern Mallis, and Valerie Steele, director and chief curator of the Museum of FIT.

Joyce F. Brown, president of FIT, introduced the show and a short video presentation featuring students, professors and designers such as Carolina Herrera discussing the future of fashion and what goes on behind-the-scenes of creating this runway show.

Throughout the spring semesters, designers such as Gelinas, Theallet, Isabella Tonchi, Karen Sabag, and Flora Gill mentored the students as they created their collections. The students were then judged by industry professionals including Downing, Nicole Phelps of Vogue Runway, Lilliana Vazquez of “Today,” Diana Tsui of New York magazine’s The Cut and stylist Kemal Harris.

The students sent sportswear, knitwear, intimate apparel, children’s wear and special occasion looks down the runway, and once again, the cute child models who strutted down the catwalk in their pint-sized outfits stole the show.

Some students incorporated high-tech details, such as People’s Choice Award winner Shannon Cooney, who showed a white nylon ski jumpsuit with quilted details and LED lights with a programmable pattern.

The knitwear was particularly strong, such as those designs by Critic Award winner Yekaterina Burmatnova, who incorporated statement-making hardware into her oversize off-the-shoulder hand-knit sweater with straps and gunmetal rings, with a washed wool skirt with knit-in godets and needle felting detail. Another standout was Critic Award winner Aleksandra Gosiewski’s ivory hand-knit turtleneck sweater and ivory mohair drop-stitch texture pants.

“I always love to see it,” said Basso, an FIT graduate. “It’s great to see young people interpreting what they think is new and fresh and different. Although you may not personally love every single thing, it’s an expression of creativity. You don’t know where their journey will take them. It was so creative. The eveningwear and lingerie were stellar.”

Downing, added, “The intimate apparel every season is such a standout at this institution. It’s as fine as anything you can find in a showroom in New York or Paris. The craftsmanship is like haute couture.”

He also thought the eveningwear was a standout, and the knitwear was strong, too. Among the big themes were deconstruction, rebel and punks of 1976. “People are expressing their opinion. There’s such a sense of individuality. It’s not about everyone following everyone else’s ideas. It’s a real sense of you.”