FIT Salutes Its Stars at The Rainbow Room 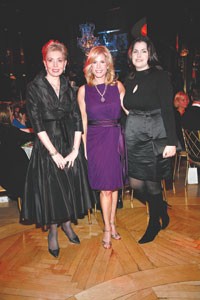 The dinner included a silent auction, and the proceeds went to help fund FIT scholarships and housing. The executive director of the alumni association, Vicki Guranowski, said the awards ceremony, now in its 16th year, is the top moneymaker for the group, generating almost $200,000.

Katie Couric kicked off the reception via DVD and introduced Steffe, saying, “If clothing choices speak louder than words, I have already revealed my love and admiration for her tremendous talent over the years by my wardrobe choices.”

Fern Mallis, vice president of IMG and creator of 7th on Sixth as well as a friend of Steffe, followed Couric and quipped, “We all appreciate that Katie took the time from her crazy schedule to acknowledge and congratulate Cynthia — it just doesn’t look like she remembered to wear Cynthia Steffe when she recorded it.” Mallis presented Steffe with her Star Salute Award.

Though Steffe did not attend FIT (she graduated from Parsons), she has taught at the school. “It’s wonderful to be honored by such a great institution,” she said.

Alan Geller, president of TeriJon, presented Freeman with her award. She expressed her “profound gratitude” for previous alumni who enabled her, as an 18-year-old Israeli immigrant, to attend FIT on a full scholarship. “Because of their generosity, I was able to acquire the technical skills and harness my creativity to sustain a career of 35 years,” she said.

Freeman presented the school with a scholarship fund in her own name so that talented students might have the same opportunity she did.

Herbert was introduced by Leatrice Eiseman, executive director of the Pantone Color Institute, who insisted that if Herbert were a color, she’d be “chili-pepper red.”

“It’s truly awesome to be standing here with Cynthia and Rickie…they are fashion icons, and coming from Pantone, where we’re sitting on the periphery [of the fashion industry], it’s really nice to be in the company of these ladies,” Herbert said.