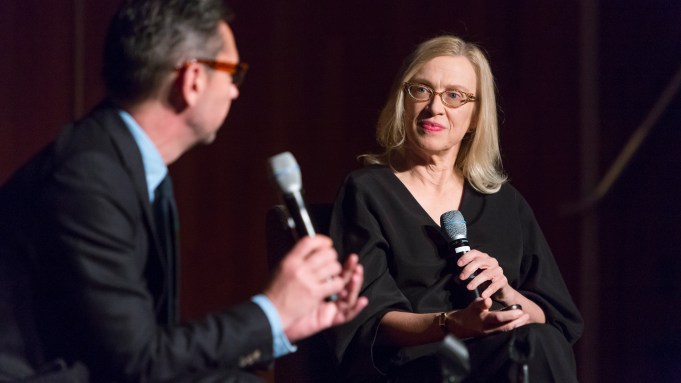 Who was Élisabeth, Countess Greffulhe — and why should we remember her?

That’s exactly what The Museum at FIT sought to unpack in its 16th academic symposium, “Proust’s Muse,” held on Thursday in the Fred P. Pomerantz Art and Design Center. The daylong event explored the intersection of fashion and literature, among other subjects, and served as an accompaniment to the museum’s current exhibition, “Proust’s Muse: the Countess Greffulhe,” which opened in September.

Supported by the Couture Council and the Coby Foundation, Thursday’s symposium featured a dozen speakers, including Dr. Joyce F. Brown, FIT’s president; Laurent Cotta, head of graphic arts at Palais Galliera; Laure Hillerin, author of “La comtesse Greffulhe: L’ombre des Guermantes,” a biography of the Countess; Susan Hiner, a professor of French and Francophone studies at Vassar, and Philippe Thiébaut, the curator of patrimony with the Musée d’Orsay.

Valerie Steele, FIT’s museum director and chief curator, discussed her curation of the exhibition on the Countess, who served as a muse for Marcel Proust and was the inspiration behind the glamorous Oriane, Duchesse de Guermantes character in his 1913 novel, “In Search of Lost Time.” “I felt that for Americans, it would be necessary to introduce [the Countess] via Proust. Proust had, in a sense, immortalized her,” Steele said.

Joined onstage by Cotta, who helped to install FIT’s exhibition, the two painted an in-depth picture of the Countess in an hourlong conversation. Born in 1860, Countess Greffulhe was beautiful but poor, so her parents arranged for her to marry Henri, Count Greffulhe, in 1881. “He was extremely rich, but as it turned out, also a philistine, jealous and unfaithful — a very unsatisfactory husband,” Steele said. (A lousy husband who supported her financially, that is.)

Celebrated for her “aristocratic and artistic elegance” and her “distinguished but often eccentric” sense of style, according to Steele, what ultimately set apart Countess Greffulhe’s interest in beautiful clothing was a genuine desire to stand out from the crowd.

“She started to work with the designers to create these very striking clothes,” Steele said. “The press said that she preferred to look bizarre rather than banal. She didn’t want to look like anyone else. Were her dresses made for her or by her? They always had to be different than anyone else’s….She was a fashion icon, but not a trendsetter, because no one could really copy her.”

“Those dresses are extremely expensive, and she was extremely daring in her choices…it was something completely close to her personality,” Cotta said. “She had to look absolutely unique.” (As the story goes, in 1904, the Countess wore one of her most exquisite pieces — the “Byzantine” dress, a gold taffeta, tulle and lamé gown trimmed with fur from the House of Worth — to her daughter Elaine’s wedding, completely outshining the bride.)

Another thing that set apart the Countess was her fascination with the arts and sciences: she was known to stage her own photographs, she was a supporter of the Ballets Russes and she raised significant funding for the scientist Marie Curie, helping to finance the creation of the Institute of Radium, founded in 1909.

“Proust’s Muse, The Countess Greffulhe,” which runs until Jan. 7, is the first of several French fashion exhibitions to be held at The Museum at FIT. Next up is “Paris Refashioned, 1957-1968,” curated by Colleen Hill; followed by “Paris, Capital of Fashion,” curated by Steele.