While most of the fashion flock will burn calories running from show to show, health clubs around town are offering a number of fresh fitness options for those who want a more hard-core experience.

In a city where exercise is something of a... 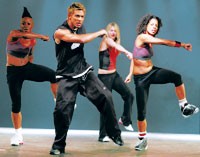 While most of the fashion flock will burn calories running from show to show, health clubs around town are offering a number of fresh fitness options for those who want a more hard-core experience.

In a city where exercise is something of a religion, gyms in New York have become mini department stores for fitness and well-being. Lavish spa treatments, cafes pushing ginseng drinks and well-stocked boutiques selling fashion-forward apparel and accessories are as common as treadmills in many health clubs around town.

One of Manhattan’s chicest new spots is Aerospace High Performance Fitness Center, a machine-free club located in the Meatpacking District. Aerospace has a sleek, minimal decor and offers classes in boxing and strength training and relies on the jump rope instead of the treadmill to help members get their cardio workouts. Although Aerospace doesn’t officially open until Valentine’s Day, the center is already holding classes and accepting members. “Our goal is to let people know that there is more to fitness than picking up weights over your head,” said co-founder Michael Olajide Jr.

Equinox, which has 17 clubs in the New York area, has started a program designed to help calculate body age, which is often radically different from chronological age. Designed in partnership with Polar, the fitness assessment measures blood pressure, body weight, flexibility and other factors; Equinox trainers will then develop a customized plan to help clients shed years. Equinox  now operates a high-end exclusive gym called E at the new Time Warner Center, where membership is by invitation only. Only six people work out at a time in the lavish setting.

David Barton, a fixture of the downtown scene since the Eighties, opened his new, heavily stylized health club in Chelsea at the end of 2004 in the former McBurney Y space. The gym offers classes with cheeky names like “Assolutely Abulous,” “Willpower and Grace” and “Pain and Pleasure.” Despite the amusing monikers, Barton’s workouts are designed to deliver serious results by focusing on strength training and core fitness.

“These classes get away from gimmicks,” said Barton, whose opening party drew a large fashion crowd, including Richie Rich of Heatherette and Patricia Field. “I think if you want to act like you are stripping on a pole, than you may as well get paid for it.”

“People are moving away from yoga and dance is making a comeback,” said Crunch group fitness director Donna Cyrus. “Cardio activities are coming back, and people want to have fun while they are doing them.”

Other new Crunch classes include Bombay Dreams, an Indian dance class, and sessions designed to simulate action sports like skateboarding and speed slating.

Meanwhile, the 14th Street Y has a new class called Punk Jump Rope that is quickly becoming a favorite of trendsetters around town. Participants burn megacalories by jumping rope to the sounds of punk music from the Ramones, Green Day and the Clash.

Tips From the Pros