FIT’s Graduating Seniors Strut Their Stuff on the Runway 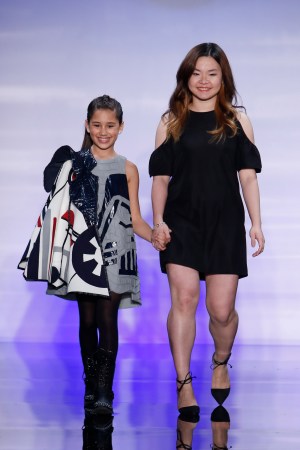 The runway was chock-full of highly innovative and well-constructed garments from day to nighttime ranging from boudoir ensembles, baby-doll bodysuits and lace and black chiffon jumpsuits to a brown/white trimmed patent leather coat and snakeskin bustier gown with tulle skirt and organza drape.

Naturally, the children on the runway — a few dressed in a “moto” jacket or vest, white neoprene cape and green fur bomber jacket — stole the show with their determined struts down the catwalk. Two carried lunch boxes with Prince and David Bowie images.

Calvin Klein Inc., together with the Calvin Klein Family Foundation, was the presenting sponsor of the runway show.

“I always love the lingerie,” said Calvin Klein, who was seated across the runway from Francisco Costa. “It was done extraordinarily well. It was a pleasure to be a part of it.”

“I love emerging talent,” said Basso, who served as a judge and will be honored by FIT Monday night at their annual awards gala. “To see the creativity, to see the knitted garments, where the students knitted each and every piece, they are couture pieces. That’s the part that’s so exciting to see. You know you will see them in the future.”

Bendet, chief executive officer and creative director of Alice + Olivia, also served as a judge. “It was great. The kids were adorable. I walked through their projects and gave them pointers on fit. It was my first time judging it,” she said before the show.

“I thought there was a lot of talent there, and there were a lot of great ideas. They were expressing the current fashion mood,” said Tahari.

Leeds, too, was impressed with the level of talent. “I thought it was creative, colorful and quite different, obviously there’s enormous amount of talent at FIT,” he said.

Meantime, Downing, senior vice president and fashion director of Neiman Marcus, can literally picture these clothes in his stores. “I thought the show was fantastic. There’s an understanding and relevance of what fashion means today. You can see those clothes hanging at retail or walking down the runway. It’s a testament to FIT and the education they give them. The students’ love of craft continues and kudos to their instructors.”

Thirty of the looks will be displayed at Neiman Marcus’ Garden State Plaza store for eight days, beginning May 14.