Palazzo Morando is hosting a tribute to the late Italian fashion editor Anna Piaggi through Nov. 30. 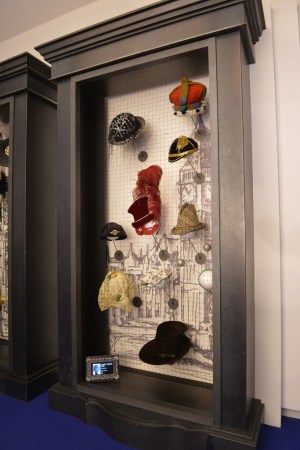 On Via Bagutta, a dark, narrow Milanese street tucked safely away from traffic, visitors will find an unexpected splash of color at the side entrance to Palazzo Morando, which is hosting a tribute to the late Italian fashion editor Anna Piaggi through Nov. 30. “Hat-ology: Anna Piaggi and Her Hats,” is a look inside the world of this flamboyant doyenne of the fashion industry.

Piaggi, a translator and journalist who died in 2012, also created elaborate fashion editorial spreads. She wore many hats, literally and figuratively: She never stepped out without a headpiece.

“She loved the hats first and then dressed herself, that was the process of her everyday life,” noted her longtime friend, milliner Stephen Jones, who curated the exhibition. An opening party took place during Milan Fashion Week, and all was well until the theft in early October of a stiletto shoe-hat designed by photographer — and one-time milliner — Bill Cunningham.

“Bill and Anna were very close and it’s a loss to the collection and for the public to see it. However, Anna would want it to be worn fabulously and not stuck in a museum,” said Jones, who praised the way the show captured the imagination of the Milanese. Piaggi’s nephew Stefano Piaggi, president of the newly founded Anna Piaggi Cultural Association, said an exhibition catalog and related book are in the works. He estimated that more than 3,000 people had already visited “Hat-ology.”

Curious tourists continue to visit the editor’s imaginary home, where a red Olivetti typewriter and surfboard topped with a frilly violet beach hat share office space with all sorts of chapeaux draped on bookcases and chairs. Disco balls spin overhead in the blue-carpeted press room, with the sounds of photographers’ flashes and clicks animating a wall plastered with images of Piaggi attending fashion events through the decades. Piano music wafts through the bedroom, where berets, bonnets and caps with feathers, sequins and veils rest on Louis Vuitton trunks.

Throughout, humorous depictions of Piaggi—including one of her swirling inside a fake washing machine—lend a surreal, carnivallike atmosphere.

That all this is hidden from Milan’s major thoroughfares is only fitting: Piaggi liked to keep people guessing.