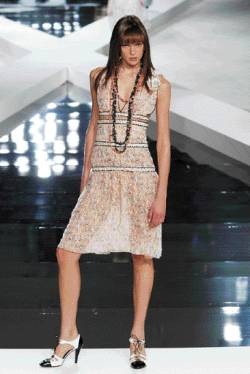 Talk about tiny skirts. Karl Lagerfeld’s jewel of a Chanel collection had some of the most minuscule in Paris. Meanwhile, Valentino’s rich, sensual clothes had a military theme.

Chanel: That Karl Lagerfeld’s a sly one. In a preview Sunday, he posed the supposedly rhetorical query, “It’s all about sportif, no?” Karl, you trickster. You know perfectly well it’s not all about sportif, even if Mademoiselle herself did champion the mood oh-so-long ago. Really, it’s all about Chanel, and your genius for keeping it forever young and vibrant without sending the madame set into a spiraling depression. It’s about that delicate circus act you perform with mastery again and again.The spring collection Lagerfeld showed Tuesday provided just the right case study. It opened with a parade of legs as models in the tiniest little skirts negotiated Lagerfeld’s geometric runway. Out they came, one after another, in flounces, skorts and slips, the black-and-white palette touched with pink as fresh as the blue Parisian sky. But what to wear with those micro lovelies? Need you ask? Jackets, jackets and more jackets, each its own little jewel. They came festooned in pearls, trimmed with crystal-encrusted braiding or simple strands of thread, or in paper-thin pink leather edged in black lace. They were spectacular, as flirtatious and girly as it gets, especially dripping with pearls, chains and cartoon Coco charms. Yet rest assured that a simple substitution — bye-bye minipouf, hello classic pencil or pleats — will keep a smile on mama’s face. As for when sportif turns serious, how about a sturdy neoprene jacket that heralds “Chanel” in glittering letters on the back?Lagerfeld, of course, seldom feels bound by a theme, and felt free to pepper his runway with spiffy nauticals, pretty black dresses, a delicate, jewel-flecked twinset. Then there were some peculiar plaid chiffon caftan affairs and oops! palazzo pants too huge to make the transition to real life, although they sometimes came with gentle blouses in a delightful flower-power print. And Lagerfeld worked overt homage to Coco in those pictorial coins that dangled from belts and necklaces, as well as in utterly charming wispy sweaters knitted with Coco silhouettes. For evening, Lagerfeld came up with a great idea: embellished dresses that, from afar, looked like slips, but which were actually bras worn with matching ultrahigh-waisted skirts — divine.Still, for his finale, the designer returned to the beach, where his models strutted his divine swimwear while flaunting the house’s new leisure accoutrements — Chanel kites, a surfboard, a dinghy. Because it’s all about chic sportif, no?Valentino: “No war. Just War-Hol,” Valentino’s show notes decreed. Against an image of the artist’s graphic “Camouflage,” Valentino showed a spring collection full of the kind of sexy clothes that — while hardly designed with concealment in mind — offer his aficionados the haute discretion their high-flying lives require. After all, for his ladies, fitting in means standing out — without ever going too far. The mood was carefree and casual, balancing pared-down streetwear — silk jogging pants — with the whimsical — an ivory chiffon top with crystal beading.In keeping with his militaristic theme, Valentino sent out jackets and shirred vests cropped short to reveal just a sliver of skin, and slit pencil skirts with star-studded patch pockets, all in a range of khaki, army green, black and cream. Of course, come spring, the miniskirt should become something of a uniform for fashionable women everywhere. And Valentino showed plenty, including a sexy car-wash style made from chiffon strips and a chiffon minidress done in a soft cameo print. Not only Warhol, but Willem de Kooning also provided spring’s artistic inspiration. His swirling designs gave rise to Valentino’s own, as a meandering red and yellow made its way across his chiffon dress and flyaway gown.But Valentino also indulged in a serious game of peekaboo, cutting around miniature portholes to let a bit of skin show through. The technique gave cashmere coats and jackets a jolt and made for a very sexy pièce de résistance among the glittering fare of Valentino’s rousing finale: a siren gown held by three strategically placed brass rings. Now, that’s modern art.