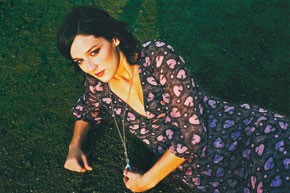 LOS ANGELES?— Meiko Sheppard is hoping to leave her days of waiting tables behind her. Since emerging on the music scene here in June with her self-released debut album, the folk-pop singer has been making waves on the Web, and there’s a possible record deal in the works. “I’ve been a waitress all my life, it seems,” she says, “but now I want the world to hear my music.” Here, she wears Kelly Nishimoto’s silk dress with Ippolita bangles, Maren & Ruby rings and Jimmy Choo sandals.

Cocktail waitress to rising star might sound like an idealized stereotype of a career trajectory. But it describes exactly the ascent of singer-songwriter Meiko (pronounced Mee-ko) Sheppard, whose rise happened virtually overnight — via cyberspace.

Like so many musicians these days, Meiko, who goes by only her first name professionally, used MySpace to get her self-released debut album, “Meiko,” heard and amass a fan base. “I feel like I’m part of an Internet revolution because my music is reaching 14-year-olds in Nebraska,” she says. She also keeps her 17,644 fans updated on her life by blogging regularly on the site (where you’ll find her comments about the photo shoot for this story). “I have nightmares that my MySpace page gets deleted,” she says.

But MySpace isn’t the only venue that has proven helpful to her career. The Roberta, Ga., native also has Hollywood’s The Hotel Café to credit. Two years ago, soon after quitting her job waiting tables at an Indian restaurant, she booked her first show at The Hotel Café with the help of a music-industry friend who introduced her to their sound man. She fell in love with the restaurant/music venue and thought it would be a great place to work. “I begged them for any kind of job.” She has been working there ever since while slowly booking better show slots. “I would see good shows every time I worked. It was a good balance of loving the music and working my butt off,” she says. This is where music supervisors from the TV show “Grey’s Anatomy” spotted Meiko during one of her sets and featured her songs “Reasons to Love You,” on the Sept. 27 season premiere, and “Hawaii,” on the Oct. 18 episode. The former reality TV junkie had never seen “Grey’s Anatomy” until her songs were on the show, but now, she says, “I’m addicted to it.”

Given her recent success, it’s no surprise that she has put her job on hold, and who knows whether she’ll return to it? Her manager, Mike Savage, maintains that several recording labels are jockeying to sign her. “It’s really cool meeting with the little guys and big guys and hearing different points of view,” says Meiko, 25. “There are so many different paths I could take.”

Currently, Meiko’s album is available through Amazon.com; CDBaby.com, where it’s among the top sellers, and iTunes, which featured her as an Indie Spotlight artist in October, and charted her with the number-one folk album for five weeks. Her songs “Reasons to Love You” and “Hawaii” were the number-one folk songs for two weeks each.

In addition, the album is carried by California independent music chain Amoeba Music, which this month chose her as its Home Grown Independent Artist, giving her prominent in-store positioning while featuring her in their print ads. At her shows, she sold more than 3,000 CDs at 30 performances in just two months. In January she will play at the Sundance Film Festival, as she did last year, this time at Star Bar. And come spring, she’ll tour the country as a featured performer on the fourth annual The Hotel Café Tour 2008.

Until she signs on the dotted line with a record label, Meiko will continue doing what she does best, charming audiences with her sweet, dreamy pop and pretty, hard-to-pinpoint looks. “I’m a mutt,” she jokes, a blend of Japanese, Scottish, Irish and German ancestry (but her manager describes her as a quarter Japanese and three-quarters Southern belle).

When it comes to fashion, “I’m not too crazy into huge designers, but I have my own thing going on,” Meiko says. “It’s comfortable.” That translates into a typical off-stage wardrobe big on lacy slips layered over tanks worn with scarves, kitschy jewelry and flip-flops. It’s a look that can veer toward hippie, and one that her sister, L.A. designer Kelly Nishimoto — who uses her maternal grandmother’s last name — advises her to tone down onstage. “My sister has played a big part in my being aware of not to go out looking crazy,” Meiko says. “She’s taught me about what to put together and what not to put together,” resulting in a no-fuss performing look pairing imitation diamond studs with a dress. When she’s not wearing one of her sister’s frocks, she goes for designers who also favor girly fare, including Tracy Reese and Ella Moss. And whenever possible, Meiko likes to break out something new. “It makes a girl feel good to have a new dress. I feel like it gives me extra confidence onstage,” she says. “I like pieces I can dress up but also dress down for my everyday life.” As for footwear, the choice is simple — and pragmatic. “I wear flats,” she says. “Sometimes I get nervous [onstage] and I don’t like the thought of shaking in my heels.”