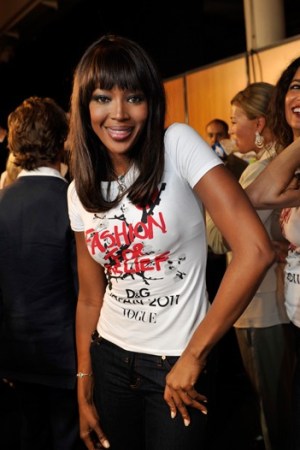 CANNES, France — Leave it to Naomi Campbell to pull off a Cannes red-carpet moment to rival the mythic steps at the Palais des Festivals.

“Dolce & Gabbana did the T-shirts for the show in two days,” marveled Campbell. “I felt, like everybody else watching television, that I have to help (Japan). When the cameras go away, people do forget.”

Backstage at the venue, the city’s traditional outdoor Forville market, Dawson confessed to jitters. “I’m surrounded by models who all know how to sashay and just because I love RuPaul’s ‘Drag Race’ does not mean that I’m going to know what to do when I get up there – stress, stress, stress,” she laughed.

Auermann said she found it amusing to “come out of the hotel and hear everyone screaming, expecting, actually, a Hollywood star.”

“This February will be my 84th birthday and it will be my 70th year in show business, and believe it or not, I’ve never ever been in a catwalk show,” mused British TV presenter Bruce Forsyth, who later hammed it up on the runway. “With a walk like mine you don’t have to practice. It’s a natural comedy extravaganza of its own.”

Roberto Cavalli popped backstage to check out the action. “Honestly I never leave my boat during the Cannes Film Festival because there are too many crowds, all the parties look the same. I came here because it’s for Japan,” said the designer, who had donated four gowns.

Knuts, whose outfits included an ocean blue Fendi dress, noted she stars in the opening scene of her artist boyfriend Nicolas Provost’s feature film that will premiere at the Venice biennale. “I have a tiny part,” she demurred.

Japanese model Tao Okamoto, who did a traditional Japanese bow for photographers, said that she is working on a number of fundraising events for her country, including a flea market planned with a number of fashion folk for May 29 in New York. “Naomi gave me an autographed T-shirt to sell,” she said.

Fonda, who made the show’s final exit, got a standing ovation as she swept down the runway in a Marchesa gown.

Across town, meanwhile, Chopard had transported Paris’ “Crazy Horse” cabaret act to Cannes to entertain guests at its glitzy annual “Happy Diamonds Are A Girl’s Best Friend” party. Guests including Bar Refaeli, Uma Thurman and Laetitia Casta wandered through an artsy presentation of Chopard’s latest Red Carpet Collection baubles and pretty floral displays to reach the party at the Martinez hotel. A sparkling affair, the cabaret’s sparsely dressed dance troupe was also kitted out in diamonds.