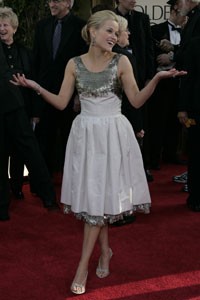 A film’s box office revenues can often be a good indicator of which one will pick up the coveted Academy Award for best picture. Think “Titanic,” “Gladiator” and “Lord of the Rings: Return of the King.” Can the same be said for the actors and actresses who are nominated? “The Oscars are supposed to represent the best of the best in talent,” said Brandon Gray, founder, president and publisher of Burbank, Calif.-based Box Office Mojo. “Though many viewers have not seen these actors’ films, these are all movies that have a consistent vision and a great story to tell.” Here, WWD ranks those best actress and best supporting actress nominees by their films’ domestic box office revenues. The talent pool, who will be hitting the red carpet this Sunday at the 78th Annual Academy Awards, is impressive: Of the 10 here, three nominees have already won an Oscar, while one other has been nominated in the past.

1. REESE WITHERSPOON, “Walk the Line”
Gross domestic revenues to date: $117.5 million; Release date: Nov. 18
If anyone is riding Oscar buzz, it’s Witherspoon. The hardworking actress, who commands around $15 million per film (one of the highest in Hollywood), has already raked in countless kudos this year for her role as June Carter Cash in “Walk the Line,” and she’s now considered the front-runner in the best actress category, following her wins at the Golden Globe and Screen Actors Guild Awards. Watchers will anxiously await her gown pick, especially after the drama at the Golden Globes, where she chose a Chanel dress that had been worn by Kirsten Dunst a few years earlier. The 29-year-old mother of two is next set to produce and star in “Penelope,” which also stars Christina Ricci, Peter Dinklage and Catherine O’Hara.

2. KEIRA KNIGHTLEY, “Pride & Prejudice”
Revenues: $38.4 million; Release date: Nov. 11
Jane Austen would have been proud. Knightley, 20, has been nominated for her role as the headstrong Miss Elizabeth Bennett in Austen’s classic tale, “Pride & Prejudice.” Knightley hails from a family of talent. In fact: Her father is an actor and her mother is a playwright. She’s the third youngest woman to be nominated for best actress. For the Golden Globes, Knightley donned a white Valentino gown paired with vintage Cartier earrings.

3. CHARLIZE THERON, “North Country”
Revenues: $18.3 million; Release date: Oct. 21
Born in 1975 in South Africa, Theron’s own personal history might be as fascinating as the roles she has chosen on the screen. When Theron was just 15, her mother shot and killed her father in self-defense after he attacked her in their home. Theron emerged as a budding actress in the U.S. with roles in the late Nineties in films such as: “Mighty Joe Young” and “Cider House Rules.” In 2003, Theron won several awards for her role in “Monster” — including an Oscar. Her fashion tastes have closely been followed over the years — very few times has she missed on the red carpet. Her black Armani Privé dress at this year’s Screen Actors Guild Awards was another winner for the 30-year-old star.

4. DAME JUDI DENCH, “Mrs. Henderson Presents”
Revenues: $7.1 million; Release date: Dec. 9
“Judi Dench brings instant gravitas to any film, she is such a strong presence on screen,” said Gray. “She brings a fiery intelligence to each character she portrays, so it’s never a surprise when she’s bestowed with a nomination.” Already a supporting actress Oscar winner for “Shakespeare in Love,” Dench, 71, received a nod this year for her role as Laura Henderson, a World War II-era British widow who staged a nude revue in London’s West End. Dench’s appearances on the red carpet fall into the classy and sophisticated categories. At past red-carpet events, Dench has appeared in dresses by Bombay-based designers Sandeep Khosla and Abu Jani.

5. FELICITY HUFFMAN, “Transamerica”
Revenues: $4.8 million; Release date: Dec. 2
Though Huffman is considered a long shot to win the statuette this year, her portrayal of a man on the verge of becoming a woman in “Transamerica” has proved she is no longer just a desperate housewife. To prepare herself for the challenging role, Huffman attended conventions of transgendered people and took voice lessons. For the Golden Globes, Huffman wore a white Grecian goddess-style gown from Marchesa.

1. MICHELLE WILLIAMS, “Brokeback Mountain”
Revenues: $75.4 million; Release date: Dec. 9
“Though Rachel Weisz is considered to be the front-runner for this category, Michelle Williams really made the most of her role — in terms of the caliber of these performances, ” said Gray. The “Dawson’s Creek” alum has successfully crossed over from the small screen to the silver screen. Prior to this nomination, Williams earned nods from both the Screen Actors Guild for her role in “The Station Agent,” and was nominated at the BAFTA Awards this year for the Orange Rising Star, which honors up-and-coming actors from around the world. Williams, who attended the Golden Globes in Givenchy Couture, currently lives in Brooklyn with Heath Ledger (her co-star in Brokeback Mountain) and their newborn daughter.

2. RACHEL WEISZ, “The Constant Gardener”
Revenues: $33.6 million; Release date: Aug. 31
More viewers might have seen “Brokeback Mountain,” but Weisz has been sweeping up all the awards this season for her role as human-rights activist Tessa Quayle in “The Constant Gardener.” The Londoner got her start while in school at Cambridge University; she has since appeared in films from “The Mummy” and “The Mummy Returns” to “About a Boy.” Weisz is engaged to director Darren Aronofsky; they are expecting a child in May. Her fashion choices on the red carpet this season have been restricted as a result. She opted for a blue Empire-waisted Rochas gown at the SAG Awards in February and a gold strapless Donna Karan gown at the Golden Globes.

3. CATHERINE KEENER, “Capote”
Revenues: $23.4 million; Release date: Sept. 30
The year 2005 was an interesting one for Keener. Not only did she dazzle the Academy with her performance as Harper Lee in “Capote,” she showed off her versatility with a strong role in last fall’s hit comedy, “The 40-Year-Old Virgin.” This is her second Oscar nomination: She also received a nod for best supporting actress in 1999’s “Being John Malkovich.” Keener attended this year’s SAG Awards in a colorful dress from Oscar de la Renta.

4. FRANCES MCDORMAND, “North Country”
Revenues: $18.3 million; Release date: Oct. 21
McDormand struck a chord with moviegoers in the critically-acclaimed “Fargo” in 1996 — she won the best actress Oscar for her performance as Marge Gunderson in that film. Her talent reaches across to the stage, as well: She was nominated for a Tony Award for her role in “A Streetcar Named Desire” in 1998. This Sunday, McDormand — along with several other attendees — is expected to arrive at the ceremony in a low-emission Toyota or Lexus hybrid. The 2006 “Red Carpet, Green Cars” event promotes environmentally friendly hybrids together with Global Green USA to recognize smart climate solutions for a healthier environment.

5. AMY ADAMS, “Junebug”
Revenues: $2.7 million; Release date: Aug. 3
Before “Junebug,” actress Adams was probably most remembered as Leonardo DiCaprio’s naive fiancee in “Catch Me If You Can.” But it is her portrayal of a young, pregnant and wise North Carolinian in this minuscule indie that has earned her an Oscar nomination. Adams made an impression with red-carpet watchers when she attended the Academy Nominees Luncheon at the Beverly Hilton in a red J. Mendel dress. She will be starring in the upcoming films, “Talladega Nights: The Ballad of Ricky Bobby” with Will Ferrell, and “Enchanted,” with Susan Sarandon and Patrick Dempsey.