New York has long been a favorite melting pot for adventurers around the country and around the globe, and it’s no different in fashion. Newcomers, both on and off the official 7th on Sixth schedule, come from all corners of the world. Here, a... 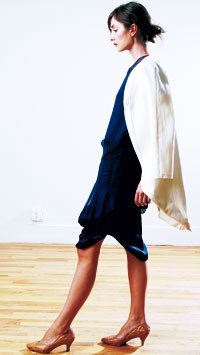 New York has long been a favorite melting pot for adventurers around the country and around the globe, and it’s no different in fashion. Newcomers, both on and off the official 7th on Sixth schedule, come from all corners of the world. Here, a look at some New York’s imports.

Ecco Domani winner and Los Angeles native Shokrian, 31, is a grad of the School of the Art Institute of Chicago. Her first collection in 2002 sold immediately to Maxfield in L.A. Since then, she’s been steadily building a fan base that includes Barneys New York, L.A. boutique Mameg, Hejfina in Chicago and Ginza Komatsu in Japan. Considering her list of idols includes Rei Kawakubo and Martin Margiela, it’s not surprising that the designer doesn’t want to make “just another pencil skirt.” Shokrian uses her fine art background to create sculptural silhouettes that still manage to be subtle and elegant.

Designer Jane MacMillan, from South West Scotland, is known for her signature printed draped chiffon dresses. “My clothes are feminine but quite individual, and for modern women,” she says. “I look to the 1920s and 1930s eras contrasted with architectural lines. I like the hard with the soft.” Look for Thirties black-and-white Silver Screen glamour, including a black section with embroidered black fabrics, a silver section with Lurex metallic and jersey and bright plain chiffon pieces.

The foursome behind the label — John Whitledge, Jeff Halmos, Sam Shipley and Josia Lamberto-Egan (all 25, except Lamberto-Egan, 27) — each did tours at boarding schools and started their collection as a men’s line out of Whitledge’s dorm room at Claremont-Kenna College. Now, the Orange County, Calif.-based label has expanded to include women’s, and has already been picked up by Barneys New York. “It’s not so much preppy as it is classic,” Whitledge says. “We’re drawing upon styles that won’t ever be out of fashion.” For fall, this means “Pompous and penniless,” he adds. The collection is themed around an old New England family whose fortune is in decline. Expect corduroy pants, tops, outerwear and cashmere pieces.

Born in Iran, Afshin Feiz grew up in London and Vancouver and studied in America. The Paris-based designer is emblematic of that 21st century conceit: globalism. “I’m all over the place,” the 35-year-old designer says. “I’m not from any one country.” He did a short stint apprenticing for John Galliano, and after three years as assistant designer at Nina Ricci, Feiz started his eponymous line with partner Thierry Gillet, who handles finance. “Stylewise, I don’t want to make too many references,” he says of his fall collection, “but it’s sort of a return to the older aesthetic of being very well dressed in the Yves Saint Laurent spirit, but younger like Chloé, so I situate myself between the two.”

The six designers showing in this group presentation — Marie Saint Pierre, Izzy Camilleri, Joeffer Caoc, Paul Hardy, David Dixon and Cincyn — all hail from Canada. While their philosophies vary, they have one thing in common: fur, fur, fur. As the group show is presented by the North American Fur Association, one can expect different types of skins to make it down the runway.

Toronto native Jeremy Laing, 25, worked in London for two years, freelancing for Alexander McQueen, after getting his degree in fashion design from Ryerson University in 2002. He is now back in Canada, based in his hometown. His sensibility leans toward the dark and artsy, and he cites Edwardian dandies and Proust when discussing his show. Despite his inspiration of Edwardian children’s wear as well as dandyism for fall, Laing explains that his collection will not be “too preciously historical.” Other elements at play: deconstruction, military-inspired details and gender ambiguity.