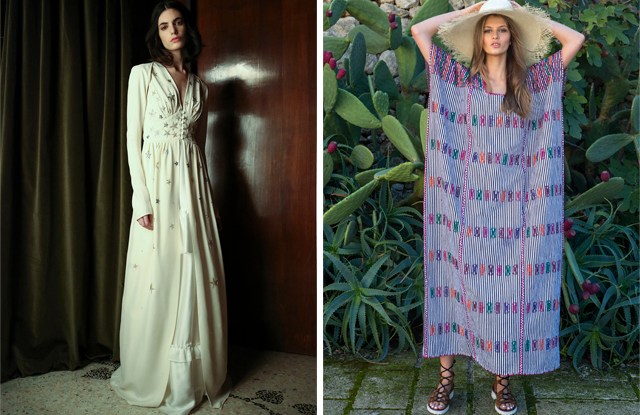 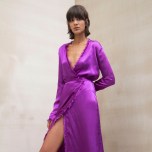 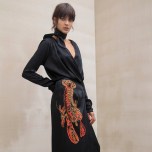 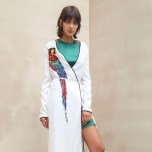 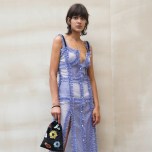 LONDON — Three fashion labels created by women who’ve cut their teeth in the industry working as fashion editors, writers and consultants, are gaining traction via retail and social media after launching earlier this year.

Among them are the British resortwear brand Pippa Holt Kaftans, created by Pippa Holt, a former editor at Sunday Times Style and British Vogue; and Attico, the brainchild of Giorgia Tordini and Gilda Ambrosio. Ambrosio is a Milan street style favorite and a contributor to Grazia Italia.

The New York-based label La Ligne, created by Vogue’s Meredith Melling and Valerie Boster with Rag & Bone’s former head of business development Molly Howard, has also gained a reputation for its modern take on the Breton stripe and its straight-to-consumer business model.

All three offer lines that focus on one specific style or product instead of offering full ready-to-wear collections. Pippa Holt’s namesake label revolves around embroidered caftans, while Attico is known for its contemporary interpretation of boudoir-inspired items, such as robes.

Holt, who has a fashion design degree and more than 20 years’ experience at Vogue Australia, British Vogue and Sunday Times Styles, said she drew on her past as a stylist to create the label’s first look book. It caught the attention of buyers and friends in the industry.

“Moda Operandi said, ‘You have to do line sheets and a look book.’ I thought to myself ‘Gosh, I don’t even know what a line sheet is, but I can do a look book.’ That’s something that my background at Vogue allowed me to very quickly produce. I cast my model, booked my photographer and we went off to Puglia and did a shoot,” said Holt. “I think that’s what made the brand get it into the marketplace, because people loved the images.”

The caftans stand out for their bright colors and vivid embroidered patterns; they are created from a naturally dyed cotton thread that is woven into cloth by hand, by artisans in Mexico.

The complicated production process, which can take from three weeks to a month, means that each item is a one-off. It is numbered to reflect that. Holt said craftsmanship is an integral part of her label’s identity and she plans to continue working exclusively with artisans in Mexico, even though it limits her scale of production.

“A lot of people ask why I don’t go to Portugal or India and make hundreds of the caftans, but that’s kind of like copying my own designs. I love the weavers and I want to help the local community, so I’m focusing on getting more weaving groups within the area, in order to produce more while keeping the business small,” she said.

“They are very oversized, big statement pieces — especially the three-panel ones. But if you understand them and don’t want figure-hugging tight things then they’re great,” she said.

The label is currently stocked on Moda Operandi, Net-a-porter, Matches Fashion, as well as the newly opened Boutique 1 on London’s Sloane Street and Style.com.

As the label grows, the designer said she aims to manage her production to cater to her current retail partners and also launch e-commerce to service her growing base of customers directly. A children’s line is in the works.

“I’m also working on selling some of the pieces direct to my customers. That’s what I’m going to launch by the end of the year because I get a lot of women coming to me directly with requests. I’m building my production so I have my own stock to sell.”

Holt is not the only British fashion editor capitalizing on their contacts, history and eye for style. Caroline Issa, publisher of the indie magazine Tank, has been producing seasonal collections with Nordstrom since 2014. The American, London-based stylist Kim Hersov, who has worked as the Telegraph’s editor at large and writes a column for Net-a-porter’s weekly digital magazine, launched Talitha, known for its bohemian caftans, fringed capes and embroidered blouses.

In Milan, Ambrosio has been drawing on her popularity on social platforms and experience at Grazia Italia. A style maven, she shares her fashion and lifestyle musings on the magazine’s social platforms.

“It’s interesting, because by being part of the street style scene I experienced the other side, the one that usually designers rarely get to see. I understood another way to communicate a product and how quickly it can arrive to people,” said Ambrosio.

Ambrosio has teamed with Giorgia Tordini, a creative consultant and designer, to build Attico around “a precise aesthetic, in which women could recognize themselves by wearing garments which are not determined around a season.”

The label — the name means attic, or penthouse, in Italian — is known for mixing decadent, boudoir-inspired elements with a more contemporary aesthetic.

One of its signatures includes a re-interpretation of classic peignoir robes for the day, which have been reworked into wrap dresses or long jackets that can be thrown over jeans. The fabrics, which are mostly sourced in Italy, include velvets, lamés and light crepes enriched with metallic embroidery.

Both the wrap dresses and the jackets have had robust sell-throughs with retailers such as Stylebop.com and Net-a-porter. Ambrosio and Tordini said they plan to focus on growing their retail network and developing their web site both in terms of e-commerce and as a platform to reinforce their brand identity.

“We are expanding the range of products for our spring collection and slowly building the world of Attico. We want Attico to become a lifestyle brand and theattico.com to be a platform for that world; not just a portal for purchasing our products, but a gateway into the world of Attico.”

For spring, they have updated their signature wrap dresses with tropical-inspired embroidery and have gone on to introduce a wider range of separates such as crochet cardigans and satin blouses and accessories that embrace the brand’s signature boudoir theme in the form of embroidered mules and soft satin pouches.

For their part, former Vogue staffers Melling and Boster decided to focus on a singular aesthetic with the launch of the contemporary label La Ligne.

Every piece by La Ligne is a reinterpretation of the classic Breton stripe. The collections range from classics, such as striped sweatshirts and tailored pants with side stripes, to more fashion-forward ones such as off-the-shoulder tops with oversized sleeves, and slipdresses.

“While Valerie and I were at Vogue, it became clear that stripes were a proven staple, no matter the season. With La Ligne, our goal is to become synonymous with the stripe and continuously explore its possibilities. It was important to us that the collection was built around investment pieces, offering items that were timeless and could be worn from season to season. Nothing from our spring collection is over $550, with most pieces under $300,” said Melling.

The brand has adopted a straight-to-consumer approach selling through its own web site, with Net-a-porter as its only wholesale partner.

“Selling directly to consumers via LaLigneNYC.com allows us to completely own the entire customer experience: product, service and most importantly our relationship with shoppers. Through this model, we’re also able to adapt quickly and not necessarily adhere to a strict fashion calendar. We can introduce products when consumers are desiring them most,” Howard said.

Lisa Aiken, Net’s retail fashion director, pointed to storytelling and the labels’ strong visual identities as among the reasons for their quick success.

“They knew what they wanted to communicate from the beginning and were very aware of their imagery, and how they wanted something to be styled. Additionally, they have a very concise and clear vision of the dialog they wanted to have with their customer,” said Aiken. “They stick to what they do best, and are incredibly focused, which is a huge benefit in today’s very saturated market.”