Under the three-year deal, renewable for another three years, the first... 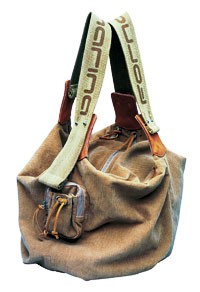 Under the three-year deal, renewable for another three years, the first collection is slated to bow for fall. The line was introduced at the World Shoe Association trade exhibition in Las Vegas that began Saturday.

After successfully diversifying from footwear into clothing, Lino Fornari, owner of the Fornarina brand, is planning further development of these new business areas. While a selection of handbags coordinating with the clothing collections previously existed, Fornari decided it was time to create a complete line of handbags and small leather goods under license.

“With its know-how and history, Principe is the best partner to guarantee success in this business,” Fornari said in a joint interview with Elio Maroni, owner and chief executive officer of Principe, at the Fornarina showroom here.

“I’m not interested in simply diluting or over-expanding the brand,” Fornari said. “But this new venture meets a specific market request, which demands extreme specialization. That’s why we need a highly specialized partner who has our same objectives.”

Through the license, the company expects sales in three years of 20 million to 25 million euros, or $26 million to $32.5 million at current exchange rates. The line will wholesale between $15 to $30 at an entry level and between $25 and $75 for the more detailed models.

Principe set up a dedicated structure in the U.S. in January to oversee service and deliveries there. The company, based in Varese, about an hour northwest of Milan, is known for its artisanal, high-end luggage and suitcases. In the past it has worked with Dunhill and Diesel under license, and still holds a license with Cerruti and maintains a collaboration with Dupont.

“Consumers are shifting toward a younger segment of the market,” said Maroni. “Our goal is to be dynamic and to react quickly to the market’s requests.”

With this new division, Fornari said he wants to create “long-lasting handbags that will be identified with the brand.” Most of the products will either feature the brand’s crown logo or its graphic lettering.

For fall, the bags are mainly deconstructed and soft. Materials range from mock fur and checkered fabric to denim and corduroy. The design team also splashed stylized prints and embroidered flowers on some of the 120 models.

Fornarina is also forging ahead with its retail strategy. The company plans to open a store in New York in 2006, its third in the U.S., two stores in Brazil this month and 20 stores in China within a year. The company lists 34 brand stores and 39 in-store shops, contributing to about 4,000 total points of sale.