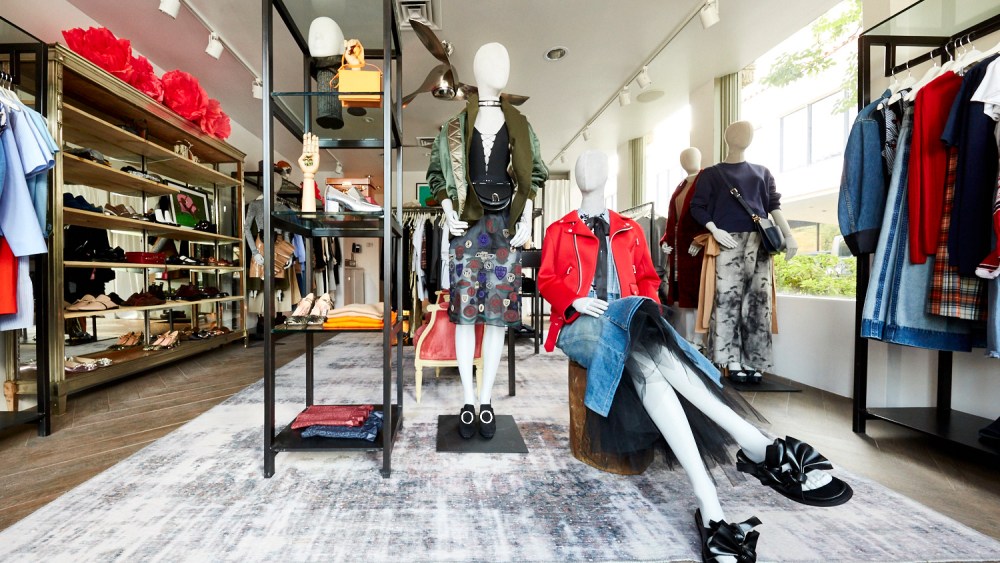 When Dallas boutique Forty Five Ten hired former editor Taylor Tomasi Hill as the store’s vice president, creative and fashion director earlier this year, it got behind her in a big way. Roughly six months after Tomasi Hill’s hire, Forty Five Ten has opened a new concept shop branded with her initials and merchandised to reflect her vision for how a younger customer shops. TTH Forty Five Ten opened last week in the former Five & Ten store in Dallas’ Highland Park Village, where neighboring retailers include Céline, Balenciaga, Rag & Bone and Hermès, among other luxury outposts.

“We found our customer was no longer interested in labels like ‘designer’ and ‘contemporary’ or trends in general,” said Brian Bolke, Forty Five Ten’s president and cofounder. “They simply want new. They want different. Forty Five Ten TTH was conceived as a laboratory, an incubator for discovery.”

Tomasi Hill said her goal is to open Forty Five Ten up to a younger audience without alienating its core customer. “On average, she’s a 45-year-old working or stay-at-home mom,” said Tomasi Hill. “This woman in Dallas is looking for easy-to-grab pieces to incorporate into her daily uniform. She’s also fashion-savvy and interested in emerging talent.”

Joining Forty Five Ten was a homecoming for Tomasi Hill, who grew up in Dallas, but spent her fashion career in New York, working as a fashion editor at W magazine, Teen Vogue and Marie Claire before departing the editorial world for retail in 2011 as creative director at Moda Operandi. After leaving Moda in 2013, she briefly operated a floral design company called TTH Blooms. Along the way, Tomasi Hill built a considerable profile as a social media and street-style star, her signature red hair and eclectic style early bait for the surge of street-style photographers nearly a decade ago. Her personal Instagram account has 121,000 followers.

Asked if Tomasi Hill’s social media/street style profile impacted the concept and highly personal branding of TTH, Bolke said, “Of course. She’s known for her instinct and sense of mixing styles and designers.” The local customers recognize her, too. Said Bolke, “She is literally the local girl that made it big ‘story’ and now she’s back. She’s authentically Dallas.”

For Tomasi’s part, returning to Dallas after more than a decade in New York was truly contingent on Forty Five Ten. “In 2008, I married my high school sweetheart and at that time we were discussing the possibility of moving back to Dallas,” she said. I told my mother-in-law the only way I would move back to Dallas was if I could open Forty Five Twelve and cater to the daughter of the Forty Five Ten client.” She planned to pitch the concept to Bolke but decided to remain in New York. “Cut to seven years later, I am opening TTH Forty Five Ten,” said Tomasi Hill.

In addition to the stand-alone store, the TTH concept will be part of Forty Five Ten’s new four-floor 37,000-square-foot behemoth opening in November on Main Street in Downtown Dallas, as well as a Forty Five Ten River Oaks in Houston opening in October.

Such major expansions are the result of the Headington Companies’ investement in Forty Five Ten in 2014. In addition to the new stores, the brand has been staffing up, bringing on Nick Wooster as men’s creative and fashion director in May, as well as Cindy Schwartz, who joined as vice president and sales director from Saks Fifth Avenue and Barneys New York; and Katherine Greenberg, vice president of merchandising, who spent 25 years at Neiman Marcus.