The City of Light glows this season as optimism returns to Paris and new and improved trade shows are ushered in. 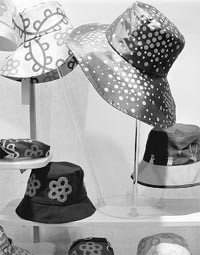 s the economy improves and travel increases after suffering the dual effects of SARS and the war in Iraq earlier this year, French trade show organizers forecast a brighter outlook for the upcoming season.

They hope to capitalize on the upswing by honing their events with sharper merchandising by price point and age group, improving the quality level of their exhibitors and beautifying their trend forums.

“We’re beginning to feel confident for the future,” said Jean-Pierre Mocho, president of the Prêt à Porter show, which will convene at the Porte de Versailles venue Jan. 23-26. “Still, we’re not at euphoria levels. We need to stimulate buyers by improving our product.”

Mocho said the show would alter the approach to accessories, following the departure of Premiere Classe. Instead of showing accessories in a single section, they will now be featured according to style and age group, within each separate forum.

“The market has become transversal in its approach to retailing,” said Mocho. “We want to reflect that in the show. We are also striving for a niche approach. Retailing has become niche. Our forums will be more clearly segmented according to age and lifestyle.”

The Prêt has undergone a stark makeover in the past few years since Mocho and his management team took over the once-moribund event. This season, he said, improvements will continue.

“We’ll have a bigger fashion show that will really show the buyers what’s hot for the season,” Mocho said.

The show will also continue to polish its aesthetic with new signage and larger alleys.

Mocho said the Prêt is angling to attract more Americans. Traditionally, American buyers visit the spate of smaller trade events coinciding with the ready-to-wear runway shows in March and October.

But Mocho believes that there are more buyers willing to come to Paris in January and September, when the Prêt convenes. To wit: He said he is exploring the idea of staging a “mini” Prêt in the U.S.

“Americans who come to France need to know what they are coming for,” he said. “If we do a smaller show in the U.S., they’ll see that we’re worth the trip.”

Meanwhile, the Porte de Versailles will welcome several shows during the same period as the Prêt: Bijorhca, the jewelry show; SIL and Interfiliere; young fashion forum Who’s Next, and Premiere Classe.

Who’s Next organizers Xavier Clergerie and Bertrand Foache, who also oversee Premiere Classe, said that the accessories show would remain similar to its prior incarnation within the Prêt.

Meanwhile, Foache said that the second edition of Premiere Classe, which convenes March 5-8 in the tents at the Tuileries Gardens, would continue to upgrade the level of exhibitors. “We’re moving more and more toward the high end,” he said.

At SIL, managing director Chantal Malingrey said about 50 new brands would be shown, including six American brands appearing for the first time at the fair, such as DKNY. “We want to continue to be the international must for lingerie,” she said.

This season will also mark a new emphasis on legwear and masculine underwear, two product categories that Malingrey said “are booming.”

“We’ve been upgrading the show in a variety of ways,” she continued. “The fashion show, for instance, will be top rate. It will be as prestigious as a full-blown show at the Carrousel.”

SIL will host parties every night during the event in order to “make the visitors feel welcome,” said Malingrey. “We are improving our welcoming services in a variety of ways and we are expanding our VIP service for important buyers.”

“There are more couture houses visiting the show and lace and frills have become very fashionable,” she said.

“We have package deals for people coming from overseas,” he said. “We are also concentrating on giving a maximum of trend information in our trend forum.”

“Having Expofil at the same time and same place as Premiere Vision makes us both more attractive,” said Daniel Faure, PV president. “It completes our offer.”

Faure said that exhibitors at PV will now also be able to visit Expofil to place orders for the yarns they use in their fabrics. “The name of the game, in this very busy world, is to cut down time. We are creating a full-service venue this way.”

Faure added that PV would continue to devise ways to help buyers make their visits easier and more rapid.

Across town, at Texworld, the fair organized by Messe Frankfurt that features less expensive textiles, director Stephanie Keukert said services, such as more private suites for VIP clients to conduct business in, would be streamlined.

Gathering at the CNIT complex at La Defense, the business district just west of Paris, the fair is expected to showcase some 630 participants from countries including China, South Korea, Indonesia and India.

“We are also working very hard to bring in producers from South America this session,” she said. “Their level of product is exceptional. We want more variety at Texworld.”

Keukert explained that their overall feeling about the January show is positive. “We’ve talked informally with exhibitors recently and they report that business is picking up — especially with clients based in the U.S.”

Paris is also recognized for the smaller, yet innovative fairs that gather in the capital around the runway shows. Workshop, the designer forum run by Sarah Tenot, will meet March 5-8 at the Cercle Republican venue, on the avenue de l’Opera, as well as the Regina hotel, which will feature largely accessories. In all, the show is expected to feature some 90 vendors.

Tranoi, the fashion fair organized by Muriel Gamboa, will scale back its so-called Preview show, but it will go forward with its main feature at the Bourse de Commerce, also March 5-8.

Paris Sur Mode and Atmosphere, two additional designer fashion shows, as well as the second edition of Premiere Classe, will pitch their tents in the Tuileries Gardens on those same dates.