Bally is starting to see positive results from a turnaround being led by Marco Franchini, who took over as chairman and ceo in 2002. 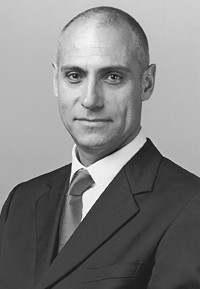 LONDON — Bally is beginning to bounce back.

Next year will mark the start of a turnaround for the Swiss-based accessories and ready-to-wear company, said Marco Franchini, who took over as chairman and chief executive of Bally in 2002. He said he has already begun to see the results of some major projects and it feels great.

“The first nine to 12 months were hard, because we were doing all of this work, and not seeing results, but that changed in the second half of 2003, and now we’re confident going forward,” Franchini said in an exclusive interview at the headquarters here of Bally’s parent, Texas Pacific Group.

Although sales for 2003 — $318.5 million, or 400 million Swiss francs — are flat against the previous year, profit margins have improved.

“We had more full-price sales, fewer markdowns and a healthier year overall,” said Franchini, who declined to give any profit figures.

He added, however, that in 2004 the company would break even “at the very least” — and may even turn a profit. The company had said in October 2002 that it expected to break even this year.

Franchini said this year’s healthier margins were also because of an improved cost base. During the past year, Bally restructured its supply chain, which is now made up of three factories. One, in Caslano, Switzerland, oversees shoe production, a small factory in Florence deals with accessories and small leather goods, while a third, in the Marches region of Italy, follows the rtw collection.

Currently, footwear generates 55 percent of sales, accessories make up 35 percent, and clothing accounts for the remaining 10 percent. “Footwear was, is, and always will be our strength,” said Franchini. He added there was double- digit growth in accessories for the fall 2003 season, while the strongest growth was in rtw.

Franchini said he was pleased with Bally’s current design team, headed by design directors Luca Ragonese and Melissa Maish, who replaced former creative director Scott Fellows at the end of 2002 after his three-year contract expired. Fellows tried to rejuvenate Bally by attracting a much younger, hipper clientele, but in the process some observers believed he alienated the brand’s traditional customers. The new nine-member design team will show its third collection in spring 2004.

“I think we’re now striking a balance between appealing both to our loyal Bally customer and to the younger, more style-conscious customer. We’re speaking to a broader base now, and further improving the brand identity,” he said.

Bally’s sales are currently split between retail and wholesale. Some 70 percent of wholesale sales comes from Asia and Japan, while the rest come from Europe and the U.S. Some 70 percent of retail sales comes from Europe, with the rest in the U.S. and Hong Kong. There are currently 115 directly operated Bally stores, and 104 franchises around the world.

In the coming year, Bally will continue to roll out new stores and refurbish and expand existing units. In the second half of 2003, the company opened two freestanding stores in Tokyo — in Ginza and Roppongi — one store in central Hong Kong and one 5,400-square-foot unit in Munich.

In 2004, the company will open units in Sydney, Shanghai, Seoul and Taiwan, and refurbish and expand another Hong Kong unit in Pacific Place. In addition, Bally plans to open six additional shops-in-shops in Japanese department stores.

Franchini said Bally’s new, in-store concept has been changed slightly and his team has managed to bring down cost levels. “That means that we can confidently go ahead and refurbish our older stores.”

The company also plans to sign its first eyewear license early next year, with the goal of having the collection in stores for the spring 2005 season.

But life isn’t all rosy for Franchini, who is very concerned about the weak dollar and the strong euro. “I see it as a worrying element. I was just in Florence and what I witnessed was totally depressing. There were no Americans. Businesses are crying,” said Franchini.

“Because of the strong euro, we may be forced to lower our prices and reduce our margins — which is a dramatic choice —and one we haven’t made yet. I’m curious to see what the other companies are going to do,” he said.

Franchini — who joined Gucci in 1994, serving first as European retail director and then as general manager for Europe — also weighed in on rumors surrounding his old boss, Domenico De Sole.

Press reports in Europe have said De Sole may head to Bally once he leaves Gucci next year. “TPG [Bally’s parent] is a private equity investment fund, and they are going to look to exit Bally sooner or later. Who knows what will happen? I would love to work for De Sole again,” he said.

Sources inside Gucci, however, deny that De Sole is interested in taking over Bally.

Franchini said he is upbeat about the long-term future of Bally, which has had a checkered history since TPG bought it in 1999, when Bally’s sales were about $500 million. Last year, sources estimated TPG had invested $250 million in Bally’s restructuring so far.

“I think the market is going to be increasingly split into two groups,” said Franchini. “There will be the top players — Gucci, Dior, Hermès — and then there will be the more democratic luxury brands, which is where Bally has always fit in.

“What those brands have to do is increasingly deliver good value at good prices, and focus on the product itself rather than on the designer as personality. Bally tries to do all that every day.”