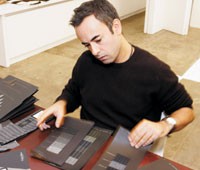 NEW YORK — Even as a young boy in the Brazilian town of Guarani, Francisco Costa was a maverick. At the age of 10, he designed an outfit to wear at a horse fair in the countryside. After sketching his masterpiece — he laughs now when he recalls the burgundy gabardine safari suit — he took it to a local tailor to have it made up. But when the burgeoning designer proudly stepped out of the family car on the day of the event, he noticed that all of his cousins were in jeans and cowboy boots. It was a horse fair, after all. They laughed at him, of course, but no matter; Costa learned then that fashion meant taking risks.

For his fall 2005 Calvin Klein collection — Costa’s fourth as creative director — he did just that: He took a chance by veering from the Calvin aesthetic not only with a Mod Sixties silhouette, but more significantly, with decorative, even flashy fabrics. “It all starts with the fabrics,” Costa says.

We took him at his word. From October to February, WWD trailed the designer as he worked through the textile development process for his fall collection to see what made it onto the runway and what ended up on the cutting room floor.

Oct. 25, 2004
It’s six weeks after the spring show, and Costa’s head is brimming with ideas for fall. First up, the pre-fall collection. It is here that initial inspirations take shape, in particular, the birth of a color palette. “You always have a starting point,” Costa says. “For spring it was Brancusi, for fall it is Sean Scully.” Scully, an Irish-born contemporary artist, is best known for his abstract color-block oils in shades of dark eggplant, washed reds and blue-grays. “For me, the way to interpret these looks is in prints or in patchwork,” says Costa. He develops several ideas in this vein. One of them, combining three different silver chantilly laces against a rose velvet ground, makes its way into pre-fall. The other, an abstract blend of men’s wear fabrics, is featured on the fall runway, most notably in a jacket that combines panels of gray pinstripe with lace.

Nov. 9 and 10, 2004
Costa and his team — Fulvio Rigoni, a design consultant; Josh Mann, designer and Luca Lometto, fabric sourcing manager — comb through hundreds of textiles. “We probably start with over 1,000 fabrics,” says Costa. Only about 30 will make it into the collection — this is just the first cut. The group makes selections, draping them over arms for careful examination. Some are rejected as “too scratchy,” “too stiff” or even “too King Kong.” Lacquered wools, though, find favor with the group. “The effect makes the wool very modern,” Costa says. The idea of origami also comes up in a notion Costa deems “very rich.”

The designer has asked two London textile designers to create a new take on tweeds. One features dark green feathers woven with black. The handmade piece is sent out for sample yardage to see how it will reproduce on a loom. “Developing fabrics is more thrilling to me than any other process,” Costa says. “I just wish we had more time.”

Dec. 17, 2004
Costa takes a field trip for inspiration: Antiktex and Transatlantic, two vintage fabric resources in Manhattan, and Amarcord, a vintage shop in his favorite new stomping ground, Williamsburg, Brooklyn. At Antiktex, he asks to see different takes on paisley. (“Calvin just returned from India with the most inspiring and amazing fabrics,” he says.) He leaves with a pastiche of ideas for fall and beyond: dyed raffia cloths from Zaire, colorful Middle Eastern embroideries from the Fifties, intricate 18th-century Chinese embroideries and late-19th-century Japanese stencils, originally used to print kimonos. Such finds, Costa says, could spark a sudden shift in the current collection or be used later for print, pattern, color and trimmings inspiration.

While at Transatlantic, which Costa first discovered when he worked at Bill Blass in the early Nineties, he spots a variety of small, tonal jacquards on slightly chintzed grounds. “I love the sensibility here,” he says. “It offers the perfect all-American balance to the things we saw at Antiktex.” After a quick coffee at Italian pastry shop Fabiane’s, it’s on to Amarcord, where he gravitates to a tote made of vintage fabric. He ultimately translates its combination of tweed and patent leather into a funnel-neck hooded coat for the runway. Other vintage finds include a gray ski sweater with red and black stripes — he calls it a “great idea for resort” — and a logo-splashed, patent leather clutch from Pierre Cardin.

Jan. 28, 2005
Less than two weeks to show time, and rolls of fabric fresh from production are scattered throughout the studio. Only now, Costa explains, can he make informed final choices. “You fall in love with an idea, and then the fabric comes back from development and it’s too dull or too heavy,” he says. “It’s difficult sometimes to make all these different ideas work on the runway.” One of the biggest disappointments: the feathered tweed. Its couture-like panache was lost when mass produced. At $650 a meter it could be construed as a blunder, but, says Costa, “You have to be willing to try something new.”

Feb. 10, 2005
Show day. The first looks down the catwalk feature grid patterns: a skinny coat made up of shirred mink squares and a short black skirt of wool squares against voile with patent leather sequins. “Scully’s work was the beginning point, and this is how the look evolved,” Costa will explain the day after the show. The origami idea also shows up throughout, as cummerbund-like accents and as trim on a billowy black Empire dress. Men’s wear fabrics are worked together like a puzzle on shapely jackets, and one short, pleated skirt with herringbone panels is layered onto tulle and finished with sequins. In place of the original patchwork lace, a grid-patterned lace shows up on a long evening dress.

And the feathers? “Well, everything is an exercise,” the designer notes. But the thought didn’t go entirely to waste: One of the last looks down the runway is a strapless dress made of ink-blue feathers.