"I still feel in debt with Florence and everything this city and its region have brought to us," Pinault said, accepting the Fiorino d'Oro award.

FLORENCE — François-Henri Pinault, Kering chairman and chief executive officer, was honored on Tuesday with the Fiorino d’Oro, a high-profile award conferred by the Municipality of Florence to international personalities who have distinguished themselves and contributed to social and cultural development.

On the first day of international men’s trade show Pitti Uomo, inside the frescoed Elements Room of Palazzo Vecchio, home to the city’s municipality, Pinault was handed the honor, a coin and a certificate, by the city’s mayor Dario Nardella, who praised the entrepreneur’s daring attitude.

“Pinault is not only one of the most successful entrepreneurs in the world, but also and above all a courageous and visionary entrepreneur who genuinely loves to take risks always in the spirit of promoting creativity and sustainability,” Nardella said.

“I still feel in debt with Florence and everything this city and its region have brought to us,” Pinault said, describing the city as Gucci’s “beating heart for almost a century” and home to the storied porcelain company Richard Ginori, founded in 1735 and also controlled by Kering.

“Florence is a land of plenty. Plenty of talented creative and business professionals. Plenty of preserved savoir-faire,” continued Pinault. “Eventually, Florence is where reputations are sealed,” he added, noting Brioni in 1952 staged the first men’s runway show ever organized globally at Florence’s Palazzo Pitti. As reported, the men’s tailoring label under the Kering umbrella is returning to the city to mark its 75th anniversary with a presentation at Palazzo Gerini.

“Florence is a land of beauty. Some even say that the countless artistic wonders of Florence can make you sick, and that Frenchmen are prone to this syndrome,” Pinault said to general amusement. “I feel good so far, and I look forward to contributing through my group to the future developments of this amazing city,” he concluded.

According to tradition, the ceremony was accompanied by four clarion players and a representative of the municipality raising a banner that bears the city’s signature red fleur-de-lis against a white backdrop.

“This French group, the most influential luxury group worldwide, has effectively believed in Italy for over 20 years, playing a growing and fundamental role in terms of investments in our country, but especially in Florence and Tuscany,” the mayor added. 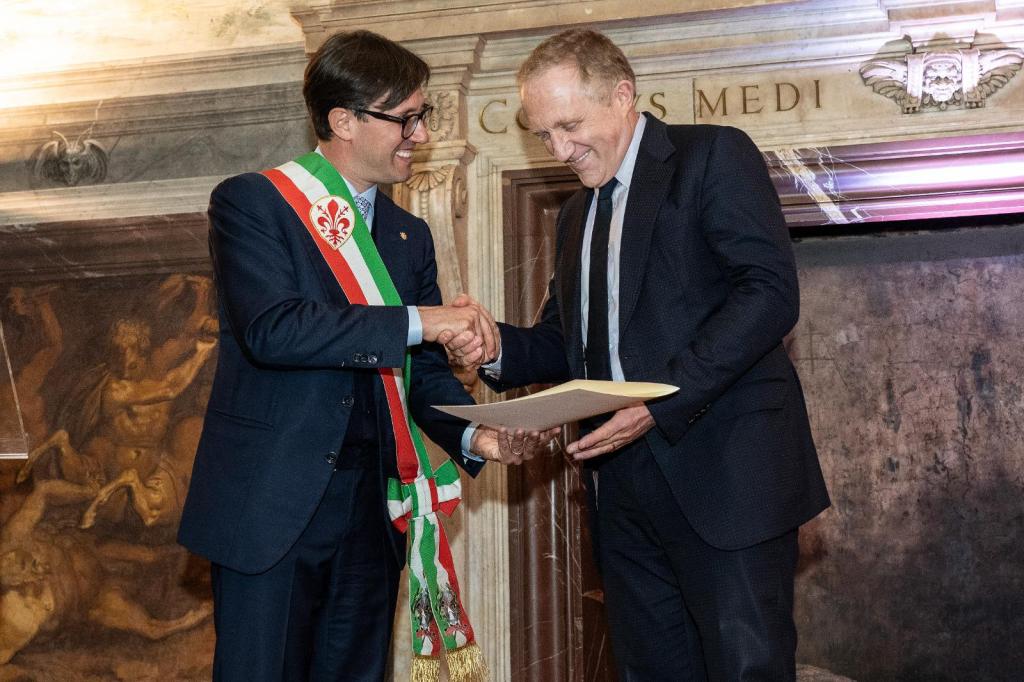 To wit, Kering’s star brand Gucci, which in the first half last year accounted for more than 60 percent of the group’s revenues, and for 82 percent of its operating profit, was founded in Florence in 1921.

In 2018, Pinault was drawn to the region for the ribbon-cutting of Gucci’s ArtLab 400,000-square-foot industrial complex in Scandicci, outside Florence. At the time of the christening, Pinault emphasized the importance of Tuscany and Italy for Kering, noting that Italians themselves are often not aware of the significance of their country’s pipeline and quality craftsmanship.

Signaling an ongoing commitment to the area, as reported Kering is also negotiating the lease of a building in Scandicci for its Saint Laurent brand, according to a note issued by the Italian town’s municipality. Nardella confirmed the investment during the award ceremony.

“Kering has strong values and it has always expressed and cultivated a deep sense of respect for heritage…savoir-faire and Made in Italy, which represent the deep cultural and economic ties between France and our country,” the Florence mayor noted, adding “great investments have no flag.”

“Pinault is also an entrepreneur who firmly thinks that a business must look beyond mere financial and economic performances, aiming at higher purposes to protect and improve the well-being of people and of the planet,” he underscored. Citing the official reasons for the award, Nardella praised the Kering-led Fashion Pact for gaining traction among international companies, including Italian businesses.

Former recipients of the award from the fashion world included the late designer Karl Lagerfeld in 2016 and then-International Herald Tribune fashion editor Suzy Menkes in 2013.