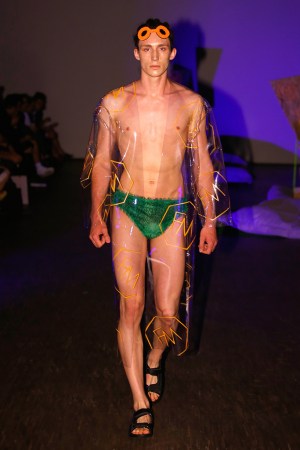 One only needed to glance around the audience at Franziska Michael’s show at Mercedes-Benz Fashion Week Berlin to realize that the young local designer has found favor with her contemporaries, many of whom were decked out in her flamboyant clubbing gear. Noting that for spring she drew inspiration from “the Nineties film ‘Hackers’ and all the other techno movies of that decade,” Michael translated her theme into oversize caramel-hued leather overalls for the girls, worn with white Lycra cropped tops underneath; the boys’ version was rendered in light blue denim, branded with the designer’s initials and worn over cropped sweatshirts with rolled up sleeves for a Nineties hip-hop effect.

The caramel leather HotPants, shiny Lycra leggings and mesh tunics that dominated the collection were only for the young and confident — a checklist if you will of what to wear if you want to get into Berlin’s more notorious nightclubs. Michael also showed a fun approach to detailing: Her interpretation of a back pocket was a large denim pouch sewn onto the back of a sheer orange mesh men’s jacket.