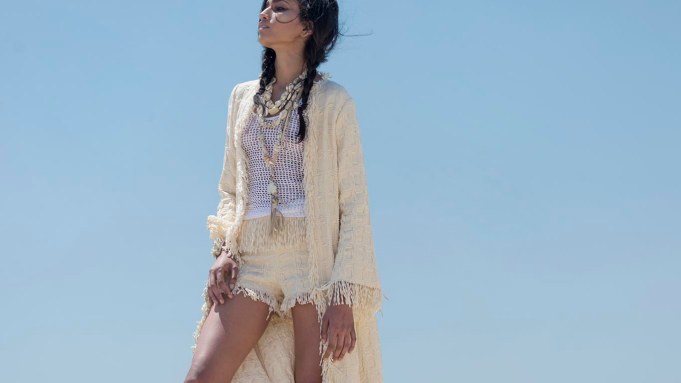 Frederick Anderson, is taking an interesting approach to launching his label. Fall 2017 was Anderson’s debut collection. Titled Black.like.me, it was a lineup of mostly black garments inspired by his identity as an African-American. Per traditional retail cycles, it will go on sale in August. But in the meantime, Anderson, who is the former co-owner and cofounder of Douglas Hannant and former president of Hanley Mellon, has whipped up a spring collection that will launch direct-to-consumer Memorial Day weekend via his web site frederickandersoncollection.com.

“This is filling the void between [the fall shows] and August,” said Anderson. “I didn’t want to stop the momentum.”

While fall was a reflection of the designer’s race, spring is based on his summer experiences in the Hamptons. It’s lighter, literally, as the entire collection was done in shades of white. Anderson throws a white party each summer. He also wove some of the region’s history, specifically the Shinnecock tribe of Native Americans who originally owned the land. Those references came through on shredded lace and fringed details on cropped tops, shorts and robes.

Regardless of Anderson’s overarching themes, the collection is perfect for summer parties in the Hamptons and beyond. His fabrics — cotton tweeds, laces and tulles — are top-notch, ultralightweight with luxurious texture and they elevate his relatively breezy dress silhouettes and separates.