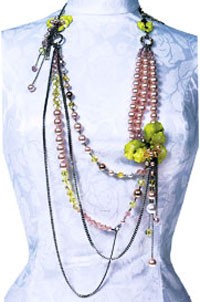 The events wrapped up a four-day run Jan. 31 at the Porte de Versailles exhibition complex.

“Our époque is about the spirit of travel,” said Dauphine de Gerphanion, accessories buyer for Paris’ Bon Marche department store.

In some cases that eclectic attitude found its way into handbags with detachable charms and jewels that add a personalized touch.

“[Women] are happy to have a bag with a charm or jewelry that looks like something they’ve collected themselves,” said Marion Bergin, assistant jewelry buyer at the U.K.’s House of Fraser department store chain.

“It’s a way for people to customize [their bags],” said Marjorie Mathieu, designer at Lollipops.

At Un Apres-Midi De Chien, designer Alain Marzat said buyers were keen on bags with ornamental touches, such as a leather bag decorated with a cluster of removable beads wholesaling for 110 euros, or $143.

“For us, it’s already a trend that’s on the shop floor,” he said, noting that he’ll be stocking up on tan-colored bags, since many high-profile brands, including Chloé, will focus on that shade in ad campaigns.

He also noted that bags in subtle shades of red and dark blue will be strong colors for fall.

De Gerphanion said necklaces that can be worn long or worn with several wrapped around the neck were among strong trends at Eclat de Mode and Premiere Classe.

“The trend started last winter and it will be strong next summer and winter,” said Zoe Cavero, owner of Clips jewelry store in Bordeaux, France, noting that strong presence of tweed jackets in fashion is bolstering the trend.

Buyers also noted that colored and ethnic pieces were popular.

Premiere Classe welcomed 16,156 visitors to its show, an increase of 23 percent on its September edition. At Eclat de Mode, attendance was up 8 percent compared with its January show to reach 11,091 visitors.

— With contributions from Tina Issac