NEW YORK — Although it’s based in Britain, French Connection is looking to make a scene on the American political front with its latest T-shirts and voting initiatives.

In collaboration with Rock the Vote, the company has designed... 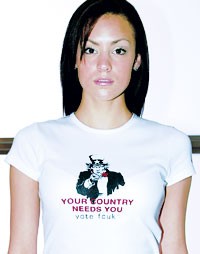 NEW YORK — Although it’s based in Britain, French Connection is looking to make a scene on the American political front with its latest T-shirts and voting initiatives.

In collaboration with Rock the Vote, the company has designed three T-shirts, one featuring Uncle Sam, one with “Aunt Sam,” a British film star, as well as — in true company fashion — a shirt bearing the racy adage “fcuk you, I’m voting.”

“We have always encouraged freedom of speech and expression and could not find a better fit than Rock the Vote and the election,” said Andrea Hyde, president of French Connection. The company will also have a voter registration drive in some of its American stores and on its Web site, fcuk.com.

French Connection is no stranger to controversy. Its notorious T-shirts bearing controversial one-liners have long been sources of dispute. In 2003, Federated Department Stores pulled FCUK logo shirts from some of its divisions after numerous consumer complaints.

Rock the Vote, a nonprofit, nonpartisan organization founded more than a decade ago by members of the recording industry, strives to foster civic responsibility in young voters. The French Connection T-shirts, which retail for $34, will bow at the upcoming Democratic National Convention in Boston. They will be handed out to delegates at both national conventions and will be sold at French Connection stores and through its Web site. Additionally, the Rock the Vote Bus Tour, which targets concerts and college campuses, will be branded with the “Vote FCUK” logo.

DKNY Jeans has also collaborated with Rock the Vote on a series of logo T-shirts containing messages such as “Vote. It’s important” and “You decide.” The shirts go on sale today at department stores nationwide, for a $26 suggested retail price. A DKNY Jeans spokeswoman said the brand, which is produced under license by Liz Claiborne Inc., would donate $5 for each shirt sold to the nonpartisan Rock the Vote group.

The shirts will be featured in a series of public service ads breaking in September issues of such titles as Entertainment Weekly, Elle, Teen People, Spin, Vibe, Fader and Details, which like WWD, is owned by Fairchild Publications, a division of Advance Magazine Publishers.

— With contributions from Scott Malone