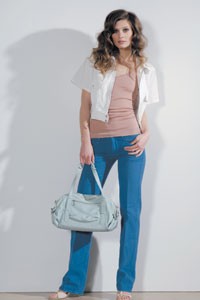 PARIS — Despite major hurdles, French sportswear and contemporary labels are making inroads in the U.S. via department stores and flagships.

One of those brands is Gerard Darel, the Paris-based sportswear company that boasts 50 European doors. In November, Bergdorf Goodman showcased the label’s colorful selection of soft-leather handbags, dubbed the “24 Heures Drapé” (or “Draped 24 Hours,” in English), which go for $355 each. The model has been selling like wildfire in France, where it has sparked sales of 100,000 units since its launch there in 2004.

Gerard Darel accessories and ready-to-wear collections will appear in Neiman Marcus’ catalogue this summer. And the French company’s plans include a New York flagship within two years.

“Our product and brand image is very strong in Europe, so the timing is ideal to expand our business to the U.S.,” said Laurent Darel, managing director of the brand, which forecasts its 2005 consolidated sales were 125 million euros, or $147.5 million at current exchange, up 13.6 percent versus 2004.

Vanessa Bruno, the Paris-based contemporary fashion label, also has opted for the department store route in the U.S., where it is sold in Barneys New York and Saks Fifth Avenue.

“[They] are the best way to test a brand,” said Christophe Desmaison, president of CD Network, Vanessa Bruno’s U.S. distributor, who said the label’s sales there increased by about 25 percent in 2005 year-on-year.

According to him, a successful logistics system is key for labels from Europe to enter the U.S. successfully.

“European brands must learn how to respect delivery,” said Desmaison, adding Vanessa Bruno will open a New York flagship by the end of this year or early next year, bringing its total freestanding store count to four, including the 1,615-square-foot boutique it opened in Paris’ Marais neighborhood in November. “Flagships allow European labels to go at their own rhythm.”

Regardless of whether they sell their products through department stores or flagships, European brands face a weighty price challenge when exporting their products to the U.S. Although the dollar has recently gained strength against the euro, the exchange rate remains highly unfavorable for Europeans. That, compounded with hefty customs and transportation fees, means it can be up to 35 percent more expensive for European brands to sell in the U.S. compared with their home markets, according to an industry source.

“There is tough competition for good price and good value,” said Julie Gilhart, senior vice president and fashion director at Barneys New York. “Some currencies make the price of goods too expensive, and therefore it is difficult to compete.”

He added, “The key is price, delivery and product. European brands have to reorder and replenish as quickly as brands here. If that’s the case, then they will have the same brand recognition.”

With this in mind, French contemporary brand Paul & Joe has taken action.

“We have revised our prices so as to maintain the competitiveness and positioning of our products verses direct competitors,” said Jean-Michel Terrien, commercial department manager of the Paris-based brand, who has been developing Paul & Joe’s U.S. retail business in stores such as Saks Fifth Avenue, Barneys and Bergdorf’s for nearly six years.

He expects that, within two years, Paul & Joe will add a New York boutique to its 30-strong collection of flagships in Europe and Asia. The brand’s greatest rivals are Marc by Marc Jacobs, See by Chloé and Diane von Furstenberg, said Terrien.

Testing the waters in the U.S. through department stores is less risky — particularly when it comes to cost — than European brands opening flagships from the get-go. However, a few labels have chosen that strategy, including Zadig & Voltaire, the Paris-based urban sportswear label and retailer with a casual, contemporary bent. This month, the brand will enter the U.S. with a 3,700-square-foot flagship in Los Angeles.

“The first flagship will enable us to perfect logistics and diffuse the concept of the brand,” said Thierry Gillier, founder of Zadig & Voltaire. “The U.S. is a very difficult market, which you need to know how to enter and invest in appropriately in order to last.”

A second Zadig & Voltaire store, in New York’s SoHo, is planned for as early as April.

The brand, which generated sales of 250 million euros, or $295 million, in its latest fiscal year ended July 31, operates 30 stores in France. Elsewhere in Europe, it has opened doors in Geneva; Stockholm; Brussels; Antwerp, Belgium, and Madrid over the last year.

Taking another pricing tack, Gillier stressed the importance of keeping the brand’s dollar price tags on a par with that in euros. So a 189 euro pair of jeans in France goes for $189 in the U.S.

Loft Design By, a Paris-based contemporary sportswear label, also expects to enter the U.S. with its own boutique by the end of this year or early next year. It already has seven doors in France.

“A flagship will allow us to control the image of the brand,” said David-Leslie Frèche, commercial director of the label, which he said is positioned between Armani Jeans and Club Monaco.

Keeping Loft’s store architecture — loft-like, as the name suggests, with dark wood paneling and floors — is essential for the brand’s success abroad, he said.

“We haven’t ruled out wholesale,” continued Frèche. “However, it doesn’t correspond as well with Loft’s business concept.”

In light of high rent and export costs, European brands are not earmarking huge advertising budgets for the U.S. Rather, they’re relying on celebrity connections to attract star-struck Americans. Paul & Joe, for example, has built its fashion fame by its clothes being sported by in-the-limelight celebrities such as Kirsten Dunst, Paris Hilton, Katie Holmes and Gwyneth Paltrow.

By and large, however, European fashion brands are banking on U.S. customers’ seemingly unquenchable desire for novelty.

“A new [European] brand has that advantage of being the new kid on the block, so customers tend to look at it more closely,” said Barneys’ Gilhart.