With everything from bamboo skateboards to bags made of recycled billboards, brands are increasingly taking eco messages to the streets. 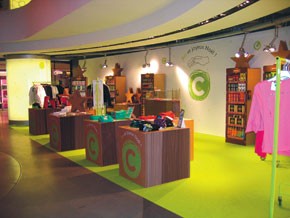 PARIS — With everything from bamboo skateboards to bags made of recycled billboards, brands are increasingly taking eco messages to the streets.

“Green labels among streetwear brands is one of the hottest trends around,” said Luc Biermé, sales director at the Who’s Next apparel show in Paris.

Not only are streetwear staples such as T-shirts and basic cotton pants easy and cost-efficient to manufacture in an eco-friendly way, but style-conscious adolescents are actively looking for apparel with a conscience, said Martin Wieczorek, head of buying for the Citadium sports store in Paris.

Brands are now touting multiple attributes — from paying fair trade prices for organic materials to recycling — rather than simply emphasizing a respectful approach to the environment, which was fashionable in the Nineties.

“What I find interesting is that brands are going further and further in their approach,” said Biermé. “They take a 360-degree strategy from the product to the marketing.”

He pointed to Manifeste, an uberhip brand sold at Colette and L’Eclaireur here, which traces where and by whom its cotton is picked and offsets the carbon emissions of its air transport with the association Co2 Solidaire, as an example. “They have pushed the concept to the limit,” he said.

Retailers, too, are tapping into youngsters’ quests for conscience-free cool.

In early November, Colette unveiled its “Green Is In” promotion featuring Katharine Hamnett and L.E.N.Y. T-shirts, whose sales go to Al Gore’s The Climate Project, while Barneys New York is promoting a green holiday season and its upcoming green campaign includes a bamboo skateboard.

Meanwhile, late last month, Citadium kicked off its first green promotion “Bio et Joyeux Noel,” or “Organic and Happy Christmas.” It showcases a selection of brands new to the store, including Nu Streetwear’s fair trade and organic jeans, T-shirts and sneakers and Moda Fusion, a brand of funky dresses and accessories made by a co-operative of former prostitutes in Brazilian shantytowns.

Citadium has quietly carried a mix of eco stalwarts like Misericordia apparel, Veja sneakers and Bilum bags made from old advertisements, together with eco subbrands such as Volcom’s V. Co-logical plus organic items from Carhartt, Element and Vans for some time.

The concept also includes the introduction of lower-energy lighting and recycling points, plus the use of recycled cardboard and nontoxic paints for merchandising, as well as advice for customers to green up their lifestyles.

“A large part of streetwear’s target client base of 15- to 25- [year-olds] is aware of and responsive to environmental and social issues,” Wieczorek said. “Every streetwear client is susceptible to this type of offer, as long as the product is authentic and the marketing is not seen as hypocritical. The surf, skate and snowboard clients are especially interested in this,” he added, pointing out surfers traditionally are particularly pollution-conscious.

Though some polls suggest environmental and social issues are not among top concerns for youngsters — a TNS Worldpanel Fashion study in August found that British people under 25 are least likely to buy ethical fashion — designers say that’s because the offer has been lacking.

“Young people tend to be very concerned about the environment and fair trade but there are very few products or streetwear brands that use organic cotton or have a fair trade policy. To me it’s a real paradox,” explained 33-year-old Maxime Guillon, who left his job managing a graphic design agency to found Paris-based Nu Streetwear in January.

Retailing at around 100 euros, or $149, for jeans, Nu Streetwear is targeting between 800,000 and 1 million euros, or $1.2 million and $1.5 million, in first-year retail sales. (All figures are converted at current exchange rates.)

“I design styles that I want to wear,” Nolan said. “I figure if I exist, there must be others.”

Formerly a designer for an Indian factory supplying British mainstream retailers, Nolan’s wake-up call came when she found out a sequined garment she created had been subcontracted to a factory using child labor.

Fable printed tops retail from 65 euros, or $97, and maxi dresses for 140 euros, or $208. They are certified fair trade and organic, and colored with nontoxic dyes.

Other designers are emerging from activewear backgrounds. Maia Andersen of Sustainable Collective by Convoy, based in California’s Orange County and making organic, reversible tops and dresses using plant colors, said her experiences designing outerwear for Oakley and Cold as Ice helped her tackle the constraints of sustainable design.

“Technical design, with performance-related design challenges, absolutely influenced my passion to pursue the creation of our brand,” she said. The collection ranges from $60 to $140 at retail.

Retailers cautioned eco-friendly status alone does not guarantee success. “Being eco is just one factor in producing a good product that the consumer will respond to,” said Wieczorek. “For the time being, it is not a critical decision factor for most clients.”

However, green appears set to become an increasingly important point of difference. “If we can propose eco-friendly [products] plus style, people will certainly choose it,” said Nadege Winter, Colette’s press officer and resident green guru.

“People are realizing that these aren’t trends that should be taken lightly,” added Biermé. “This isn’t a fashion trend, but an awakening.”

And, in Wieczorek’s view, “I think inevitably this offer will grow to the point that brands not respecting a minimum standard of environmental or social responsibility will be marginalized. So everyone will jump on board.”