Now is the time for retailers to go the distance for their customers, and Bergdorf Goodman and Lanvin certainly went the extra mile Thursday night. 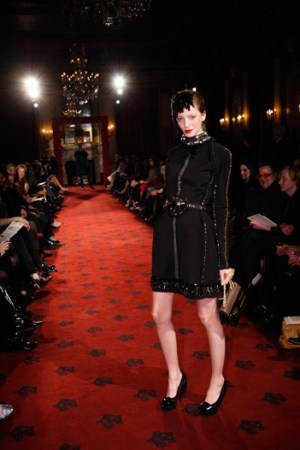 Now is the time for retailers to go the distance for their customers, and Bergdorf Goodman and Lanvin certainly went the extra mile Thursday night, turning what was essentially a trunk show into a grand Muhammad-and-the-mountain moment. As with any designer PA, the idea was to give clients a personal shopping experience. But rather than the usual in-store affair, Bergdorf brought in Lanvin’s Alber Elbaz to host a cocktail party and runway show at a private club housed in a stately white marble building on the northeast corner of 60th Street and Fifth Avenue, which, in a slightly Kubrickian twist, insisted up front that reporters not mention its name. An odd but not entirely inappropriate request; Lanvin is something of a fetish for the fashionable, after all.

This was a most proper occasion — jacket and tie required — held in a majestic room with soaring frescoed ceilings and ballroom chairs. “It feels very Parisian, doesn’t it?” said Elbaz, who was in town specifically for this event, his first of the sort with Bergdorf. “The idea was to have all of you in this beautiful room that is a little bit of Paris. But you open the window and the door and it’s New York. And it’s the best location because Bergdorf Goodman is just behind us.” With the intention of re-creating “the magic of a fashion show but in a more intimate way,” Elbaz plucked 38 runway looks, some styled with commercial pieces, as well as the rose-covered door frame from his Paris show.

If the familiar sight was redundant for the editors in attendance who saw the show in March, Elbaz didn’t mind. “It’s not for the journalists,” he said. “It’s for the clients.” The room was full of them — 100 clients and their guests — some of whom had traveled quite a way for the event. “Ruth, the personal shopper at Bergdorf, called to tell me about this,” said Nancy Gonzalez, who was in from Colombia to do double duty on Friday, when she hosted her own trunk show at Bergdorf and shopped Lanvin’s. And Elbaz did his best to make it worth Bergdorf’s best shoppers’ while, engaging them from the top of the runway with witty banter.

“We planned this event a year ago when the economy was booming. Remember that?” he queried before talking his audience through the clothes in an informative but humorous way. “All of this collection was cut on the bias,” Elbaz explained. “I ask my staff, ‘How does it feel when you wear it?’ and they say, ‘I feel that the coat is hugging me.’ I think that’s what we need in fashion.” It had the intimate ring of the presentations Elbaz holds for press and buyers during pre-collections. “It starts with fantastic, fabulous design,” said Bergdorf’s Linda Fargo. “But when you couple back with a designer who is able to connect with clients and sellers, it translates into a more dynamic and personal business. Alber brings the humanity to the business.”

While Bergdorf declined to disclose sales goals or results from the actual shopping event held in-store on Friday, it was obviously banking on Elbaz’s charming delivery. Among the best sellers were a black, stretch wool sheath with a shoulder puff, and a sleeveless stretch wool dress with a hip tuck, in beige and navy, both for $2,835. “It’s everything,” said Bergdorf president and chief executive officer Jim Gold when asked how such face time pays off. “It’s so important that people understand why these clothes are what they are, why they’re priced the way they are.” In other words, Lanvin’s not cheap, and now more than ever women need incentive to spend, a notion Elbaz acknowledged during his presentation. “Everyone is asking, ‘Do women need a 3,000 euro dress? Is it politically correct?’ ” Maybe not. But as Elbaz said, “The idea here is to bring back the pleasure of shopping.”