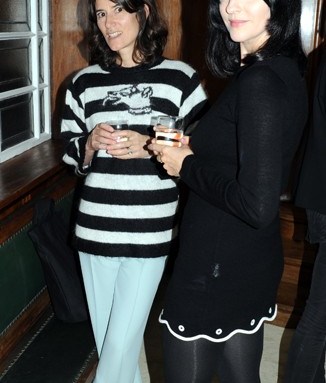 The three-minute film, made by Willem Jaspert and Stephen Langmanis, features Florrie Arnold, the musician, model and current face of Nina Ricci’s L’Elixir perfume, who lounges fetchingly in Bick and Freud’s designs. (In her day job, Arnold is more at home behind a set of drums – she said she started playing when she was still in kindergarten.)

Bick and Freud said they hadn’t told the filmmakers how to depict their designs. “Not at all – it was quite refreshing,” said Freud. “It was nice to see how they interpreted the collection,” added Bick.

Guests including Bobby Gillespie, Pam Hogg, Vidal and Ronnie Sassoon, Tiphaine and Dinos Chapman sipped pink grapefruit and vodka cocktails as they mingled in the hotel’s wood-panelled lecture theater, which served as a screening room.

“I signed books for three hours and 20 minutes today,” exclaimed Sassoon, who’d been signing copies of his autobiography at one of his hairdressing academies earlier that day. “It was really wild.”