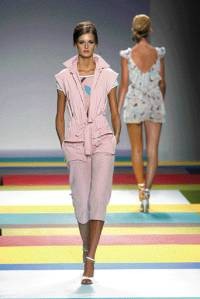 Cacharel was cute and stylish; Costume National, sexy and steamy. Meanwhile, Dries Van Noten stayed folkloric and Loewe had a touch of the gaucho.

Cacharel: Mini skirts and maxi color. That’s what Suzanne Clements and Inacio Ribeiro served up at Cacharel for spring. Since their arrival five seasons ago, the husband-and-wife design duo has gained credence with teenagers who love cute and stylish clothes. This time, their ingénues also came with a dash of sex. But by playing grown-up sensuality against teen naïveté, their version was hardly blatant in-your-face sex. Floating micro-minis, for example, were paired with oversized boyfriend sweatshirts that dangled from the shoulder, while revealing chiffon dresses looked mischievously cute in candy-colored prints. Think Brigitte Bardot cavorting in Saint Tropez. Indeed, much of the collection oozed Sixties style, with bold red or green striped sailor T-shirts and artsy prints, including graphic parasol swirls and garlands of jasmine. Although much seemed suited for some sunny fantasyland, plenty was geared to cool schoolgirls as well, from motorcycle cotton trousers and utility blousons to rougher leather separates. Clements and Ribeiro continue to make Cacharel fetching and fun.

Costume National: Ennio Capasa’s spring collection for Costume National offered a steamy vision of feminine intrigue, one that took inspiration from the silky sensuality of the boudoir and brought it out onto the boulevard. A gray satin pajama top rode off-the-shoulder and was paired with tap shorts, while corset tops were plentiful, including many that stretched south like the stays on a teddy. Some of the best pieces, however, were Capasa’s hook-and-eye trenchcoats, belted tight and worn with nothing underneath, of course.

The designer took classically sexy silhouettes and snipped a bit here and a bit there until they were even sexier. A pink satin miniskirt, for instance, was cut out around the hips to look as if it were riding low over a garter belt. If Capasa’s hot-to-trot look overheated at times — and it did — we can only imagine that those minis won’t be cut quite so mini when they’re shipped to stores.

Dries Van Noten: Dries Van Noten has chosen a very specific look, and he sticks to it singlemindedly, taking his folksy ethnic fashion a couple of degrees to the North, the East or West each season, without ever really leaving the vicinity. Of course, that means, as the merry-go-round of trends spins, sometimes his look is spot on, and sometimes it’s not even close.

Last season, Van Noten’s sophisticated, intricate folk collection looked just right. This season, though he showed plenty of sunny and pretty pieces, including loose gauzy camisoles paired with embroidered circle skirts, as a whole the collection didn’t pack the same wallop. Show notes claimed influences that ranged from punk rock to the Fifties, but it all looked like classic Van Noten instead. Hopefully, that’s just what his customers are looking for.

Loewe: Playing on the house’s Spanish heritage, as Narciso Rodriguez did before him, Jose Enrique Ona Selfa brought a hint of gaucho swagger to Loewe this season. His brief 23-look show included a clever leather dress perforated with buttonholes from which jaunty leather flounces were hung and others cut in both leather and suede with sporty racer backs. Flat copper buttons decorated some looks, running down the ankles of cream leather pants and studding an A-line skirt.

The collection, Ona Selfa’s second for the house, was much more focused than his debut effort. He played it safe, showing more wearable clothes this time around. But he’s not out of the woods yet — the label still lacks a clear image and the identity of the Loewe customer has not yet been defined.