From Boardwalk to Runway

As California's southern-most urban center, San Diego may be known worldwide for its beaches, pricy real estate and laid-back attitude, but the state's second-largest and the nation's seventh-largest city by population is aiming to make its mark on...

By Marcy Medina and Rachel Brown on May 29, 2008
View Slideshow 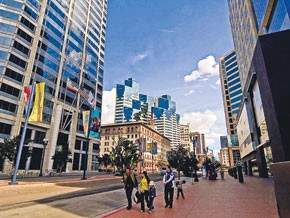 As California’s southern-most urban center, San Diego may be known worldwide for its beaches, pricy real estate and laid-back attitude, but the state’s second-largest and the nation’s seventh-largest city by population is aiming to make its mark on the international fashion scene.

The first San Diego Fashion Week, scheduled for Sept. 28 to Oct. 5, will spotlight 15 local and international designers who are doing business in New York and beyond.

This story first appeared in the May 29, 2008 issue of WWD. Subscribe Today.

Organizer Allison Andrews, a local fashion publicist, conceived the idea three years ago, and the event will finally be unveiled this fall. The venue, a 20,000-square-foot tent with a 3,000-person capacity situated on Sheridan Harbor Island, will offer visitors a panorama of the city, with views of the downtown skyline, the Coronado bridge and Point Loma.

The event will be for press, but the public will also be able to buy tickets to shows, seminars and events. Andrews estimates the press value to be worth about $600 million to the city.

“We think this event will change how people think of San Diego. Saying everybody from here is a surfer is far from the truth. There are a million natives like me who have never touched a surfboard,” she said. “I want the people living here who appreciate the finer things in life to have another outlet.

“The women who live in affluent Rancho Santa Fe are driving up to South Coast Plaza to shop when there are couture-level designers working in their backyard.”

Their wares are a far cry from the active sportswear that the city is primarily known for. ASR Expo, the world’s premier trade show for the surf, skate and snowboard industries, has called San Diego home since 1989, with a show held in the city’s waterfront convention center each year in September and January.

Drawing an estimated $40 million in business annually to the city, ASR features over 700 action sports brands, attracting some 7,000 retail buyers and other attendees. Soft goods make up about 70 percent of the mix at ASR.

“San Diego really embodies the action sports lifestyle,” said ASR show director Andy Tompkins. “From the brands and athletes that grow up in the area to the surf breaks and skate parks, it is a great host city for our show. Buyers love to check out local retailers and see what trends are happening. It really is one of the centers of action sports fashion.”

Among the apparel and retail brands with headquarters in San Diego are Charlotte Russe, Quiet Hero Clothing and Vix Swimwear; Reef, Prana and specialty retailer Sun Diego are in the neighboring town of Carlsbad, and Cardiff-by-the-Sea is home to Patagonia’s first surf store and denim retailer L.A. Fairchild, which plans a big expansion with several new doors under the new name of Jeanomix.

The city’s retail scene ranges from sizable malls to eclectic shopping destinations. The Gaslamp Quarter, loaded with restaurants and boutiques, is hopping at night with college kids. Hillcrest, San Diego’s gay neighborhood, is transforming into a trendy shopping mecca, while nearby La Jolla has long been the choice for upscale spending sprees.

And San Diego certainly has a population able and ready to support such luxury. The county’s median home price is roughly $400,000, and well-heeled enclaves such as Rancho Santa Fe, Del Mar and La Jolla rank among the highest in the nation.

But San Diego is also a hub for students. In addition to the University of California at San Diego and San Diego State University, the city boasts four fashion schools: a branch of Los Angeles’ Fashion Institute of Design and Merchandising, Art Institute of San Diego, Fashion Careers College and Mesa College.

“You have such a mix of cultures,” said Amber Delecce, vice president of Vix Swimwear. “You have La Jolla and Del Mar, which are very fashion-forward and chic. Then you’ve got your San Diego total surfer girl, very collegiate with lots of polkadots and mix and match.”

Said SDFW’s Andrews, “The whole facade of a sleepy beach town is going to fall away. The proof is already in the pudding. We are just dishing it out.”