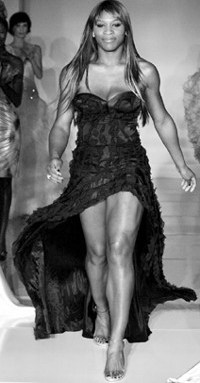 At Monday night’s WTA charity dinner at the Fairmont Miramar hotel here, Venus presented her 10-piece sportswear collection for Wilsons Leather, with which she has been collaborating since 2000, and Serena introduced 12 looks from her eveningwear line, Aneres (Serena spelled backwards).

“I’ve been working with Wilsons for a couple of years, but this is the first time I’ve done a fashion show. It was so exhilarating! Afterward, I was ready for an encore,” said the elder Williams sister after the show. After taking her runway bows with models wearing the sleek black, white and red jackets, pants and skirts, she changed into a short, asymmetrical silk minidress to walk in her sister’s show. “I only did this for Serena — otherwise, I’d be way too shy,” she said, although her graceful runway sashay indicated otherwise.

Serena’s polished debut collection featured a range of evening looks, from that sexy minidress to a chiffon pleated halter dress with a satin corset to a beaded lace gown with a full-length ostrich feather skirt. “I love the red carpet and that it’s getting so much attention right now, but eveningwear is what I truly love and adore. When I studied fashion in school, I put all my work and effort into the evening clothes,” she said.

Williams said her biggest design influences are Roberto Cavalli, Gucci, Yves Saint Laurent and Dolce & Gabbana, but she gleans inspiration from almost anything. “I rip out pictures from magazines all the time,” Serena said, “from a leather jacket to cashmere, just because I like the color.”

When she arrived at the dinner, the younger Williams donned an olive leather corset dress she said was inspired by that very jacket, and later changed into a black ruffled gown for her runway bow. “This dress makes my legs look great,” she grinned.

While she has no plans to merchandise the line just yet, she’s already at work on her next runway show, which will include eveningwear as well as sportswear. Her managing director, Davide Tomassoni, a former leather goods executive, said he’s not rushing her. “We’re not focused on money right now; we’re trying to take it step by step, but eventually we’d like to take the line into specialty stores.”

Serena claims she finds plenty of time to design while she’s on the competition circuit. “I sketch when I’m in my hotel room and I have boxes of fabric at home, so I pretty much have everything I need.”

She already has at least one fan in her sister.

“I hadn’t seen some of the looks until tonight,” said Venus. “They were awesome.”

Also look for Aneres to turn up on the backs of friends like singers Brandy and Kelly Rowland, who helped model the looks on Monday, and on Serena herself. “I have a lot of events to go to, so I’m constantly designing new dresses to wear,” she said. But by the end of the evening, she was dying to change into comfier clothes, declaring, “I’m going to go put on my Juicy.”