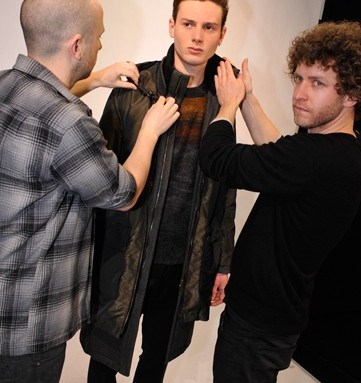 Cerruti: It’s all change at the house of Cerruti. A new creative team — women’s wear designer Richard Nicoll and men’s wear designer Jesper Borjesson — are aiming to freshen up the label. Swedish-born Borjesson, who was previously first assistant to former Cerruti creative director Jean-Paul Knott, will present his debut men’s collection for the house on Jan. 22 in Paris. For the collection, Borjesson, 34, who graduated from Central Saint Martins in 2006, said he worked a subtle aviator theme into what he defined as a new silhouette for the Cerruti man. “There is a lot of utilitarian inspiration and tailored aviator looks, such a wide collars and fitted waists,” said Borjesson, adding he plans to inject a new sophistication into the collection that goes beyond traditional tailoring. Borjesson dubs the mood of the collection “relaxed elegance.” The designer traveled to Berlin to source inspiration for his debut at the house and incorporated textured and reedited vintage Cerruti fabrics. He also worked in new volumes in tailored pieces. “He is a stronger, more confident man,” said Borjesson.

Sjaak Hullekes: Small-town boy Sjaak Hullekes is looking to bring sincerity and an untainted eye to the big city come Paris Fashion Week. Born in postage stamp-sized Zierikzee, in the north of the Netherlands, Hullekes, 29, studied at the ArtEZ Institute of the Arts in Arnhem, Netherlands, which already counts Lucas Ossendrijver and designers Viktor Horsting and Rolf Snoeren among its distinguished alumni. Hullekes launched his eponymous men’s label in January 2007, won the Mercedes-Benz Dutch Fashion Awards 2009 in November and is gearing up for his first official Paris presentation in June. However, this season, he’s offering an amuse-bouche in the form of his fall collection, which he will present until Jan. 27 in a private showroom at 48, Rue Chapon. “I am a bit of my own muse, I come from a small town, so I thought of someone who is a bit naïve but full of enthusiasm who arrives in a big city,” Hullekes explained of his collection, which boasts luxurious pieces such as silk shirts and shaved mink jackets.

Laitinen: The fashion world has a share of siblings who codesign but a brother-sister duo is the rarest of specimens among them.

Helsinki-based Tuomas and Anna Laitinen named their label simply Laitinen. The two got their start when they won a special mention at the Hyères Festival in 2006, and launched their first real collection the following year. They started with men’s and women’s, but this season will be their second with men’s only. “As a small business, we had to choose a focus, had a stronger following in men’s wear and a lot of shops ordered our men’s wear for women,” said Tuomas. “It’s kind of Spartan yet romantic. Pretty melancholic. Quite androgynous. We don’t do showpieces for the sake of doing showpieces.” Anna is in charge of the knitwear, which is central to the line, made entirely in Finland. “It’s probably the most expensive place in the world to produce it, but when you have a small label, it’s important to keep the quality as high as possible” and to have everything close at hand, Tuomas said. Their most important retailers include Isetan in Japan, Harvey Nichols in Hong Kong and Seven in New York.

Yohan Serfaty: Moroccan-born designer Yohan Serfaty studied political science in Switzerland before working for a string of French couture houses and launching his own label. He designs both men’s and women’s wear, but his sensibility is unisex. His men’s wear, heading into its fifth season, is a sophisticated range of basics, specialized in leather, which he calls a living, changing, noble medium. For fall, Serfaty designed leather jackets backed with Neoprene and assembled in structures that are rigid and soft at the same time. Longer jackets are cut in sheets of compact wool. Inside this outerwear are removable breastplates for the ultimate sense of protection.

Boris Bidjan Saberi: Incorporating elements of his German and Iranian heritage into his work is helping to put Boris Bidjan Saberi’s men’s wear label on the map. “My heritage is very much a part of my work,” said Saberi, adding the brand has registered double-digit growth since its spring 2008 debut. Indeed, the largely under-the-radar label, which is already carried in stores such as L’Eclaireur in Paris and L’Atelier in New York, is quietly becoming a household name among the avant-garde set. For fall, Saberi, who is based in Barcelona, will launch a secondary line as well as a limited edition collection dubbed 11 of 11, named after the 32-year-old designer’s lucky number. It boasts 11 different items, which will be sold in 11 select stores worldwide. Meanwhile, Saberi, who is known for his sculptural approach to design, which he enhances with innovative materials and elaborate details, will show his edgy ready-to-wear collection during Paris Fashion Week on Jan. 23.