By Rosemary Feitelberg and Lisa Lockwood on September 7, 2012
View Slideshow 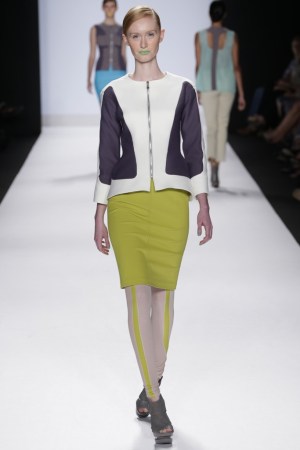 ON WITH THE SHOW: Before the lights went down at Project Runway Friday morning, Debra Messing said her foul-proof fashion fix is for her feet. “No matter how I’m feeling, I feel tall and sexy when I put on a pair of heels,” she said. The LA transplanted “Smash” actress said she is loving being in New York especially since the show draws from The Great White Way. “There has never been a show on TV that celebrates Broadway and musicals, and gives real Tony award winners the chance to show their stuff,” Messing said.

Her appearance Friday may have been a go-see of sorts, since she is keen to be a permanent Project Runway judge, according to Weinstein’s Meryl Poster. And there should be plenty of episodes to come. After posing with Jennifer Hudson, Michael Kors and Nina Garcia, Heidi Klum gave front row-er Harvey Weinstein a shout-out and said, “I have to tell you all this has been so much fun — 10 seasons — and it is not the end of it. So no rumors, keep on going.”

The photographers could not get enough of Klum in a shimmery gold, back-baring Alexandre Vauthier gown. Meanwhile, Hudson, a guest judge, turned out to already have a personal favorite, wearing a teal pantsuit from Michael Kors.