Clunky shoes have been labeled as "f--k you" fashion by some observers for their subversion of the male gaze.

By Misty White Sidell on May 2, 2018
View Slideshow 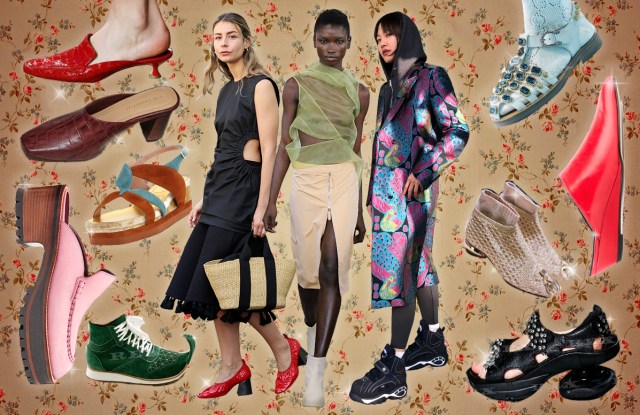 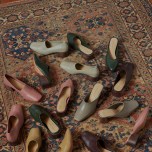 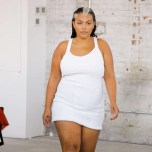 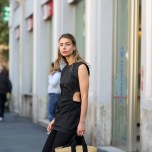 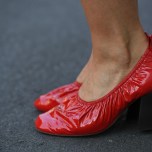 It’s become something of a New York fantasy, one that’s regularly played out on television. A young woman saunters across the Meatpacking District’s nightlife district; perched high atop little more than two pencils, she strides across a booby-trap of cobblestones — gleefully defying gravity.

The stiletto’s appeal, however, appears to be eroding amid fallout from a Trump victory and the #MeToo movement. As many broader cultural norms are being renegotiated, women’s footwear fashions have followed suit, hurtling back down to earth. Frumpy shoes — those which forsake all suggestiveness in favor of comfort and mobility — are back.

Women who partake in the trend consider clunky shoes a “f–k you” to prescribed fashion gender codes. Instead of choosing shoes that are feminine and cumbersome, they wear lug soles, clopping mules and sneakers once relegated to the elderly.

These styles have been spotted on runways, on the streets and on fashion’s third dimension, Instagram. The trend is also taking hold of stores’ bottom lines, with some retailers reporting that stilettos are now only a small portion of sales — eclipsed by flats, sneakers and small, wearable heels.

Unlike fashionable flats of the past — such as ballet-style designs — these shoes are minimally feminine, and clunky to an antifashion-type effect.

Megan Gray, a stylist who works with Brit Marling, said of the shoes’ social messaging: “It’s a way to make a very bold statement very easily. A simple ballet flat, a lot of time you see a woman wearing them for function. The decision to buy these very extreme shoes, I do think is telling people — ‘I don’t care, I’m going to wear something most people think is the ugliest thing.’”

Some fashion-forward girls are now shopping directly at orthopedic brands. Clunky Skechers have become the favored footwear of meme queen Caroline Goldfarb of the Instagram handle @OfficialSeanPenn, while Kelly Zepeda, a community representative for resale sites Grailed and Heroine, has turned to the French downhill running shoe brand Hoka.

For Zepeda, the clunky shoes are not only comfortable, but “I like how ugly they are. I’m attracted to how unconventional they are, they look like orthopedic shoes. It’s like a ‘f–k you’ and what you think fashion is. I don’t care if you think they’re ugly.’ It’s almost a rebellion against what is [considered] pretty,” she said.

Her thoughts were echoed by Alexandra Sickles, a Los Angeles-based publicist, who has taken to wearing orthopedic Reebok styles. “Every time I wear them, my boyfriend is so repulsed. I don’t dress to look sexy, but I guess the whole shoe thing, for a lack of better words, is a ‘f–k you,’ I don’t care what you think.’”

The trend was, by some accounts, sparked by the success of Balenciaga’s clunky Triple S sneaker style, as well as continued ripple effects from Phoebe Philo’s influential tenure at Céline.

In 2012, Philo sparked an ugly shoe phenomenon with a luxury styling of Birkenstocks, hers lined with fur. The design heralded a new casual wave in luxury — a message that stands today, judging from recent high-fashion interpretations of Crocs and Ugg boots, not to mention four-figure Vetements sweatpants.

Suzanne Rae, a Brooklyn-based designer whose brand is a key player in the frumpy trend, said of the movement: “I think women don’t want to be victimized by fashion trends and instead want to show that they are smart enough to make their own decisions.”

“I think it has to do with the growing sense of feminism: Intelligence, practicality and health all tie back to feminist ideals. It’s all connected and stems from the philosophy of taking care of yourself,” she added.

Of course, while they represent a dwindling portion of retailers’ sales, stilettos are still being worn by many women — who may even consider those styles empowering themselves. Some female designers, however, are rebelling against the style, saying stilettos were created by men, in the eye of the male gaze.

“I feel like we are questioning what men find sexy and what women think is sexy for themselves,” said shoe designer Mari Giudicelli, whose namesake brand of mules and boots is rooted in an earthy, frumpy aesthetic — oftentimes employing a stout wooden heel. “I think we realize we want to move around freely, be ourselves and not worry about balancing on two little sticks.”

Designer Amélie Pichard added: “In French we say ‘Être bien dans ses basket,’ meaning feel well and you will be beautiful.…Women will now begin to make choices less in the eyes of men but more in their own eyes and feelings. Heels are shoes designed by men, and those men designed a fantasy about women.”

These designers’ lines feature wider foot beds and prioritize a day-to-night comfort. “I feel like I’m taking things into consideration that [male designers] usually don’t,” claimed Giudicelli. “I’m prioritizing women. If you can’t walk all day in it, I’m not OK with it.”

Nonetheless, Zepeda considers the styles as a “repellent — it’s kind of a way to rebel against what’s expected of girls to wear and what’s conventionally considered attractive. I almost want to not be attractive.

“I would say these shoes are empowering because I am taking control of what I look like. I look the way I do because I chose to look this way and I’m not influenced by what anyone finds acceptable,” she added.

Raine Trainor, a New York-based art director who thrift shops for Nineties clunky platforms, said of the shift: “I would like to believe there is a correlation between [the #MeToo movement], wellness and women having to care less about beauty in the eye of the male gaze. We see it outside shoes, too, even with the beauty movement — it’s not taboo to not wear makeup anymore, but instead there is a push to take care of your skin instead.”

The trend is taking hold at retail, where buyers say they are looking to increase their assortment of the frumpy shoes. Moda Operandi’s vice president of nonapparel, Jodi Kaplan, attributed only 10 percent of the site’s shoe sales to stilettos, and said Moda’s trunk-show sales point to a high interest in flats and kitten heels over high-pitch styles.

Bonnie Lee, designer of the South Korean-based brand Suecomma Bonnie, said: “Chunky heels and flats provide comfort and can even be perceived as dressy. In the past, we chose the pretty shoes, even at the expense of our comfort. Nowadays, consumers do not spend money on inconveniences.”

Susanne Botschen, founder of Mytheresa.com, launched luxury shoe e-commerce site Martha Louisa last month. She said of initial sales reports: “The really high heels are not moving. I think this is just the beginning of very modern shoes, this kind of grandma vibe — it always takes time before trends arrive at a broader audience.” Botschen noted Rae’s brand, as well as Fabrizio Viti, as strong performers in the trend.

Viti confirmed that his brand’s sales indeed skew toward flats and chunky, wearable heels. He said of the trend: “Those shoes are quite ugly, they are calling them man repelling — but why not? You can have fun, but at home do something sexy that is not a shoe and is more private.”

But according to Giudicelli, the shoes’ biggest significance is their prioritization of intellect, comfort and productivity. “I feel like women are finding their voice and speaking out and talking about things that they didn’t talk about before. For many reasons, doing all that and being comfortable at the same time — it’s a plus.”