First introduced for men in 2000, the Platinum Fubu collection has served as the brand’s limited edition line since its launch. Featuring a new character for about four... 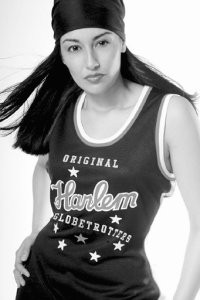 This story first appeared in the March 6, 2003 issue of WWD. Subscribe Today.

First introduced for men in 2000, the Platinum Fubu collection has served as the brand’s limited edition line since its launch. Featuring a new character for about four seasons, previous Platinum Fubu collections include jackets, tops, jerseys and pants featuring images from Bill Cosby’s famous “Fat Albert and The Junkyard Gang” and legendary boxing champ Muhammad Ali. The latest line showcases the Harlem Globetrotters and for the first time, there will be a men’s and a women’s line.

“Women started asking for their own Platinum line when we came out with the Fat Albert collection,” said Daymond John, chief executive officer of Fubu. “So we decided to do it with the Harlem Globetrotters line because of the resurgence of sports and athletic-inspired clothes.”

The Platinum Fubu Harlem Globetrotters women’s collection will be available in junior and plus sizes 4 to 24 and girls’ sizes 7 to 16. The assortment will include front-snap shooter shirts with coordinating tear-away pants, knee-length dresses, mesh jerseys and cotton baby T-shirts, all featuring original images and official logos of the Harlem Globetrotters.

Inspired by the Platinum Fubu Harlem Globetrotters men’s collection, the women’s pieces will be available in classic Globetrotter colors of blue, red, black, freesia and white.

Now a more than $400 million company, the collections are sold in over 5,000 stores throughout the U.S. and internationally in freestanding Fubu stores. The Fubu clothing lines have led the company to expand into a multimedia conglomerate, which includes FB Entertainment, the umbrella organization for the company’s ventures into movies, TV and music.