Fuentes Line Heats Up at Kohl’s

NEW YORK — Daisy Fuentes is a diehard when it comes to fashion. After a nine hour shoot of fall fashion TV spots that began at 3 a.m., it’s not the ponchos, brooches, and handbags she’s sick of. 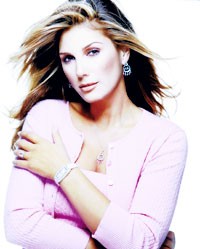 NEW YORK — Daisy Fuentes is a diehard when it comes to fashion. After a nine hour shoot of fall fashion TV spots that began at 3 a.m., it’s not the ponchos, brooches, and handbags she’s sick of.

“I don’t want to see another TV camera for at least another couple of days,” she said in a phone interview from Los Angeles.

It’s a good thing then that she’s not in the business of selling them. What she is pushing is her successful collection of apparel and now accessories, both exclusive to Kohl’s.

Designing and overseeing six new categories can seem overwhelming for even the most seasoned designer, but Fuentes, who started her career as a model and then host on MTV’s “House of Style,” is taking it in stride.

“I’m having a hard time keeping up,” she admitted, “but I’m having a good time. It’s the sort of thing I would do whether or not I was in the business of it.”

The strong sales of Fuentes apparel puts the brand in a solid position to support the accessories, said Kohl’s president Kevin Mansell, who declined to disclose specific sales figures. Typically, the mass retailer launches a myriad of categories shortly after the brand’s initial introduction to the customer.

“One of our strategies is to try to leverage what we do with brands in multiple areas. We think that’s one of the strengths we have being a department store,” he said.

Handbags, licensed by the Betesh Group, include large tote styles heavy on hardware as well as smaller shoulder bags. They will retail from $32 to $45. Small leather goods will also be offered for $16 to $22 retail.

Watches and sunglasses follow fall trends seen across the market. Licensed by E. Gluck, watches include mother-of-pearl dials and rhinestone bezels, and sunglasses, by Riviera, feature oversized lenses and colorful frames. Watches retail from $40 to $60, and sunglasses retail for $25, the highest price point carried in the department.

Costume jewelry ranges from $8 for a small pair of earrings to $28 for a more ornate necklace. Maurice Max Inc., which also is the holding company for jewelry brand Lee Angel, has the license. Fuentes is also venturing into the fine jewelry business, which is licensed to Aurafin. The collection includes a synthetic cylon sapphire and cubic zirconia vintage-inspired cocktail ring, 14-karat gold geometric linear earrings, and a white gold snake chain with synthetic cylon sapphire drops. Retail prices will start at $80 and go as high as nearly $600.

Footwear, licensed by Bennett Footwear Group, will feature styles such as sandals for $49.99 and boots for $99.99. The entire Daisy Fuentes label is managed by Regatta.

Mansell attributed the success of the Fuentes brand to differentiated products.

“From a style and fit standpoint, it clearly is different than other products we have,” he said. “It’s more contemporary, it’s more concerned about color, it’s more fitted, it’s more fashionable. And I think there’s the same gap in our assortment in all these other categories…We’re not treating any of these accessories businesses differently [than we did the apparel]. We’re not going to touch on the watch business, we’re going to make a big presence.”

Sometimes, though, all the marketing and retail support in the world can’t help a brand if the celebrity behind it doesn’t wear the clothes. After all, what good is it to buy something with rapper Eve’s name on it and supposedly her aesthetic if she’s being photographed in Louis Vuitton?

Fuentes is clear that that is not the approach she is taking.

“It’s not something I’m making for somebody else. It’s based on my style,” she said. “I think that the one good thing about having a celebrity brand is that hopefully the customer can instantly identify with that person’s style so you know what to expect in the collection.”

That’s not to say Fuentes has abandoned her high-fashion roots.

“I do like to wear some of the high-end designer fashion,” she went on. “But I travel the world trying to find things in different stores or flea markets. I like to mix it up, and I have a collection now where I can put all of my favorite elements in one.”