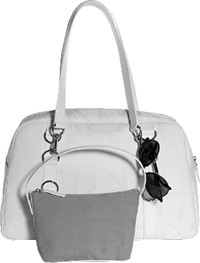 NEW YORK — With the economy showing signs of a pickup, accessories firms of all stripes were breathing a little easier during the November market.

After a challenging year, companies said fall retail sales have been better than expected and they are upbeat about business for spring. A number of makers said this was one of the best markets they have had in two years.

“I feel very encouraged by what we have seen this market,” said Helen Welsh, president and chief executive of the multiline showroom, The Helen Welsh Group. “Business is good at retail right now, people are feeling positive and stores are planning up for spring, particularly in handbags.”

Cynthia O’Connor, owner of the eponymous showroom, said, “I am getting a lot of reorders, especially for big bags, and we are seeing more business in categories that were weaker in the past few years, such as fabric belts and hair accessories. We are trying to bring fun items to our customers and layer on interesting items.”

Many executives said the $30 billion accessories market is not dominated by one trend at the moment, but by a number of key looks.

While color continues to be the big story in all fashion categories, including accessories, firms also are adding plenty of other novelty items to lure customers into stores for spring, such as print bags, whimsical coin purses and key chains. Mod themes are still garnering attention, and the “jelly” handbag made of plastic or rubber was another hot item and could be found at showrooms around town. Many handbags this season come with little extras inside.

“We are focused on adding value and many of our bags come with something extra, such as a key chain, cell phone holder or cosmetic bag,” said Rhonda Brown, president and ceo of Jones Apparel Group’s footwear, accessories and retail division. “The price of the bag has to equal the value that customers perceive.”

In jewelry, chandeliers and big earrings are still going strong, although long and linear looks are gaining ground, as is silver jewelry in geometric shapes, as seen in new collections from Carolee and Colette Malouf. Bridal jewelry is becoming a more important segment of the business. Among the jewelry companies introducing bridal looks this season were Judith Jack and Givenchy jewelry, both of which are divisions of Jones Apparel Group.

As usual, some firms rolled out new brands and divisions this market. Watch company MZ Berger & Co. launched its watch offerings produced under license for David & Goliath and French Kitty. Watches for David & Goliath, a hip brand best known for its quirky T-shirts and sleepwear, will carry wholesale prices of $35 to $45 and includes styles with leather straps and retro styling with oversized cases.

Also introduced this market were watches under the French Kitty name, which carry average wholesale price points of about $35, and include leather looks and modern styling. Distribution for both lines is targeted at specialty and department stores, said Marci Gordon, chief marketing officer.

MZ Berger earlier this year introduced a division to focus on accessories and gifts, and it also has moved into new headquarters in the Long Island City section of Queens, N.Y., and updated its logo to showcase a more modern look. The company did not reveal sales projections for the new lines.

Among other firms, Monsac, the handbag company now owned by Echo Design Group, launched the first full handbag collection under the Echo brand. Echo bags were tested this season at a few stores, but this was the first real debut of the line. The bags are designed to coordinate with spring patterns of Echo scarves and are made of materials such as coated linen, silk and straw, and many styles come with a matching scarf.

Monsac has expanded its showroom to accommodate the Echo bags, which wholesale for between $20 and $70. Stephen Roberts, co-president at Echo, declined to give sales projections, but said, “We are serious about this business and we expect it to be a big opportunity.”

The Nautica name is best known for its sportswear, but the firm has been steadily building up its accessories offerings, and for spring, it has expanded its handbags, produced by Wathne Ltd. and also has introduced footwear, which is made under license by GBMI Worldwide. Its other accessories offerings include watches, which are produced under license by Callanen International and have been revamped to include more fashion-forward looks. Eyewear, made by Marchon, also has been updated to coordinate with the other accessories categories.

“Accessories are a huge opportunity for Nautica,” said David Chu, Nautica’s ceo. “We think it could be as much as half of the women’s business. Right now, we are focusing on making sure the products are right and are well designed.”

The Nautica footwear and handbags are designed to coordinate and feature materials such as suede, nylon, canvas and leather. While the initial handbag line was more athletic-inspired, the new collection includes more styles designed for evening, as well as messenger bags, oversized totes, backpacks and some cosmetic bags and wallets. Wholesale prices for footwear run between $24 and $40, while handbags wholesale for between $25 and $42.

Chu declined to give sales projections for the lines. Nautica, now a division of VF Corp., reported in July that royalty income, which include handbags, watches, eyewear, swimwear, home and men’s fragrances, jumped 19.3 percent to $2.4 million in the first quarter ended May 31.

At the accessories division of Jones Apparel Group, the showrooms have been consolidated so that the full range of handbag and jewelry offerings are in one building, at 385 Fifth Avenue in Manhattan. Jones now makes handbags for its Gloria Vanderbilt, Nine West and Nine & Co., Bandolino and Jones New York divisions, as well as for Esprit, under license, while jewelry brands include Nine West, Judith Jack, and Napier as well as Givenchy and Tommy Hilfiger, both of which are produced under license.

A number of companies held events and soirees around town during market week, including Sector Group, which held a big party at the Bryant Park Hotel to debut its new watch offerings from Valentino, Moschino, United Colors of Benetton, Roberto Cavalli, PZero and Sector.

“We try to keep the soul of each brand,” said Franco Bosisio, design director at Sector, who flew in from Italy to show off the new offerings to buyers last week.

Shaune Bazner, the designer best known for her innovative hair accessories sold under the label Mei Fa, held a special event at the Morgan Hotel to celebrate her 25th year in business. The company is in the midst of rebranding itself so that its jewelry and other accessories carry the label Shaun Bazner, while the hair items will still be sold under the Mei Fa name. Her products are now sold in about 3,000 stores, including Nordstrom, Chico’s and the Boston Museum of Fine Arts.

“It’s been an interesting road,” Bazner said at the event, as she previewed her new offerings, which include earrings and necklaces made of semiprecious stones, such as garnets, as well as glass beads and shells. “I have had a lot of ups and downs and ins and outs, and that’s what makes it fun.”