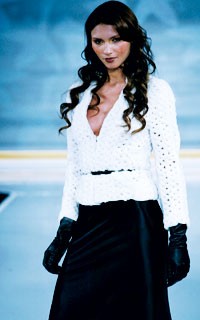 Not so, however, for the multiple-resource show staged by FICA at the Puck Building on Tuesday night. Although its participants hailed from both the veteran and ingenue ranks of the fur industry, this bewildering presentation boasted neither establishment polish nor youthful joie de mode. In fact, as the premier event for an industry that should be giddy with glee given fur’s current editorial glorification, it was pretty much a disappointment. And that’s a shame, especially since the show presented a capsule of everything that’s wonderful about fur right now, starting with its range. The presentation paraded looks both trendy and classic, chichi and rugged, natural and dyed, all supporting the platform that fur should be regarded, not as a category unto itself, ever apart from the main, but as a fabulous, intrinsic element of mainstream fashion. The problem is that, despite the wealth of evidence, its advocates blew their case.

In this era of finely honed, narrow-focus presentations, a group effort faces multiple challenges from the get-go, starting with clarity of message. In reality, Andrienne Landau and Louis Dell’Olio’s furs for LeGar have no more in common than, say, Gucci and Ralph Lauren, so there’s no natural reason for their seamless cohabitation on the runway. Rather, a sense of harmony, or at least of sanity, must be imposed, which is what top-notch producers and stylists are about — not to mention to deliver that essential aura of the au courant.

True, the show displayed the markings of a game effort, but the division of looks into categories such as “Making an Entrance,” “Swingin’ in Black and White” and “Luxury at Play” just didn’t cut it, especially since, even within a given group, the styling looked totally random. Yes, one could make a “Ladies Who Lunch” argument for the vintage-y charmer in Saga mink-trimmed jacket and printed skirt fresh from Peter Som’s own runway, but Byte’s baby blue fox-and-cocktail shaker ensemble would be overdressed for a teatime at a latter-day Belle Watling’s.

To that end, Hello, Sailor will always have its place in fashion. But despite some deliberate runway histrionics by Lu Sierra, for the most part one got the sense that all of the hooker-channeling irony was purely accidental.

Conversely, the terrific furs were anything but. While designers showed some timeless looks, they put their primary focus on fashion, which came in a multitude of guises. Lazar went croc-y at Cassin and snowbound at Alexis & Gianni for Petras Furs. On the raw side, Jean Paul Gaultier reached rugged high chic with ribbed fox and coyote vests, while Louis Dell’Olio’s delicately tattered shearlings for LeGar worked the dreamy side of distressed. Decoration abounded in silvery handpainted flowers on Swakara from Zandra Rhodes for Pologeorgis, fuchsia ribbons woven into black shearling from Dominic Bellissimo for ITA Ltd., Kaitery/Dena’s pale sheared mink jacket with Swarovski closure and Zuki’s wildly exuberant florals. By comparison, the ice mink coat inset with lamb suede strips from the premier Foxy Brown Collection by Alexis & Gianni looked downright discreet.

Some items played to the fluff-loving girly-girl — Royal Chie’s pink mosaic bathrobe shown over a matching mini; Byte’s new take on that current fashionista favorite, the pastel stole, worn with amusing indiscretion as a halter top with jeans. Other fabulous pieces, such as those by Sorbara Furs for Neiman Marcus and Carmen Marc Valvo for SAGA, evoked traditional notions of glamour, some way too kitsched-up for their own good.

All of which is to say that, by not anteing up for a properly produced show, the fur industry may be proving itself woefully shortsighted. The cliché nails it: Timing is everything. Fur houses have the opportunity to seize the fashion moment and grab it back from ready-to-wear designers, but only if they compete on like turf. They have the goods. What they need is the will.