Prada's Carlo Mazzi, Giovanni Tamburi and Kean Etro were among the speakers.

MILAN — What’s the future of luxury? That’s the major question that Gerd Leonhard, future strategist and chief executive officer of The Futures Agency, tried to answer with the speech he gave on Wednesday in Milan during the Luxury Summit organized by the 24 Ore Business School, in collaboration with economic newspaper Il Sole 24 Ore.

“Millennials and the Generation Z expect very specific things from companies: a holistic business model, circular economy and the respect of human rights,” said Leonhard, who put the focus on embracing technology while preventing any sort of de-humanization. “Passion, persuasion, imagination and storytelling are essential to the future and they cannot be achieved through technology and machines.”

In addition, Leonhard highlighted those he thinks will be the luxuries of tomorrow: off-line, privacy; not exponential growth, and experiences.

The idea of experience is at the center of the strategy that Giovanni Tamburi, president and ceo of investment merchant bank Tamburi Investment Partners, is developing with Italian retailer OVS, which operates 1,700 stores. In March, TIP invested 74.9 million euros in the company, becoming its main shareholder with a 22.7 percent share.

“We want to move from the idea of purchase to the concept of experience,” said Tamburi. “Amazon can do what it wants, but the physical store will be more and more important in the future,” he added.

Tamburi, which acquired its share in OVS from Coin Group, made its investment in a difficult moment for the retailer caused by the financial troubles following the acquisition of a Swiss retail chain, which generated losses on the stock exchange.

“The financial market is often wrong,” said Tamburi, who admitted he firmly believes in the potential of OVS. “We invest in talented, brave entrepreneurs who are a step ahead.”

This is the case, for example, of Remo Ruffini, said Tamburi, who seven years ago invested 150 million euros in Moncler. “When they offered me this opportunity, I didn’t want to do this operation but I found in Ruffini such a humility and simplicity that we basically made the deal the same night we met for the first time.”

Among its investments, TIP also controls 20 percent of food retailer Eataly, which operates stores around the world, including Milan, where the company generates sales of 40 million euros, and a unit in New York, which registers a turnover of $100 million.

Among the issues that emerged during the summit, Maurizio Castello, partner of consulting firm KPMG, put the accent on the fact that since consumers are becoming more and more informed, companies have to deal with the misalignment of prices online.

“The price differences between the company’s online shop and the multibrand e-commerce can generate three different situations: brands might see their reputation damaged, they might miss the opportunity to make revenues because a potential customer goes to another brand or in the last case they might see their margins decreasing since shoppers decide to buy a product on a multi-brand platform at a most advantageous price,” said Castello.

To prevent these potential problems, he stressed the importance for companies to make a more in-depth and precise use of analytics with the goal of having a real-time monitoring of the online market.

Consumers’ awareness and shopping habits are additionally driven by sustainability, which is increasingly shaping the future of the luxury industry.

According to Prada Group’s president Carlo Mazzi, “sustainability is an overused word. Today is used in any occasion, everywhere, but we need to understand its meaning first. Sustainability is the value of the future generation, therefore we can no longer be surprised it is necessary.”

During his speech, Mazzi repeatedly professed prudence in considering each aspect of the sustainable topic in its complexity, ranging from diversity to animal welfare. As reported, Prada Group has recently implemented the Diversity and Inclusion Advisory Council and has revealed it will stop using animal fur in its designs and new products starting from the spring 2020 women’s collections.

Referencing the group’s own beginnings in facing the topic, Mazzi said the company’s first approach in terms of social sustainability was to support the arts. “Establishing the foundation [Fondazione Prada] was never conceived as a way to promote the brand and qualify our products, but as a spontaneous social need that has enriched this company’s founders and contributed to its peculiar influence,” he noted.

To highlight the importance social sustainability still has for the company, Mazzi said the group will build a factory in Romania that will be designed by Italian architect Guido Canali, who already conceived the company’s Tuscan green plant. “Nobody asked us to do this but we believe we will have a return of the cost in the short and long term. We want to guarantee a comfortable workplace,” he said, adding that offering training programs to employees is also key as “cultural enrichment can represent an element of satisfaction” for workers.

“Sustainability is also an economic opportunity,” said Manfredi Ricca, global chief strategy officer of brand consultancy Interbrand. In an engaging presentation, Ricca identified two elements luxury fashion brands are considering and leveraging better than other industries: Inclusivity as “ brands have left their ivory towers and are more and more inspired by what is happening in the streets and some are even adopting the same language,” and strong individualization, which is also favored by the opportunities technology can offer.

“By combining these two aspects, companies can give a huge contribution to a market that counts 1.3 billion people and is worth $8 trillion but that less than 5 percent of the industry is looking at: disability. What’s more inclusive and close to the real needs out there?”

Ricca referenced different disabilities, underscoring that “people in wheelchairs represent just 5 percent out of the total,” and highlighted how the luxury market is still behind compared to tech companies, including Apple and Microsoft, in offering relevant and desirable solutions to this category of consumers.

“This industry is all about enhancing our own differences, talks a lot about customer experience and design and yet nine stores out of 10 are not equipped to welcome disabled people and, paradoxically, there are more fashion brands conceived for dogs rather than for disabled individuals,” he said.

A provocative video on the topic also showed that 90 percent of the companies prioritize diversity, a hot topic at the moment, yet only 4 percent prioritize disability.

“Sometimes fashion players disguise diversity with some easy augmentations but the companies creating real value today are the ones that have the courage to take a strong position. Perhaps what I’m saying is a bit extreme but environmentalism was considered the same way in the past and now is the top priority on everybody’s agenda,” he concluded. 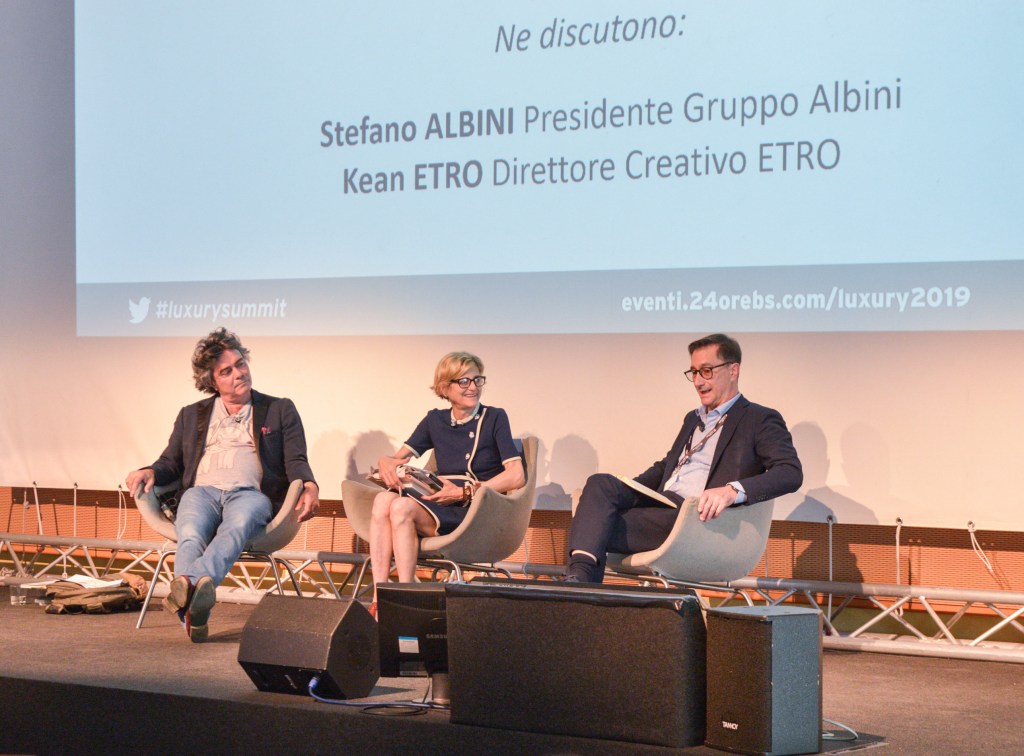 “Our clients want to focus on just a few suppliers, the ones that can guarantee a transparent and traceable processes,” said Albini, who mentioned a range of innovative projects his company is implementing, including a dyeing process employing marble powder and just a liter of water to dye one kilo of textiles, instead of 150 liters.

“We are finally seeing an opportunity in the market,” said Etro, who started professing a green and responsible approach more than 20 years ago. “Until two seasons ago, I remember going to Milano Unica and inciting people like Stefano [Albini] to stay strong, because there are companies that really invested a lot in sustainability.”

According to the designer, luxury brands could sell more sustainable products by exploiting the logo-mania trend, which is what consumers are demanding. “The storytelling of sustainable products is complex, it’s more for scientists rather than fashion people but that could be a smart move to penetrate in the market little by little.”