He’s also prepping his first sneaker, and plans to spin some wild tales around his collections.

LONDON — Like Marty McFly in “Back to the Future,” Nicholas Kirkwood’s Nike-clad feet can slide easily in and out of decades in a flash. One minute it’s the Eighties, then suddenly it’s the 21st century — and beyond — to a time and place where footwear can dissolve right back into nature.

Those movies inspired Kirkwood so much as a kid that when he saw Marty’s self-lacing Nikes in “Back to the Future Part II” he dreamed up his first pair of shoes, accordion-like creations that could stretch to fit every foot size.

Decades later, Kirkwood hasn’t stopped inventing and continues to look for ways to fuse fashion, art and technology as he projects his business, which is backed by LVMH Moët Hennessy Louis Vuitton, into the future. One of his goals is to make fully sustainable shoes, and while he’s already started that journey, he admits it will take a while.

He is already producing with the circular economy in mind, and has started making and using biodegradable components. To mark World Earth Day, he’s reimagined his Beya mule as an environmentally friendly slingback style for Net-a-porter, with a price tag of $695.

The “conscious Beya” collection features recycled denim, as well as leather uppers that underwent a toxin-free, chrome tanning process. Insoles have been made with reduced levels of energy consumption, waste, and toxic substances, while durable biodegradable leather went into the linings.

Insoles have been created with 100 percent recycled carton cardboard, while the shoes’ block heel is made of ontano wood, a common tree that demands much lower energy use during the production process than other woods and can be dried naturally rather than with chemicals.

Kirkwood believes sustainability should be a given, a social responsibility that completes every fashion company — but it should be not get in the way of aesthetics.

“If a shoe is biodegradable, it shouldn’t look like it’s made from quinoa,” said Kirkwood from his sunshine-filled, open-space offices in London’s Soho. He draws a comparison with the arrival of the sleek and silent Tesla on the automotive scene. “Yes, there were electric cars before, but they looked like utility vehicles,” he said, adding that Elon Musk’s machine made people see the cars in a new way.

Kirkwood is fired up about the possibilities that lay before him, especially with footwear, a toxin-filled, wasteful industry where new shoes are simply discarded, rather than broken down into components, if they don’t pass quality control.

“We face challenges in the footwear market that don’t exist in the ready-to-wear sphere. But we’re taking them head on, and have made some major progress in our production process. And there are so many tools available to us now to design much more sustainably,” he said.

Designers and brands, Kirkwood believes, “can really help guide, or develop, the materials that will be used in the future,” although they also have to be realistic in their environmental ambitions.

“It’s also about being transparent about materials when they’re not good, and about areas that need improvement. That doesn’t mean we’re going to stop using some materials, let’s just find a way to make them better.”

Looking ahead, all nonprinted and noncolored (black and nude) shoe linings in Kirkwood’s footwear collections will be fully biodegradable starting from the fall/winter 2019. Next season, Kirkwood hopes to be using biodegradable soles in all of his shoes.

As he channels his energy into thinking about nature and conservation — he has pop-ups open at Harrods and Selfridges that show plants and flowers “powering” computer monitors, the theme of his dystopian September show — Kirkwood has been moving rapidly on other fronts, too. 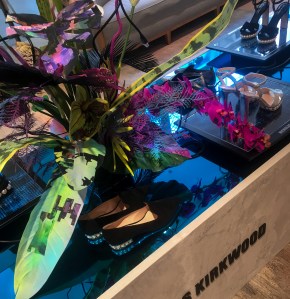 A glimpse of Kirkwood’s pop-up concept, with plants powering machines.

He has a new managing director in Nina Zukanovic, who stepped into the role in January following the departure of former chief executive officer Sophie Brocart, who was named ceo of Jean Patou, another LVMH company, last year.

The arrival of Zukanovic, who was previously merchandising director, women’s leather goods, at Louis Vuitton, where she worked for much of her career, is a fresh start for Kirkwood. With Zukanovic at his side, the designer is putting a renewed focus on creativity and looking at alternative ways of presenting his collections, to the industry and to consumers.

Kirkwood is pushing his designs forward, and looking at ways to reconcile glamour with comfort. 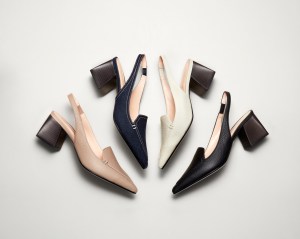 Nicholas Kirkwood has put a sustainable spin on his Beya shoe for Net-a-porter.  Courtesy

“Painful shoes, having to get a taxi everywhere, pulling off your shoes and massaging your feet during the day — I don’t think anybody wants that. Everyone has been spoiled by sneakers to some extent,” said the designer, adding that comfort and glamour can be reconciled.

“It’s a really important thing that needs to be addressed: ‘Can you make really amazing shoes comfortable?’ Yes you can! I want to make shoes for women who are on the go, shoes that fit with their lifestyle. Where these things join, that’s where the future is.”

As he develops that shoe of the future, he’s also preparing for the launch of his first sneaker, tentatively dubbed the NKP3, next month in London. He describes it as resembling an Eighties Nike Air Max, and admits he wears his own Nikes to death, and spray paints them for fun.

“Sneakers are absolutely here to stay. My feeling is that there will be a move to more elegance, but they’ll still be there, they’ll still be important in the business,” he said, adding that while he may be a sneaker enthusiast, he has no plans to make sneakers the focus of his own collection.

In the midst of all these changes, Kirkwood is also thinking about how he shows his collections and the stories he wants to spin around them. 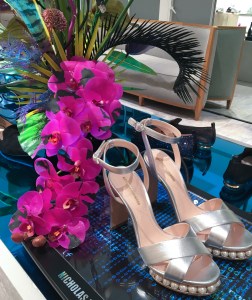 “The way I see it, brands of the future are going to be almost like media companies that make products. I remember when I was a kid and you’d have Transformers. We bought the toy because we liked the cartoon. We didn’t realize that, actually, the cartoons were made by the toy company, rather than the toys being a spin-off of the cartoon.”

He said a storytelling, mood-setting approach works because it “galvanizes your audience and gives them more than just the product. I want to tell narratives within each season, and not purely as a stage set. I’d almost like to see each season like a Netflix season — entertaining, engaging and sending a message that isn’t just saying ‘We’re a product.’”

To wit, Kirkwood is thinking about creating imagery, films and illustrations — even comics — that can work as a single narrative for each collection. The first glimpse of that idea will come in June, during his fall/winter 2019 see-now, buy-now presentation at Claridge’s in London.

He’s looking to blur the concepts of time, space and culture and transport visitors to another realm. In the meantime, there’s still a lot of work to do, back here, in 2019.