The Cornwall summit, and a British Fashion Council forum, showed just how serious British designers, businesses and public figures are about promoting the circular economy, and nixing waste.

By Samantha Conti
with contributions from Natalie Theodosi
on June 14, 2021

Boris Johnson and Carrie Symonds greet Moon Jae-in, president of the Republic of Korea and his wife Mrs. Kim Jung-Sook at The Carbis Bay Hotel at the G7 summit in Cornwall.

LONDON — British fashion’s biggest outing this year didn’t happen on a Zoom screen, via YouTube or even during London Fashion Week’s June edition, which wrapped on Monday.

It happened on the Cornwall waterfront during the three-day G7 summit, which turned into one big advertisement for British designers, homegrown fashion rental platforms My Wardrobe HQ and Hurr Collective, and the circular economy.

Who could miss Stella McCartney decked in a printed white cape dress of her own design, made from Forest Friendly Viscose? Or Carrie Symonds, Boris Johnson’s new wife, wearing outfits — from brands including The Vampire’s Wife, Amanda Wakeley, and Damselfly London — all rented, for a few pounds, from the British platforms?

The Duchess of Cambridge, meanwhile, turned to one of her favorite brands, Alexander McQueen, for the fitted red dress she wore for an appointment with First Lady Jill Biden and a group of schoolchildren at the Connor Downs Academy.

Queen Elizabeth, meanwhile, tapped her longtime designer Stewart Parvin for the floral print jacquard dress that she wore to tea at Windsor Castle with President Joe Biden and the first lady on Sunday afternoon. 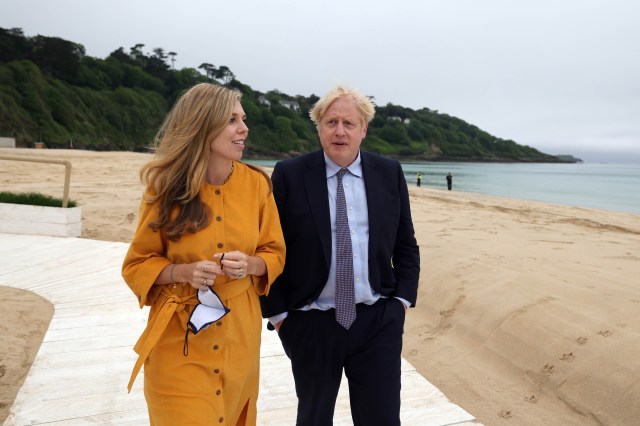 Prime Minister Boris Johnson and his wife Carrie Symonds in Cornwall ahead of the G7 summit.  Courtesy of Andrew Parsons / No10 Downing Street

Those images, beamed across the world, gave British designers, businesses — and the all-important sustainability conversation — a much-needed boost at a time when the country remains in the grip of COVID-19.

On Monday evening, Johnson revealed that “freedom day,” or the final lifting of lockdown restrictions set to happen on June 21, will now be postponed until July 19, due to the stubbornly high number of infections from the Delta, or Indian, variant of the virus in certain parts of the U.K.

The British government said it wants as many people as possible vaccinated as the variant spreads, and it wants to reopen the U.K. on July 19 for good.

Meanwhile, the fashion on display sent a strong message about British creativity and the growing importance of the circular economy during the G7, where climate change was among the many topics under discussion.

People watched, and listened: After Symonds wore a rented dress from The Vampire’s Wife at the G7 dinner on Friday, Hurr Collective said it saw its “biggest number of sign-ups” since the site launched in 2019.

Wakeley, who confirmed last month that she was shuttering her business, got an unexpected boost when Symonds wore her cobalt blue suit with wide-leg trousers to meet the presidents of South Africa and Korea.

The suit, rented from My Wardrobe HQ, was proof that certain pieces can have a long life even after a business has shut.

“It is always an honor when people in the public eye wear Wakeley,” said the designer. “And by renting her suit, Carrie Johnson is underscoring the quality and sustainability of Wakeley design and craftsmanship.”

A spokesperson for MWHQ said there was undoubtedly a “Carrie” effect during the summit. 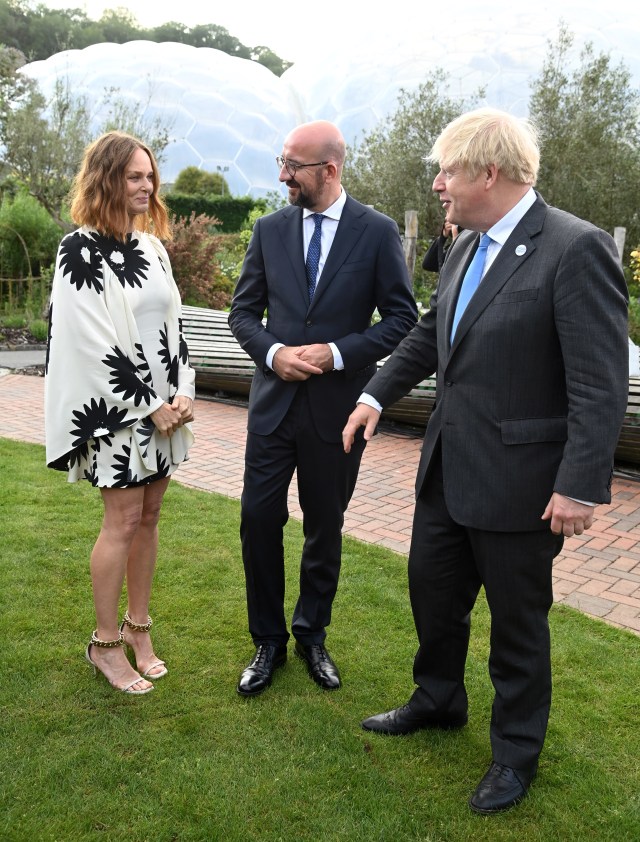 Stella McCartney with Boris Johnson at the CEO cocktail reception at the Eden Project during the G7 Summit in Cornwall.  Image Courtesy of Karwai Tang/G7 Cornwall 2021

“We observed a spike in rental orders over the weekend, and received many calls and inquiries in particular about the blue items she wore, including the Damselfly London floral dress. The Amanda Wakeley jacket has since sold out,” the spokesperson said.

The Damselfly dress rents for 8 pounds a day, and costs 295 pounds to buy. The brand has a strong green message, too.

According to its website, Damselfly uses excess fabrics ordered by other designers and garment manufacturers and works with local suppliers. The company also asks its customers to use GreenEarth, a dry cleaning method that uses silicone, which is non-toxic and non-hazardous, as an alternative to petrochemicals.

Another Symonds outfit, the L.K. Bennett “Sina” dress, which she wore for a meet-up with the Bidens last Thursday, saw an uptick in demand. L.K. Bennett said it experienced a 333 percent jump in sales for the item, according to a company spokeswoman. It is currently retailing for $368, having been marked down from $460.

Geraldine Wharry, a London-based fashion futurist, designer and educator, said the wardrobe choices that Symonds made sent an important message, although she was disappointed with the outcome of the G7 as a whole.

“It’s important when someone like Boris Johnson’s wife wears rental because it shows the mainstream what to do,” said Wharry, adding that people with different sets of purse strings know that sustainability is important “but they don’t necessarily understand how it can work.”

She added that “fashion is a political statement,” and while the G7 hasn’t traditionally been a platform for fashion, the urgency of what is happening with climate change has prompted women like Symonds and McCartney “to campaign through their clothing.”

Wharry said that from a fashion point of view what people witnessed at the G7, was “the mainstreaming of sustainable choices. They were good steps, but there is still so much to be done.” 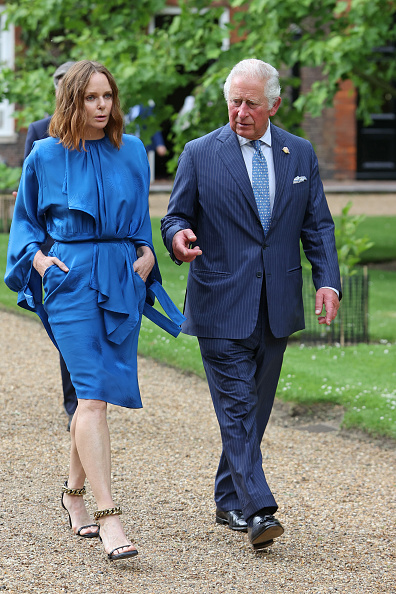 McCartney not only wore sustainable fashion in Cornwall, she also argued a case for it during the G7. As reported, she met with international leaders as part of a delegation of chief executive officers assembled by Prince Charles, a longtime environmental campaigner, as part of the prince’s Sustainable Markets Initiative

The CEOs represent more than 300 global business leaders who form part of the Coalition of the Willing, convened by The Prince of Wales.

Ahead of the G7 meeting, McCartney talked to Prince Charles’ team at St. James’ Palace, saying: “My message to the big companies of the world on climate change and climate crisis would be, ‘Look, this is the future. This is not really about us, and if you want to be important, to be part of the conversation, to be cool and relevant in your business, then you are going to have to react now.’”

McCartney, who was wearing a blue Forest Friendly Viscose blue dress with vegan shoes during her St. James’ Palace talk, added that addressing climate change is about “the next generation and the consumer, who won’t really settle for less. So if you want to be part of the problem-solving situation you’ve got to stand up now.”

As the G7 catwalk show was taking place, so was the June edition of London Fashion Week. It was a series of digital shows and events curtailed by the ongoing social distancing restrictions. And while it may have been a quiet showcase, it carried a substantial sustainability message of its own.

Last Thursday, before the three-day event began, the British Fashion Council held its inaugural Institute of Positive Fashion Forum, a thought leadership event meant to galvanize the British fashion industry and businesses into global collaboration — and local action — ahead of COP26, the 2021 United Nations Climate Change Conference that will take place in Glasgow in November.

During the day-long forum, speakers and participants examined the findings of an Oxford Economics report commissioned by Clearpay and the BFC about the state of retail post-COVID-19, consumer behavior and the drivers of economic recovery.

Earlier this year Clearpay became the principal partner of London Fashion Week with a significant two-year deal that will see the buy now, pay later platform underwrite all of the British Fashion Council’s talent initiatives, support local designers and offer consumers greater access to brands and members of the industry. 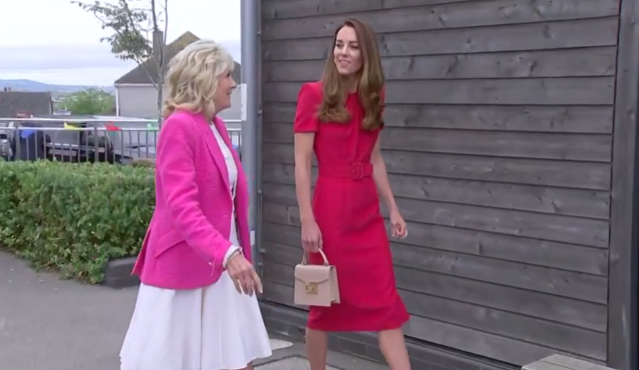 U.S. First Lady Jill Biden and the Duchess of Cambridge in Cornwall for the G7 summit.

Hence the importance of Symonds’ and McCartney’s messaging to the mainstream.

During the London showcase, young designers also participated in the sustainability conversation, with many moving away from the concept of seasonal or mainline collections and thinking carefully about how they source and what they produce.

Robyn Lynch, the Irish-born up-and-comer who is part of the NewGen talent support scheme, said she is pressing pause on mainline collections and the wholesale market in favor of one-off capsules and collaborations with heritage brands.

This season, she approached the sports label Columbia, which she had associated with many a childhood memory, and offered to design a capsule using some of their deadstock fabrics.

The result was a sporty range featuring cool puffers, knits and tracksuits galore with the Columbia logo splattered all over them. It was presented with a short film set against the coast of Dorset, England.

Per Gotesson, another young London name known for his avant garde approach, also presented a season-less range of denim separates and crocheted, barely-there knit tops to coincide with the label’s e-commerce launch.

Stepping away from the seasonal fashion calendar clearly makes sense for these labels. It saves them from hard-to-cope-with manufacturing deadlines and cash flow issues, which have traditionally been problematic for London’s smaller design houses.