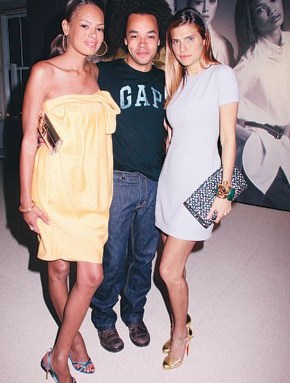 NEW YORK — “He’s my date,” joked Amy Sedaris, flashing her white Philip Crangi cuff bracelet. The comedienne was, of course, referring to Crangi himself, whom she accompanied to Monday night’s launch party for Gap’s newest Design Editions collections in partnership with the CFDA/Vogue Fashion Fund.

Sedaris wasn’t alone in making the date the must-have accessory for the night. Thakoon Panichgul arrived on the arm of stylist Tina Chai, Phillip Lim came with Elettra Wiedemann, and Patrick Robinson was giving Tory Burch a tour of the special white shirt collection, as well as his first designs for Gap, where he is an executive vice president of design.

“You can sort of tell the designers by the pieces,” Robinson said of the white shirt interpretations by Band of Outsiders, Michael Bastian, 3.1 Phillip Lim and Threeasfour, as well as Crangi’s jewelry.

“I want a lot of it,” Burch admitted.

“I am a pencil skirt wearer, so I always need a white crisp clean top,” Bell said, checking out the white shirts on display.

Council of Fashion Designers of America executive director Steven Kolb, meanwhile, was eyeing Crangi’s pieces. “I don’t really wear jewelry, but I would wear one of these necklaces with a button down shirt,” he said. “But I would have to get up early,” he added of the Tuesday morning launch at Gap stores nationwide.

Gabi of Threeasfour admitted he was less likely to don any of the special Gap designs. “The girls may,” he said, referring to his design partners Adi and Ange. “I am very much into wearing Threeasfour, which means I get to wear a lot of women’s wear because we don’t make men’s wear. I would love to start men’s wear soon, though.”