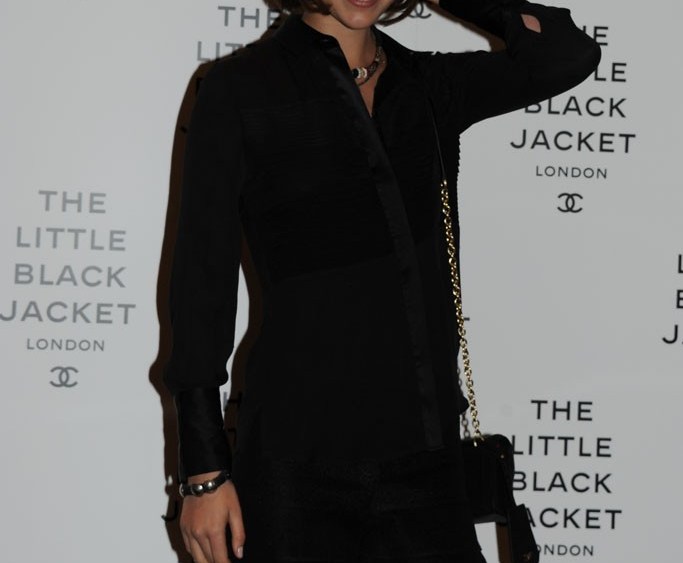 LONDON — “I’m wearing a black jacket — how unoriginal,” said Jasmine Guinness at the launch of Chanel’s Little Black Jacket exhibition, which landed in London this week at the Saatchi Gallery near Sloane Square.

“I’m going for the china doll look,” said Tallulah Harlech of a very girly, embellished white dress with a full skirt — an old Chanel number. “And it’s comfortable, so I win all round!”

Lagerfeld, who was pursued by fans for most of the evening, had his mind on — what else? — work. The designer said he’ll begin shooting the Fendi ad campaign on Sunday, and will also be photographing a story for Harper’s Bazaar. “But I don’t like to say in advance what it is,” he added.

As the Chanel dinner rolled along, Jimmy Choo’s creative directors Sandra Choi and Simon Holloway were busy co-hosting one of their own with Stefano Tonchi of W Magazine to mark Rob Pruitt’s collaboration with the brand.

Pruitt, the artist most famous for his glitter panda paintings, admitted his creativity shifted into overdrive at the start of the project, a capsule collection of accessories that’s part of Choo’s 2013 cruise offer.

“When I met Sandra and Simon, I had some initial ideas — some of them crazier than others. I really wanted some hi-top basketball sneakers and some sunglasses like Elton John would wear in the Seventies onstage, but it was getting too much, too big,” he said.