John Galliano’s exuberant approach to men’s wear is about to find a broader audience as Galliano, the designer's new diffusion line. 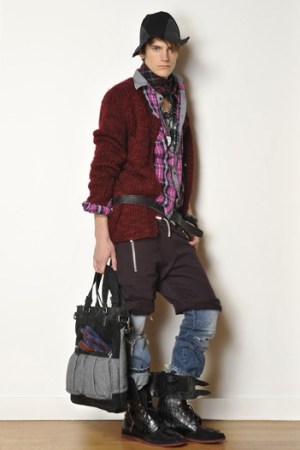 John Galliano’s exuberant, eclectic approach to men’s wear is about to find a broader audience as Galliano, the designer’s diffusion line produced by Ittierre, launches in Milan on Monday, during men’s fashion week. For its first men’s outing, Galliano is definitely hitting a young streety vibe. The collection is focused on cool casual outerwear, stonewashed denim, distressed leather, tartan wool and sporty fleece. But count on John Galliano to make it his own, with a rock star attitude and a Boho twist. He cobbled classic pieces such as a tartan wool duffle with the sleeves of a military parka, and a denim jacket with tailored sleeves. The collection also uses the famous “Galliano gazette” print, presented this time in a subdued black and gray or military green version for the linings of the parkas, on the quilted nylon down jackets or overprinted on denim pieces. Here, a preview of the contemporary sportswear line, and a few words with the designer and consummate showman.

WWD: What are the design influences in this debut season?

John Galliano: It is pure Galliano. It is inspired by the attitude and anarchy of the London rock scene. It’s a very urban attitude. It shares the same DNA as John Galliano Homme. It is quirky, cool, streetwise.

WWD: Why launch this line now?

J.G.: The men’s collection has been steadily growing in content, as well as commercial appeal. It was a good opportunity to streamline the men’s collection and create a diffusion that would enable us to expand our clientele, as well as the characteristics of [the Galliano wearer]. It’s not just women that want more choice, more styles, more options. I want to establish a diffusion line that would complement [the main line] and could pepper a man’s wardrobe with all the essentials, and Galliano flavor.

WWD: Who do you see wearing it?

J.G.: Everyone and anyone. This is for guys that have their own ideas, own identity and want to express themselves through style.

WWD: Will you wear it?