Gant to Launch Women’s in Canada

Gant is extending its distribution deal with Toronto's Jaytex Group to retail its women's sportswear for spring 2007. 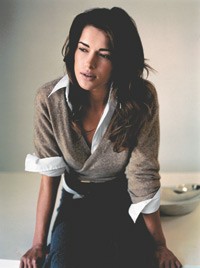 NEW YORK — Gant is sending its women’s line to Canada.

Encouraged by the success of its spring 2006 men’s relaunch in Canada, the Swedish brand is continuing its exclusive distribution agreement with Toronto-based Jaytex Group to retail its women’s sportswear for spring-summer 2007.

The move reflects Gant’s goals of growing the women’s wear category and its North American presence.

“We feel that our North American expansion plan is now completely intact,” said Ari Hoffman, president and chief executive officer of Gant USA. “Since we are available in more than 60 countries, we have really become a meaningful brand worldwide.”

Gant, which did about $850 million in global sales last year, is known for its preppy men’s wear, and introduced women’s collections to the U.S. last year. Women’s wear now represents one-quarter of the company’s sales in North America. Hoffman anticipates that the women’s business will be on par with men’s in a few years.

In that time frame, he also hopes Canadian volume will make up one-fourth to one-third of Gant’s worldwide business. Gant’s Scandinavian roots — and the outerwear and heavy knits they inspire — make the brand a good match for Canadian consumers, Hoffman said. “We have a major presence in the Scandinavian markets, and if you trace it across a map, you see Canada is at the same latitude,” he said. “The weights and lifestyle of our clothes are perfect for Canada.”

In 1999, Gant AB — with a major investment from LVMH Moët Hennessy Louis Vuitton— bought the brand from Phillips-Van Heusen Inc. for $72 million and halted its business in North America. The new owners were not happy with the lower-quality product the brand sold in the U.S. and Canada, compared with Gant products distributed in Europe, Hoffman said.

“After a year break, we relaunched in the U.S., but this time with the original, high-quality Gant product that is available in the rest of the world,” he said. “We are after a better business and a better quality. We do not want to reinvent the wheel and make different products for the Canadian market — what we are doing is right for Canada.”

This story first appeared in the July 19, 2006 issue of WWD. Subscribe Today.

Jaytex president Eric Grundy said the distribution company is tripling its men’s fall order compared with spring, and doubling the number of stores that carry the line. “Sales have been very positive so far, and I’ve been very encouraged by the response,” Grundy said. “I don’t see the reaction here being any different for the women’s lines as it’s been for the men’s.”

Jaytex is prelaunching the women’s line at Hudson’s Bay for fall, and then sending it to 50 to 75 doors in the spring.

Hoffman attributes Gant’s international success to its local partnerships, like that with Jaytex in Canada. As Gant completes its North American expansion, Hoffman is refocusing his attention on South America, where there are already freestanding Gant stores in Colombia, Guatemala, Honduras, Panama and Venezuela. “Everyone talks about China, India and Russia, and we have stores in all of these markets,” Hoffman said. “But not a lot of people can talk about some of these more difficult emerging markets, but we are able to partner up successfully.”

Gant plans to open five more stores in South America by the end of the year.