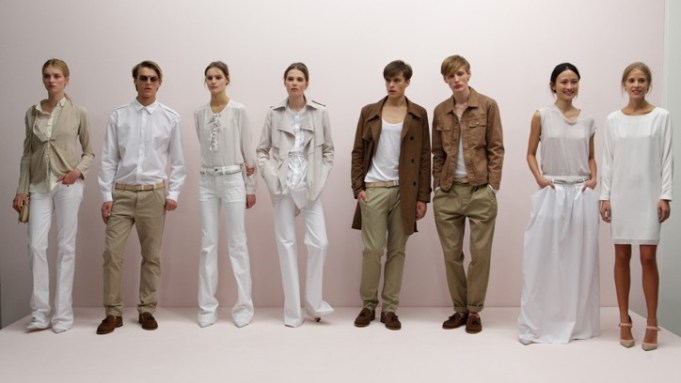 Patrick Robinson unveiled Gap’s global spring collection on Wednesday night in London, and it’s packed with fluid, sophisticated looks and a part-pale, part-earthy color palette clearly inspired by the designer’s days working for Giorgio Armani in Milan. He offered up basics with flair, including sleeveless denim tops with wide ruffles around the armhole, floaty blouses with ribbons, pleating and other flirty details, boxy knitted shift dresses with chiffon details, and short slouchy jackets paired with his new, wide-legged, high-waisted trousers.

“Sexiness and sophistication — Europeans get it and they demand it,” said Robinson, Gap Inc.’s executive vice president for global design, during a walk-through before the show. “My biggest hurdle has been to change the mind-set of the Gap customer in the U.S. who grew up with the brand and automatically thinks of basics. What I want to offer are interesting essentials — fashion, excitement, newness. But the challenge is: how quickly do you walk the traditional customer toward this, how do you push their minds in that direction?”

The 45 looks were on display in a static show in a brightly-lit basement space in central London. In addition to the tailored jackets and frilly shirts, the collection was heavy on cotton knits, including hooded sweatshirts and sleeveless T-shirts, and draped sweaters with twisted collar details.

Robinson said more than the designs are changing: “With blouses, for example, maybe we’ll have a choice of 30 — but only in one or two colors, so everyone can feel like they are making an individual choice.”

The designer said his mission was to dress his customers for the modern American lifestyle, and to offer clothing that can go from day to night, from office to an evening out. “Heritage doesn’t turn me on — it’s about America today. Let’s face it, a 28-year-old wants more fashion in his or her wardrobe,” he said.

According to Stephen Sunnucks, Gap’s European president, the aim is to boost the brand’s sales outside the U.S. and online to 27 percent of the business by 2013 from the current 12 percent. “The goal is to build global flagships on key streets in key cities in order to build the brand,” he said. “Then we’ll branch out to malls and to high streets in smaller cities.”