Jean Paul Gaultier loves couture, whether it’s haute or made of dough, as his exhibition of baked confections at the Cartier Foundation of art attests. 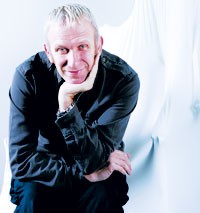 PARIS — Jean Paul Gaultier loves couture any which way, whether it’s “haute” or made of dough, as his quirky exhibition of baked fashion confections at the Cartier Foundation of contemporary art here attests.

He even loves couture half-cooked, disclosing to WWD that he plans to introduce what he’s tentatively calling “semi couture” in January. It will be a collection of ultraluxurious dresses requiring only one fitting, which will be sold exclusively at his dozen or so boutiques.

“I think that this could be the referring to the dwindling number of purveyors, with Emanuel Ungaro, Donatella Versace and Hanae Mori bidding farewell to high fashion this season alone. “We need to find a way to make couture more modern.”

Indeed, Gaultier has emerged as a poster boy for the future of couture, and his new, grand 50,000-square-foot headquarters on the Rue Saint Martin here — with its sweeping staircase, soaring volumes and gargantuan runway theater — speaks to his commitment to the métier, a treasured French institution he joined in 1997.

“This is our investment in couture because we believe in couture,” declared Donald Potard, president of the house and a childhood friend of the designer, as he led a tour of the building, with its ornate moldings and massive stained glass panels. “This is what you expect for a couture house.”

In an interview about his company — which owns a brand with retail sales of almost $700 million worldwide — and career, Gaultier insisted couture, if it is to survive, must not be defined by old rules, but by contemporary standards of creativity and quality.

In his estimation, several designers currently make some rtw that could be described as “modern couture,” including Azzedine Alaïa, Rei Kawakubo and Martin Margiela, his former assistant whom he recently succeeded as the women’s wear designer at Hermès. “Also, Hermès, I must say, is definitely modern couture; honestly all the jackets are made with a quality that is flawless,” he said.

Gaultier said his forthcoming “semi” couture” would make exceptional clothes — made with the “haute” capabilities of his atelier — more accessible and timely.

“In the couture, even if we show in July, orders are usually not taken right away. Most orders arrive in September, and then it takes a month or more to make the dress,” he explained. “With the ‘semi’ couture, and one fitting, the outfit could be ready in two weeks. I think that’s a good solution.”

Certainly other designers seem to be on a similar wavelength. Ungaro, for example, while leaving the couture runway behind for good, said he hopes to continue servicing and attracting an upscale clientele with a new hybrid of couture and rtw delivered at the speed of modern times, as reported. It is slated for a fall introduction.

Even Miuccia Prada has an intriguing project under way at her new Paris headquarters, where upscale clients and celebrities can come and buy special made-to-order versions of her designs.

Gaultier’s “semi” couture, priced somewhere between rtw and haute couture, is expected to help widen the customer base and appeal of exceptional, ultraexpensive clothes. “It will not replace couture, but be an addition to couture,” Potard stressed. “We have to be a little modern.”

Given his reputation as the bad boy of French fashion, his penchant for theatrical shows and such fabulous friends as Madonna and Luc Besson, Gaultier is often perceived as a designer who prizes creativity over commerce. But both the designer and Potard balk at such suggestions.

“Making clothes should not be equated with show business,” Gaultier stressed. “It’s always better if dresses are worn.”

Indeed, that’s why Gaultier opted to show creations made of bread — including crusty bustiers and brioche-breasted dresses — rather than real frocks when the Cartier Foundation invited him to mount a solo exhibition there, which runs through Oct. 10.

Potard echoed the point in a swipe against made-for-the-runway fashions.

“Who are the customers of couture today? Do we want to make couture and work for museums or do we want people to wear our clothes?” he asked. “In our showrooms, we show clothes that people can buy. This is a commercial building.

“It’s not that we don’t like museums, but in museums we show bread, ” he added with a chuckle.

As a business, couture operations at Gaultier lose money, although the publicity and cachet of couture have anointed the brand with more credibility in the luxury market and given it greater international notoriety, Potard said.

Couture sales at Gaultier were not disclosed, but the house acknowledged they have remained at about the same level for the past three years, with demand peaking in 2002. And even though the house showed only 26 couture dresses in January, it projects sales to remain steady enough to keep its 60 couture workers busy.

The couture salons, with gleaming black floors sure to make skirted women blush, occupy prime real estate in the new headquarters, with customers ascending the grand staircase and offered use of a powder room with the same 36-foot ceilings as the showroom, decorated in what Potard describes as “surreal style.”

The new headquarters concentrates all Gaultier functions under one roof for the first time — including design studios, couture atelier, administration and showrooms — and all 190 employees.

And it will be the site of six Gaultier runway presentations per year: two for couture, two for women’s ready-to-wear and two for men’s wear. The room is rigged with cables and moveable walls like a theater to accommodate different moods and decors for the various shows.

“It’s our little Broadway,” Potard quipped. “Our job is not only to produce clothes and accessories.…Our job is to create dreams and this is part of the dream machine.”

Still, Gaultier, who started his fashion career at 18 as an assistant to Pierre Cardin, remains a designer firmly grounded in reality.

Despite his stature as one of France’s biggest homegrown fashion talents, he’s not the sort of fashion star to be chauffeured around town in a limousine. He hoofs it in his bowling-style shoes, lugging his favorite black backpack whether he’s taking a stroll in the Marais or watching Potard get decorated with the Legion of Honor at a fancy French ministry, as happened last month.

Gaultier loves to talk, laughs heartily and frequently pokes fun at himself. With glee, he recounts the story about how he almost missed out on the plum job at Hermès. Upon learning that Margiela would not renew his contract, Hermès chairman Jean-Louis Dumas rang Gaultier seeking his advice. Gaultier said he gave him several suggestions, including Hussein Chalayan, before realizing several days later that he in fact wanted the job for himself.

Gaultier’s primary misgiving was that he might not be able to manage the workload, since “I do everything myself,” he said. “But I said to myself that I could learn to delegate.”

A new documentary about Gaultier, by filmmaker Tonie Marshall for the station France 5, depicts the designer as a tyrannical perfectionist, driving his loyal staff almost to distraction by changing his couture designs up to the very last minute and nitpicking even the smallest details related to the show.

Marshall spent some 80 hours filming Gaultier at work, one of a number of extracurricular activities that have consumed the designer over the past year. Other projects included designing costumes for Pedro Almodovar’s latest film, “Bad Education” and stage costumes for the French rocker Johnny Hallyday.

Gaultier laughed when asked if he’s turning into Karl Lagerfeld, the fashion world’s ultimate multitasker. But he insisted he finds an expanded workload creatively inspiring.

“I find that the more one does, the more ideas one has,” he said. “Even the filming of the documentary gave me so many ideas.”

He needs them, as the Gaultier brand is expanding quickly on many fronts, including a young denim and sportswear line launching for spring-summer 2005 under license to Fingen SpA, which also markets Guess Jeans in Europe and Calvin Klein Jeans in Europe and Asia. The Gaultier retail expansion also continues apace, thanks partly to a $23.4 million cash injection in 1999 when Hermès took a 35 percent stake in the house. (Gaultier himself controls most of the balance, with a small percentage held by the family of his late boyfriend, Francis Menuge.)

Potard declined to give precise profit figures, but said the Gaultier company lost money last year as it invested heavily in boutiques, including new Philippe Starck-designed flagships in New York, London and Paris.

At present, there are about a dozen outlets, some franchised, in such diverse locations as Toulouse, Singapore, Taipei, Beijing and Hong Kong. Forthcoming locations include Dubai, Shanghai and a second Tokyo location.

“We focused on Asia for the past three years. Now we will turn more attention to Europe and the United States,” he said, noting that Germany and Italy would be the main priorities on the Continent. “We still have a lot of places to go.”

Expressed in retail terms, sales of Gaultier branded products reached about 570 million euros, or $693.7 million at current exchange rates, last year, with about 45 percent of sales generated in Europe and the Middle East; 30 percent in the U.S.; and the remaining 25 percent in Asia.

Consolidated sales at Gaultier declined 8 percent to 28 million euros, or $34.1 million, in 2003, according to the Hermès International annual report. About half of that is royalties, since Gaultier licenses rtw, knitwear, jeans, fragrances, watches, eyewear and beachwear. Only jewelry, shoes, leather goods, scarves and ties are produced in-house.

Potard said its new Jean’s Paul Gaultier line is expected to be a major growth vehicle, with the first collection set to be shown to the trade in the middle of this month. Accessories, which represent only 10 percent of the business, are also a development priority. The plan is to triple the volume of accessories over the next three to five years.

Not that Potard and Gaultier are gunning to be a billion-dollar behemoth. Gaultier said he has always given priority to his creative impulses — and making clothes people want to wear.