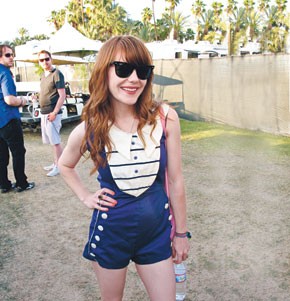 INDIO, Calif. — Sheer, light fabrics were among the survival tools as attendees battled sweltering heat at the Coachella Valley Music and Arts Festival on April 25 to 27.

Los Angeles band Rilo Kiley was one of more than 130 acts at this year’s event, and lead singer and fashionista in her own right Jenny Lewis sported the weekend’s favored outfit — a playful romper — before heading to the stage for her Saturday night set.

It took a rumored $4 million to lure Prince to the Empire Polo Fields to headline the Coachella Valley Music and Arts Festival last weekend, and he was but one of 132 scheduled acts at the three-day affair. Despite triple-digit temperatures, an estimated 50,000 diehards showed up each day to hear artists including Portishead, M.I.A., Mark Ronson, Rilo Kiley and The Raconteurs at the SoCal music fest, now in its ninth year. And leave it to easy-breezy West Coasters not to let a little heat get in the way of fashion. A mix of prairie, hippie and grunge styles prevailed during the long weekend, with a dose of Seventies and Eighties attitude in the form of skimpy rompers and bright shades.

Performers hopped coasts and continents to appear at the festival, and the styles they rocked onstage and off mirrored those of their hipster fans. In preparation for her midday slot on Saturday, U.K. import Kate Nash let practicality and comfort guide her wardrobe — a plaid prairie dress from a thrift store cinched with a red patent belt. “It’s quite light and it covers everything, so I don’t feel weird,” she explained postshow. Designer duds were out of the question for Nash, who prefers casual and secondhand finds no matter the occasion. “D&G wanted to dress me for the Brit Awards,” Nash said, “but I hope I didn’t offend them ’cause I didn’t want to wear their stuff. I like wearing vintage stuff more — I think it suits me better and looks original.”

Originality wasn’t an issue for Uffie, for whom Jeremy Scott whipped up a black-and-white cotton romper especially for her Coachella debut. The Paris-based MySpace queen (104,573 friends and counting), who’s signed to the indie label Ed Banger Records, happily placed herself in the hands of the designer, who also came to the festival with one-offs for M.I.A., Santogold and Yelle. “The thing about working with performers,” Scott said during his fitting with Uffie on Friday, “is that it’s not about me and my ego. So, if Uffie put it on and said, ‘It’s not right,’ I’d be bummed that I messed up but I’d be cool if she had something else to wear.”

Though Scott hit a home run with Uffie, who kept his sexy, zigzag print romper on long after her set, his other three creations never saw the stage — Brooklyn’s Santogold opted for a peacock print romper by New York designer Judi Rosen and punky red fishnets, while French import Yelle, whose debut album dropped here April 1, went with a Jean-Charles de Castelbajac sequined skeleton dress from the fall collection, which she paired with her favorite yellow Reebok Freestyles. Just hours before her performance, Yelle, clad in a breezy T-shirt dress, still didn’t know what to wear. “It’s hard because I have two good choices and I love both designers,” she said. “I just know that when I’m on stage, I want to be free in whatever I wear and also feel cool — as myself and in my clothes.”

Meanwhile, when it came to performance time, the ultrahip M.I.A. — née Maya Arulpragasam — eschewed not only Scott’s one-of-a-kind but proper clothing altogether. On Saturday night she swapped her black overall shorts with a net-like concoction made with strips of reflective tape, topped off with a white wig. No stranger to DIY costuming, the singer explained, “I sewed my dress in the car on the way to Coachella. I was still gluing s–t on while I was backstage.” But don’t call her outfit an afterthought. “There’s a peace sign on the front, which I made with white reflective material,” she said, “so if you take a photo of it with a flash, the only thing you’d see was this peace sign and you wouldn’t really see me. I thought it’s better to have a dress with a message, you know?”

The pint-sized powerhouse Sharon Jones, who performed with her band The Dap-Kings, had no such motives, sartorial or otherwise. Well, aside from showing off her James Brown-worthy moves and custom-made black flapper dress during her Friday night set. (“I’m gonna take off my shoes so I can get loose!” Jones exclaimed to the roaring crowd.) So what did the veteran singer think of the Coachella scene, not to mention the younger artists with whom she shared festival billing? “I just got a laptop last week, so I’m about to find out about MySpace,” she said, sitting in front of her artist trailer after the show. “But that’s for the young folks. I’ve been around before MySpace, your space, everybody’s space — before anyone even decided to space themselves.”