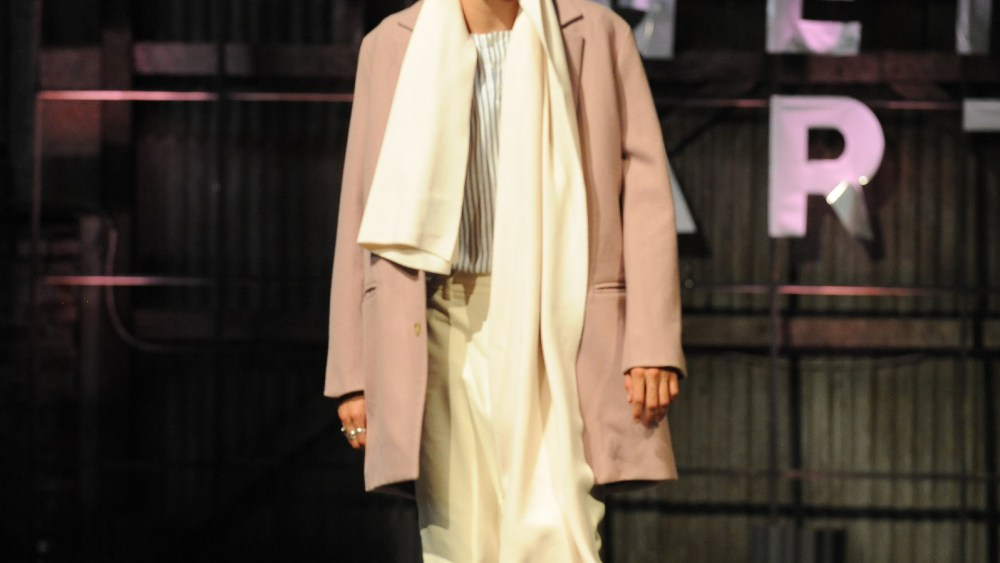 Gen Art staged the return to the West Coast of its Fresh Faces in Fashion show on Thursday night with a bare-bones production that underscored the state of runway events in Los Angeles: promising but not perfect.

In the absence of experienced models, professional lighting and a budget to compensate celebrities sitting in the front row, the fashion, music and entertainment incubator made do with a cleared path that ran the length of Willow Studios’ industrial warehouse, along with lights from a sponsor, which did a spotty job of illuminating the hurried models for the small enclave of photographers congregated at one end. A trio of soccer players from the L.A. Galaxy — Brian Rowe, Baggio Husidic and A.J. DeLaGarza — greeted Gen Art alumna-turned-judge Trina Turk and other attendees who occupied two rows of benches, the standing room behind them and the second floor metal walkway bordering the back wall to take in the shows for Bristol, 34N 118W and Elliott Evan.

As Keri Ingvarsson, the new owner of Gen Art, described the event as a “love letter to L.A. fashion,” each athlete provided a testimonial detailing their credentials as an Angeleno. Husidic, DeLaGarza and Rowe kept their time in the spotlight brief, for they knew that the real stars were the fashion designers.

Representing the men’s label of the year, Bristol’s Tommy Nowels and Luke Tadashi melded their fondness for the City of Angels and the sport of basketball in standard streetwear that had an ease to it. They filled their collection with an olive green bomber jacket, red striped T-shirt and cutoff sweats that seem mandatory these days in men’s lines. But they also offered some surprises, including a mock-turtleneck sweatshirt, a waxed gas-station jacket with an exaggerated collar and an oversize car coat in mauve. Although not as extreme as Thom Browne’s version, the shortened hem they favored for pants “was for L.A., and the climate, and keeping it very utilitarian,” Tadashi said.

For 34N 118W, the women’s label of the year, Jodie Dolan and Kate Anlyan paid tribute to Charles Eames and L.A.’s Arts District with a relaxed, fluid collection that relied on natural fibers such as silk voile. Refraining from designing anything that might be construed as eveningwear, the designers offered clothes that would appeal to an art chick who flitted between extremes. One day she could don a long, printed tunic over skinny trousers; on another she could sport a cropped, striped tank top.

With Elliott Evan, the avant-garde label of the year, designer Elliott Giffis found inspiration in not only his passion for motorcycles but also his fascination with the end of life. Perhaps it’s inevitable for someone to ponder mortality when speeding on a bike. Giffis manifested those thoughts in intricate leather jackets that were ruched, patched from contrasting panels, adorned with high collars and trimmed with fur. He maxed out the macabre with silicone-polymer backpacks shaped like skeletons. “It was dealing with death,” he said. During the finale for Giffis’ crowd-pleasing show, some guests took advantage of the informal setting, sneaking between benches to Snapchat on the floor as the skeleton-carrying models strutted behind them.

Such a scenario underscored how Gen Art showed promise, even if the execution wasn’t perfect. At least it wasn’t guilty of starting two hours late, as other amateur show producers in L.A. have been. To its credit, it enabled creative presentations for the accessories designers of the year. In the footwear category, Taghrid Chaaban Zorob highlighted the colorful flats, sandals, mary janes and boots for her vegan-friendly, sustainable brand Rafa in a playful setting with a seesaw. Legier Biederman, the designer of a namesake jewelry brand, slipped corn and milk snakes into glass boxes with her bold cocktail rings.

Gen Art also lived up to its name by providing a venue for Faarrow, a sister duo of Somalian refugees who recently dropped an EP of their music that sounds like a mash-up of pop and R&B. “If the Fugees and Spice Girls had a love child,” they told the crowd in the parking lot, “it’d be us.”