On a recent shopping spree in Brooklyn, 25-year-old Pierce Nasser wandered over to the women’s side of the Åland boutique, a buzzy, South Korean label named after a clutch of islands in Scandinavia. Hugging an armful of clothing gathered in the men’s section, he turned to the feminine side of the floor, joining his friend Maria Alsadek to browse the full racks of contemporary, midpriced clothing in an otherwise sparse, concrete setting — acid-washed jean shorts, cropped tops with sporty stripes and roomy, tailored shirts.

Reflecting a growing trend of blurring gender boundaries among younger fashion consumers, the pair said they have been shopping men’s and women’s departments for several years.

Here, at Åland’s Williamsburg store — the Korean label’s first outpost abroad that opened a year ago — shoppers have to climb to the first floor to find the classic masculine-feminine divide. The ground floor is entirely gender-fluid, with lip-plumping cosmetics, unisex Hawaiian shirts, handbags and tie-dyed bucket hats.

Gender-fluid fashion has swept the runways, and now it’s hitting the stores, bringing a fresh challenge for an industry built along traditional boundaries — men’s or women’s. The fast-growing men’s category, for example, has spawned entire stores focused on men’s wear, like the Printemps Homme flagship on the Boulevard Haussmann in Paris or Nordstrom’s new 57th Street store in Manhattan.

But with the increasing financial muscle of new generations of shoppers like Alsadek and Nasser who don’t see the world — or at least not their closets — as split up in this manner, department stores are shifting things around, experimenting with fashion-forward spaces that have room to reflect more gender-blending styles and calling for men’s and women’s buyers — still distinct job positions, in many cases — to work more closely together.

When Galeries Lafayette realized a decades-old ambition and opened its flagship on the Avenue des Champs-Élysées this spring, the family-owned department store chain offered the space as a showcase of its fashion-forward thrust — mixing men’s, women’s and unisex sections throughout the floors.

“For this store, which caters to a generation of shoppers who see themselves as reflecting certain values like inclusivity, we wanted to make a statement beyond the runway trends,” said Clara Cornet, creative and merchandising director of the store. Recruited a year and a half before the store opened, Cornet started at the below-ground level, with the toilettes.

“I redid the floor plans — including the plumbing system — to have gender-neutral toilets,” she said. Cornet, who had lived for a spell in the U.S., had taken her cue from the Whitney Museum in New York, which reopened in 2015 in a location with gender-neutral restrooms.

“It really struck me how the museum reflected the evolution of society,” she said, adding that her teams looked at hotels and other actors in the hospitality business.

Design duo M/M, who were brought in to devise store-specific logos for the flagship, were also put to the task of drawing up gender-neutral signage.

“For this store, we decided to merge men’s, women’s and unisex departments under the same roof, which is a first step in the history of department stores — even the stock is mixed together at times, within the same floors,” added Cornet.

Architects from Bjarke Ingel — better known for building headquarters for tech giants — were involved in outfitting the store’s accessories displays, which include a curved, freestanding sneaker wall mixing men’s and women’s shoes, from athletic labels like Nike, Vans and Adidas to fashion brands, including Maison Margiela.

“We worked with the brands to have the entire depth of range and sizes in the same type of offer — it is groundbreaking to have such a mix of sneakers from pure players as well as fashion designers,” asserted Cornet, noting that even Chanel offered men’s and women’s sneakers at the store, a first for the high-end label in France. 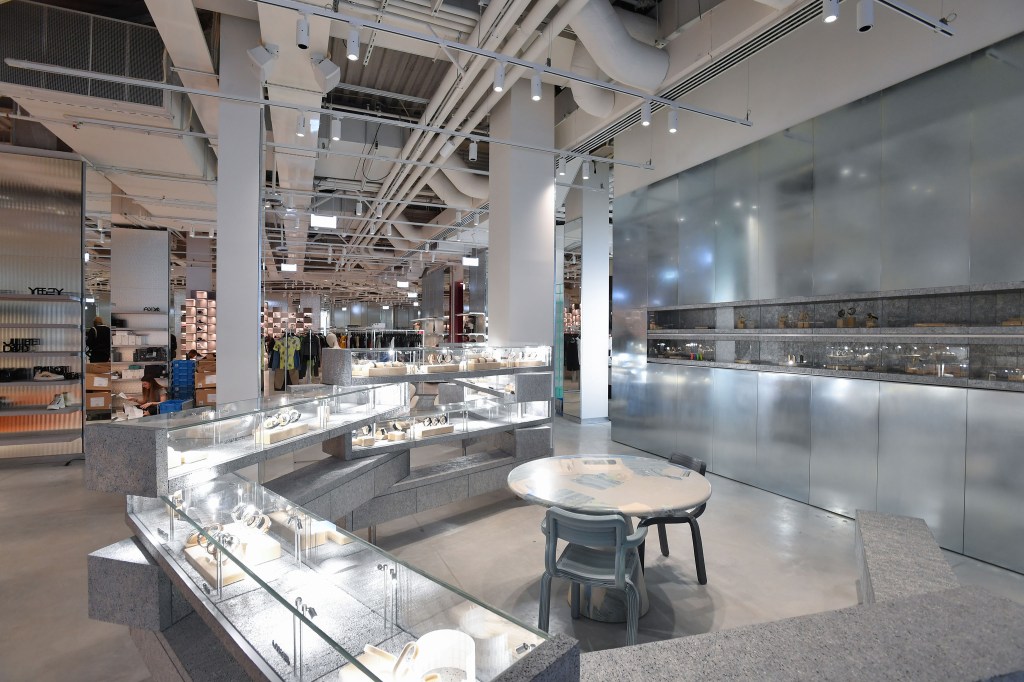 The watches and jewelry section, too, is a mix of masculine and feminine pieces — if dominated by more feminine items — displayed in built-in glass and concrete furniture. On the ground level, the beauty product section is gender neutral, with a balance of grooming and skin care products.

“It’s a well-performing segment of the store — very representative, with the unisex approach, that resonates quite well with local clientele,” said Cornet of the beauty section.

The store is constantly evolving, with large spaces for temporary displays and themed setups. When France hosted the women’s soccer World Cup, for example, soccer uniforms were scattered around the store.

The Champs-Élysées store remains distinct, however, from the rest of the Galeries Lafayette fleet, which includes its Boulevard Haussmann flagship that will follow fashion trends through the apparel and accessories it sells but is not otherwise slated for radical change in its traditional format of displaying clothing along men’s and women’s lines, executives said.

West of the Haussmann store, also lining the boulevard, are the men’s and women’s flagships of Printemps, also keen to cater to a younger, boundary-blurring clientele. This fall, the women’s store will add a new space to the fourth floor called The Market, that will feature fashion labels like New York brand Eckhaus Latta, Amersterdam-based Daily Paper, accessories label Chylak and Gaëlle Drevet’s multibrand collection The Frankie Shop.

“We are looking into how to ‘de-departmentalize’ department stores — they tend to have a very compartmented approach, and while we want to keep this practical layout for clients — if I’m looking for shoes, I go to the shoe department, I want a handbag so I go to the accessories floor — we also want to create little islands in the store that are less compartmentalized, with all the categories of products that correspond to a certain client style,” explained Nathalie Lucas-Verdier, general merchandising director for accessories, shoes and women’s apparel at Printemps.

In the women’s department, the store already has the Maria Luisa-curated space which showcases up-and-coming fashion labels, while ‘L’Endroit,’ in the men’s store harbors the most avant-garde labels.

“We have a dialogue that takes place between the two stores,” she added, noting coordination among buying teams for the men’s and women’s departments, and citing labels like Antidote, that started out in the men’s space but will soon be launched in the women’s department.

“The world is entering a period where borders, boundaries and binaries (gender and beyond) are dissolving rapidly,” concluded researchers at Irregular Labs, a Generation Z think tank that studies consumption habits of 14- to 25-year-olds, in a recent report.

With purchasing power estimated at around $44 billion and growing, according to IBM and the National Retail Federation, Gen Z, or those born after the mid Nineties, are pushing a gender-free approach with their wallets.

Browns in London, like Galeries Lafayette, is another retailer that has a distinct, fashion-forward outpost.

Browns East, which opened in 2017, is a gender-neutral boutique, mixing traditional menswear and women’s wear together.

“We wanted to create a space that spoke to how our customer was consuming fashion today,” explained Tyler Psarras, brand engagement director, in an e-mail.

“Everything is merchandised to feel genderless, with different brands and price points mixed together that aren’t labeled, so you really get to see every item for what it is without preconceived notions of ‘gender,’” she added. Buying teams work together across men’s and women’s apparel, she added, noting that Dean Cook, the retailer’s head of men’s wear, was sure to buy smaller sizes when introducing the Salomon S Lab brand, so that it would be available to all customers.

Indeed, ensuring the right fit can be the biggest challenge to any gender-neutral assortment.

“It can also be kind of hard because men and women have different body needs, women have boobs and men don’t have that, so you need to make the shirts bigger in that sense. But yeah, if it fits, I’m happy to wear it — I don’t care where it’s from,” said Nasser, during his shopping jaunt at Åland.

His friend Alsadek said she was used to crossing over to the men’s section of department stores.

“If somethings’s cute, I’ll get it,” she chimed in. She considered the challenge of organizing a shop floor:

“If you’re already crossing over, why not just integrate it all?”