Pretty is as pretty does and at Olivier Theyskens' Rochas, it touched a nerve that longs for fashion to first enhance and then evoke emotion. 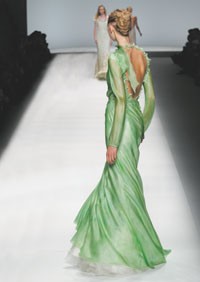 Rochas: Pretty is as pretty does. And at Olivier Theyskens’ Rochas, it touched a nerve — the one that longs for fashion to first enhance, and then to evoke emotion. The collection the designer showed on Wednesday night was a quiet triumph not only of fabulous fashion, but also of an attitude that felt distinctly apart from the main in its obvious elegance. In our era of tacky tabloid princesses and communal glee over bad public behavior, it made for a compelling argument.

The designer’s particular vision is tinged with sobriety and, he said, elements of “a grayish, moody, cloudy life.” Perhaps he thinks real gentility is antithetical to the way we live, or maybe he just knows that a twinge of wistfulness can do a lot for a pretty dress. Either way, it developed into a lineup of gorgeous gowns that picked up on, and eased up, fall’s Victorian austerity, lessening its severity while retaining its sensual currents. With their curves, trains and embellishments, including a palette and prints inspired by Monet’s water lilies, the gowns felt historical, but only vaguely. “I wanted minimalism with references,” Theyskens said, “but not obvious.”

He also has a business to develop, which he is doing on his own terms. While so many designers rush to do everything at once, Theyskens has developed his vision for Rochas gradually, exploring mini themes over a span of several seasons under the arc of his romantic, subtly Goth vision. Thus, until now, evening has been his primary focus. With that area just about perfected, he introduced day clothes for spring, dusty-hued pantsuits in cloudy washed fabrics worn with simple, feminine blouses. These made a lovely, understated complement to the eveningwear — and an intelligent extension to the Rochas vernacular. Savvy is as savvy does.