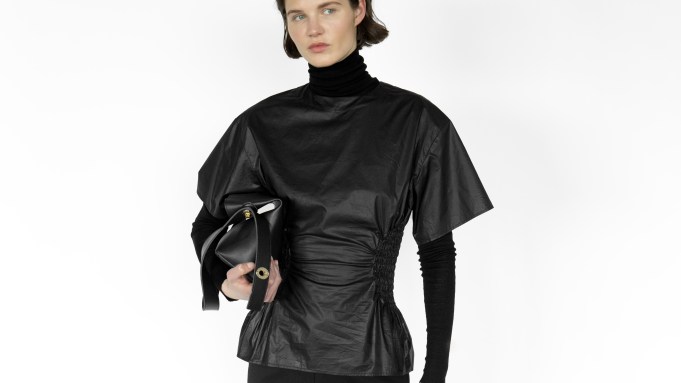 Socks and sandals: That’s the cliché that often comes to mind along with the phrase “German fashion.”

Despite having a domestic fashion industry that contributes an estimated 66 billion euros to Germany’s gross domestic product annually, the European nation is better known for well-engineered cars and energy-efficient washing machines than any wildly creative designs.

“German fashion is not, and never has been, overly decorative,” the owners of a German heritage brand, Merz. B. Schwanen, confirmed. “Instead it’s easy-going, practical and wearable.”

But today, an international apparel industry with an existential crisis is seeing more demand for exactly the qualities that many German apparel makers already pride themselves on.

An April 2020 survey of changes in consumer attitudes post-pandemic by the consultancy McKinsey & Co. found that around two-thirds of those polled worried about a brand’s sustainability when considering a purchase. McKinsey’s survey, which questioned 2,000 shoppers in the U.K. and Germany, also discovered the majority were no longer as concerned about “newness,” or the seasonality and trendiness of clothing.

Additionally, 65 percent of the respondents said they were planning to purchase more durable fashion items and 71 percent planned to keep the items for longer.

So with consumers wanting to “buy less, buy better,” could the German brands formerly seen as boring by some become flag bearers for this new movement in fashion?

As the country’s first Status of German Fashion report noted, German fashion is less visible on the world stage than that of other nations.

“This may be in part because the country has its specialty in functional clothing, with less of a modern tradition than other countries have for avant-garde designs,” the January 2021 report, coauthored by the Fashion Council Germany and the consultancy Oxford Economics, explained. “Functional design at a middle-market price point is a key source of demand in Germany’s fashion industry.”

It’s about history, too, suggested Julia Leifert, a Berlin-based designer who specializes in high-end looks, produced locally in small quantities, for her eponymous label. “Germans are still strongly influenced by visual styles such as Bauhaus and Modernism. We have more of a connection to function, workmanship, technical materials and innovation. Which in turn, affects the country’s understanding of design and explains the preference for clean lines,” she told WWD.

At the same time, Germans have been doing sustainable for years. For example, Hess Natur, an eco-friendly clothing company based in Butzbach, central Germany, was founded in 1976 and established one of the world’s first eco-cotton initiatives in Egypt in 1991. That likely makes it one of the oldest eco-labels around.

So, as the State of German Fashion report argued, “the [German] industry is well placed to respond to the trend toward sustainable fashion. Quality workmanship ties in with customers buying fewer, higher-quality items that will last a long time,” the writers continued.

“German fashion has never really had its breakthrough moment at the international level,” agreed Wibke Deertz, the Berlin-based designer of A.D. Deertz, a men’s wear label she describes as seasonless, that’s made from sustainably sourced fabrics in Europe. “This could be a chance, although German designers tend to have a hard time pushing through at the international level. On the other hand, there have never been so many good examples and role models, where creatives stay true to their ideas but are also economically successful.”

She referred to German brands like the increasingly popular Armed Angels, a sustainable women’s wear range from the city of Cologne, and Rotholz, a streetwear brand and design studio based in the city of Potsdam.

“German consumers tend to be careful,” Deertz continued. “There’s this cliché about long-lasting products and careful production. Solid, like our washing machines,” she joked. But that cliché could evolve into something quite valuable for the German clothing business, she noted.

Certainly there’s a trend at the moment for reviving what may best be described as German heritage brands that are stylish but also somehow plain-spoken.

Retailer Manufactum, founded by a former Green party leader in 1988 and sold to e-commerce giant Otto in 2008, has made its fortune selling a huge range of household goods and clothing, where every product seems to have utility, efficiency and quality in common.

Other examples include Manheimer, a pre-war, Jewish-owned formalwear brand that relaunched in 2019; Schiesser Revival underwear; Haferl, Dinkelacker and Zeha handcrafted shoes, and Merz. B. Schwanen, which is bringing back vintage German workwear, T-shirts and sweats, produced on original, vintage knitting machines in the Swabian Alps.

Gitta and Peter Plotnicki, the owners of the Merz. B. Schwanen brand, say they’ve definitely seen increased demand during lockdowns for loungewear and relaxed clothing. However, the couple also believe it’s about more than that.

Sustainability implies wearing your garments for a longer time, they told WWD. That’s something that’s easy to do with their classically styled sweats and T-shirts, which retail from around 50 euros.

“Our experience also shows that our clients also genuinely like the German heritage behind the brand. They like that our core range is made in Germany and they even like the traditional German logo and name, even if it’s a bit of a jawbreaker,” conclude the couple, who have collaborated with the likes of Junya Watanabe, Nigel Cabourn and Monocle in the past.

“But are the sectors to which German brands usually appeal changing? We can’t say for sure right now. But we do get the feeling that more German fashion brands are gaining in meaning and impact due to, among other things, rising demand for more sustainable and socially conscious products,” they agreed.

Designer Julia Leifert is more confident. “When we have the climate crisis to think about, and as the apparel industry is being forced to reorganize itself, I really think German design has huge potential,” she said. “In the future, we’re going to need more brands that care more about high-quality, long-lasting design and less about mass production. We’ll need companies that work with innovative materials and technologies. German brands can certainly be successful in that respect.”

When it comes to “Made in Germany,” Berlin’s fashion week is a little different, the event’s organizers told WWD. Designers in the city, which is renowned for creativity, art and culture, might not always want to associate themselves with that more staid and sensible image.

At Berlin Fashion Week, “we’ll see creations that are far removed from any association with supposedly conservative German fashion,” Tanja Mühlhans, director of the city senate-supported Project Future, insisted. “Brands here [in Berlin] also profit from the quality with which German handicrafts are associated,” Mühlhans said, but Berlin’s designers also “inspire with their visions and their aesthetics.”

In one way, the Berlin brands do have similarities with more conservative makers from elsewhere in the country though: there will be a focus on sustainability at the Berlin event, too.

Berlin Fashion Week will run from Sept. 6 to 12 and the schedule involves a dizzying array of online and in-real-life events, for everyone from ordinary shoppers to media and buyers.

Still, it’s hard to know how many international visitors the collection of events will draw. The Premium trade fairs, which usually brought buyers from further afield — and thereby apparel sales — to the German capital, moved to Frankfurt this year.

To entice visitors this time, the city has collected any and all significant fashion-related events and bundled them together over one week. The About You fashion show for the general public featuring popular retailers like Levi’s and local influencers drew huge crowds of young shoppers last time it took place. Online activities by one of the world’s leading streetwear sites, Highsnobiety, will likely bring fans from around the world to their screens, and a mixture of off- and online panels, art exhibitions, parties and runway shows will doubtlessly keep everyone else entertained.